Bad Bosses: A Guide To Excusing Yourself From Abuse 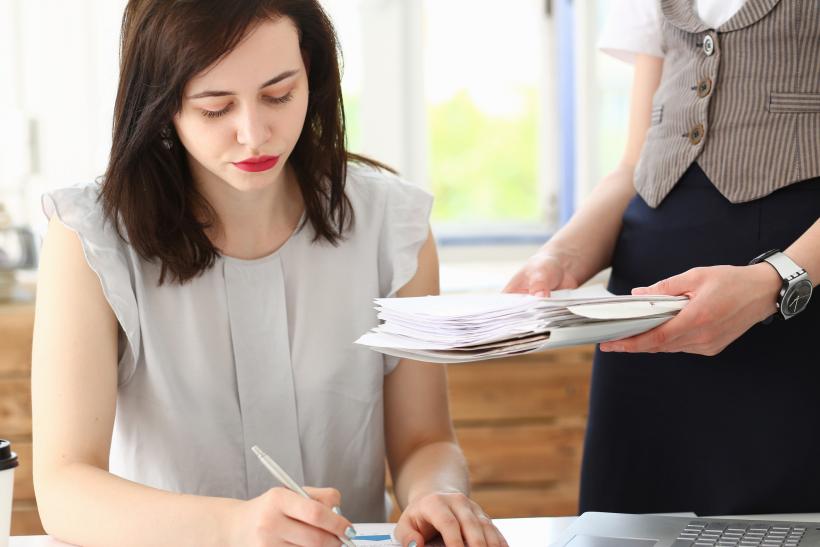 I’m so glad I’m no longer letting myself be someone else’s collateral damage.

Last year, I quit a terrible job where I was extremely unhappy. My boss was verbally and emotionally abusive, and our days tended toward 12-plus hours without any real reason other than, it seemed, our boss’ desire to have control over our lives and the extent to which being her employees defined us. While I don’t love how it looks on my resume, I’m glad — impressed, even — that I got out after only six months at the company.

After I left, there were a blissful few weeks of freedom — I went south for a writing workshop, and then came home for Thanksgiving — before I started to process the preceding six months.

I found myself becoming increasingly, retroactively angry about what had happened at the company — to me and to everyone else who worked there.

I imagined writing my ex-boss an angry email to let her know exactly what I thought of her treatment of her employees. I envisioned running into her on the street and giving her a piece of my mind. For almost a year afterward, I had bad dreams at least three or four nights a week about such encounters, or, worse, about scenarios where I was back at the company again, powerless, under her command.

More often than any of this, though, I fantasized about writing her an impassioned email to try and make her understand how bad she had made me feel (not to mention unmotivated). More than anything else, I wanted her to know that the way she treated people was not OK — that no matter how big or popular her company became, it would be meaningless if she left a bad taste in the mouths of people who encountered her.

This wasn’t the first time I’d had a sticky situation with a boss, and that very fact is, I think, what rendered me so stuck and frustrated for so long this time around.

I’d had a boss, years before, who had been perfectly good to me until I moved to a new city to start graduate school. I kept working for her, remotely, on top of taking graduate classes and student teaching and lesson-planning, until finally I told her I needed to focus on school and, sadly, couldn’t work for her anymore.

She pushed back but finally agreed. We settled on a few final projects I would complete for her. But in those last few weeks that I worked for her, she became brusque, demanding work be turned around faster than I was able to complete it, even though I had always been a swift editor and prompt with deadlines. Finally, in response to one particularly ungenerous email from her, I wrote back to her, frustrated, with an explanation of why I couldn’t turn things back over to her as quickly as she seemed to want me to suddenly. I described my schedule to her and reiterated that this was precisely why I couldn’t and shouldn’t work for her anymore, though I wished I could.

Her response: “I get it. This is far too much for you.”

She proceeded to warn me to avoid raising children, being a wife, or writing for a living — because, in her words, “that would kill you.”

I was shaking by the time I finished reading the email. I spent the week intermittently seeing red and nearing tears, and finding myself on more than a dozen occasions with my phone in my hand, my thumb hovering over her number, ready to call her up and tell her exactly how her words had made me feel.

Ultimately, my best piece of advice came from my mother. I had drafted several different responses to my boss's email — some of them just cathartic gut-spills that I did not intend to send, that I wrote mainly so that my mom and I could laugh a little — and my mom said, serious, “You shouldn’t write her anything.”

I asked why. She said, “You’re trying to appeal to her as though she is a reasonable person, and you’re being kind. She’s proven that she is not, and she most likely meant to provoke exactly the reaction she has. There’s no point explaining to her what she already understands, and did on purpose.”

(In the end, I took a cue from a friend who said that when someone said something wildly inappropriate or rude to him in person, he would say, “Oops,” and walk away. It was one of the best emails I’ve ever sent.)

The thing to understand about people who treat you badly is that, most of the time, they know exactly what they’re doing, and they don’t particularly care about making you feel bad. Sometimes they even say what they know will get to you because they want you to squirm.

Some people are mean and manipulative because it works for them, and it’s always worked for them, and they won’t stop until it stops working.

This is why explaining to people who are mistreating you that they are mistreating you doesn’t work. They know! That’s exactly how they wanted it. Or, even if their ultimate goal wasn’t to hurt your feelings or drain your energy or lower your self-esteem, it was collateral damage on the way to getting what they wanted from you: your time, your obedience, your submission.

My impulse to tell these two bosses how they made me feel was ultimately futile because they didn’t care about my feelings. I think that, for some reason, they thought the rules of human decency just didn’t apply to boss-employee relationships. Or maybe their success had gotten to their heads, and they felt that they were too busy or important to treat people well.

The reason they are the way they are doesn’t matter. Rather: it stopped mattering as soon as I decided, firmly, that I did not deserve to be treated that way, by anyone.

I know myself to be a hard worker and a loyal one, but being a good employee doesn’t require you to sacrifice your sense of self, your health, or your sanity for the company you work for.

It’s not your company, and you’re not a computer. You’re a human being, and your boundaries are wherever you draw them, and wherever you need to draw them is OK. If that’s not OK by the people you work for, you’re much better off somewhere else.

It took me half a year to stop feeling afraid of the notion of working for a company. It took even longer to stop having bad dreams about my boss. Even now, I occasionally have that fantasy of running into her on the street and doing precisely the right thing to let her know how little regard I have for her: we’d run into each other, and I—and I’d—why I’d—

But that’s exactly it: there is no right thing to do because what she deserves is not another ounce of my energy spent thinking about her or imagining the perfect thing I could say.

That’s something they’ll have to figure out for themselves. Which sucks, because the fantasy of getting that last word is tempting, but the absolute best thing you can do — as cheesy as it sounds — is to live a better life than they do.

On occasion, because I’m still friends with people in circles that my former boss of last year runs in, I’ll see her on Instagram, and I’ll navigate to her profile, out of sheer morbid curiosity. A year down the line, she strikes me as self-conscious and neurotic in a way that allows me to finally see what’s really happening: she is destroying herself from the inside out, and bringing everyone near her down with her.

I’m so glad I’m no longer letting myself be someone else’s collateral damage.

If you like this article, please share it! Your clicks keep us alive!
Tags
bad boss
boss
work
stress
workaholic
abuse

5 Better Things to Say Instead of 'I'm Sorry' At Work

5 Signs Your Work Stress Is Decreasing Your Quality Of Life

Bad Bosses: A Guide To Excusing Yourself From Abuse
Molly Guinn Bradley