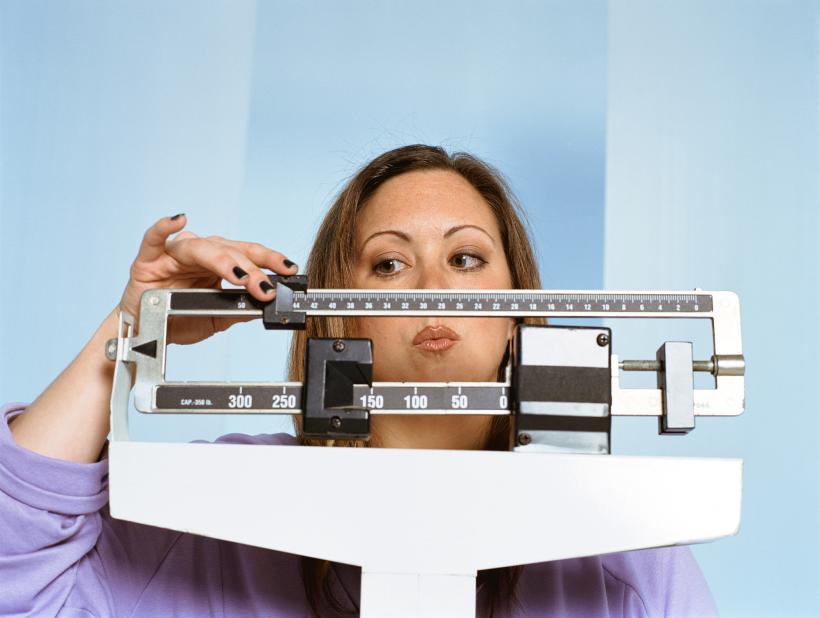 Weighing someone with witnesses isn’t just an evasion of privacy; it’s embarrassing.

I’m sitting in a medical office waiting room that could have been decorated in the late 1970s with its dirty beige and military green walls, and uncomfortable metal chairs. The room has a cheerless and oppressive feel and isn’t a place that you want to be in any longer than necessary.

A nurse opens the waiting room door, and reads off a list of names, mine included.

“Come on back,” she says. The five of us jump up in unison and follow her as she snakes her way through a maze of halls and ends up at a scale. Then, as we all watch, she weighs each one of us, saying our weight loud enough for the entire group to hear.

I’m stunned that there’s no curtain to separate us, no discretion, and that she has no awareness that any of us might not want to share our weight with a bunch of strangers. I know that running in the opposite direction isn’t a viable option.

Welcome to my nightmare. This is what I imagined Weight Watchers to be like, but even they are sympathetic enough to realize that getting your weight outed can be very upsetting for people — even those without body issues.

Because weighing someone with witnesses isn’t just an evasion of privacy; it’s embarrassing.

I’m unlucky enough to have several doctors who think that an assembly line of vitals-getting is an efficient way to process patients. As far as I can tell though, weighing en masse isn’t more productive than just weighing everyone one at a time.

I’m grateful that I have medical insurance, but does that mean that I shouldn’t be my own advocate if something makes me feel uncomfortable?

I know there are far worse injustices happening in the world, but getting weighed in front of people smacks of fat-shaming, and feels incredibly invasive. Look, I don’t share my weight with my boyfriend, why would I share it with a bunch of people I will never (fingers crossed) see again?

Most of the time, I do my Oh-I-suddenly-have-an-urgent-need-to-go-to-the-bathroom ruse which has worked out well in the past; not only didn’t I have to get weighed in front of anybody, but the medical assistant often forgot to weigh me at all.

Maybe getting weighed in front of a crowd doesn’t sound that bad to you. Perhaps you have no qualms about stepping on the scale because you don’t care anyway; you weigh what you weigh and that’s okay. Good for you, and your body-positivity, but sometimes all the self-confidence in the world still won’t prepare you for something that I like to call The Commentary Show.

For the purposes of this story, instead of saying my actual weight, I’m going to use the word kittens. For example, “I weigh kittens,” or “Did you get that kitten bag of potatoes I asked for?”

If BMI was measured by kittens, we’d all be a lot happier.

After waiting an hour in another over-crowded waiting room, a nurse holding my chart finally opens the door and calls my name, or what passes for my name. Eager to get out of there, I don’t correct her; she could have said, “Crystal Sconewald (it’s happened) and I would have answered to it. I follow her to the scale which is directly in front of a whole row of people seated in chairs — an audience of patients. I panic a little when I see the group, but decide to suck it up. I don’t take my shoes off (to weigh in a little less) as I usually would, thinking that the quicker I get on the scale, the quicker the weigh-in would be over.

The scale is the old-school kind where it has to be carefully adjusted. The medical assistant appears to be having a difficult time with getting the correct reading. She moves the slider back and forth, huffing in frustration as if I am deliberately trying to fool her. At last, she stops and says in a loud voice, “You weigh kittens. Why didn’t you tell me you weighed kittens?” Instead of taking me to the examination room, she sits me down between two of my weight-witnesses and continues her monologue, “I can’t believe you weigh that many kittens. I thought you weighed so fewer kittens.”

I sit there silently willing her to shut up. No one asked for her opinion, just for her to do her job, why is she still going on about this? The rest of the appointment passes without incident, but I feel the burning shame of my huge number of kittens for the rest of the day.

Then, luckily (or so I think) my doctor moves offices, and, for a while, it’s just a nurse and me when I get weighed (giving me the opportunity to do my comedy bit of how many layers of clothing can I take off before I step on the scale, and still be decent?).

Then the group weighing thing starts at that office.

Like many fat people, I dread going to the doctor because I don’t want to be weighed, so knowing that I’m going to get weighed in front of other people makes the experience even less appealing.

I’m already stressed, why should I go along with something that I find demeaning just because I feel as if I need to be a good patient and not do anything that will cause any trouble? Once again, I’m desperately trying to be a good fat person.

However, there’s only so much inadvertent fat-shaming I can tolerate, so I do some research and here’s what I find out — it’s in my rights, as a patient, to request to be weighed privately, or even more shocking, I can refuse to be weighed.

As long as being weighed doesn’t have anything to do with pre-op protocol, isn’t pertaining to medication doses, or isn’t in regard to a life-threatening condition like kidney failure or congestive heart failure, I can opt out of visiting the scale.

It never even occurred to me that I had any choice in the matter.

From now on when I go to the doctor for something simple, I’m going to be a conscientious objector to getting weighed and practice self-care.

I’ll stand up for myself — I just won’t stand on the scale.

If you like this article, please share it! Your clicks keep us alive!
Tags
weight
weight stigma
body image
body image struggles
fat-shaming