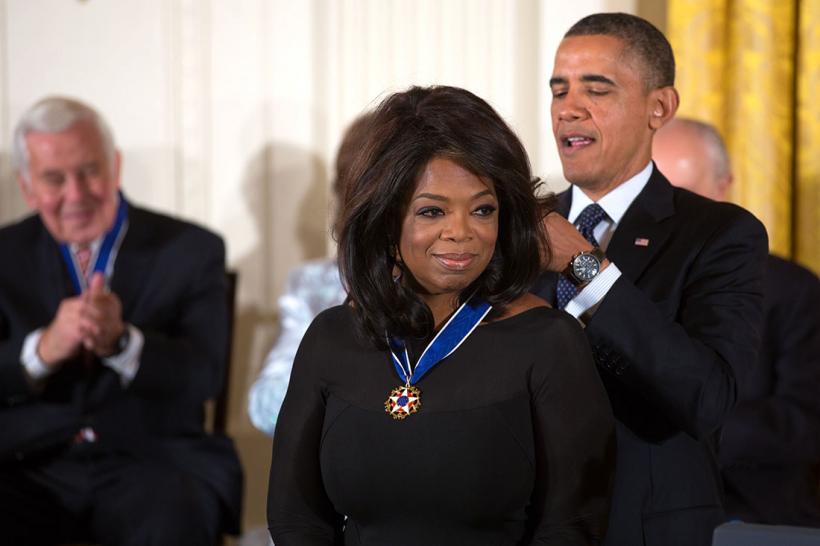 Oprah and The Pres. (Well the Used-To-Be Pres. Insert weeoping)

Today in, I Don’t Really Know What To Say About This: Oprah Winfrey talks about self-acceptance and weight loss and where she draws the line.

Oprah, best known for the daytime talk show she hosted for basically 50 years, secondarily known for owning 10% of Weight Watchers, has some things to say about her weight. Mostly that, while she loves and accepts herself, she can’t really accept herself at a weight over 200 pounds.

In January 2017, after losing 42 pounds, Oprah said she didn’t care how much she weighed:

“When the weight started to come off, I needed to get clear on my intention. I could lose weight to fit a dress size, or attend an event, or to make other people like me. But I couldn’t keep it off for those reasons. I always put the weight back on. This time I changed the intention to, ‘I want to be the healthiest I can be – physically, emotionally, spiritually.’ So the process and purpose of losing shifted for me. It was easier, because my intention was clearer.”

“Before, when I was 150 pounds, I’d imagine getting up to 200 lbs., and think, ‘Oh my God.’ But now I think, ‘I never thought that at 200 lbs. I could look in the mirror and love my body, love myself, not chide and minimize myself for being 200 lbs.’ At 200 lbs., I was OK. I have never, ever, ever been at that point. And then at 190 lbs., I was OK. If I don’t lose another pound right now, I’m still OK. The fullness of life, the fullness of being, the self-acceptance — I’d never done that before. I’d always beaten myself up because I was tied to a number.”

And now, from the Queen of Daytime Talk:

“This whole P.C. about accepting yourself as you are — you should, 100 percent, [but] for your heart to pump, pump, pump, pump, it needs the least amount of weight possible to do that. So all of the people who are saying, ‘Oh, I need to accept myself as I am’ — I can’t accept myself if I’m over 200 pounds because it’s too much work on my heart. It causes high blood pressure for me. It puts me at risk for diabetes because I have diabetes in my family.”

So she DOES care about how much she weighs, but ONLY if it’s over 200 pounds?

Maybe she changed her mind? Maybe she wasn’t really sure what she wanted to begin with? Maybe she's only thinking about the 10% of Weight Watchers that she owns and the money she stands to make when the droves of people who weigh more than 200 pounds sign up today (her windfall is up to $340 million btw, 7.9 times her original investment)?

Regardless, now everyone has many versions of Oprah available for quoting. They’ll call her a capitalist, or a liar, or a savvy business woman, or a victim. What they probably should call her is human.

Because this is real life, and real life is real complicated.

The intersection of bopo and health and body acceptance are where things can get complicated for everyone, even, especially, for the folks in body positivity who aren't billionaires.

At some point does being body positive shift to being health ignorant?

Wading through the water of bopo can often feel more like trudging through wet cement. It’s a confusing place to live — I love myself as I am. BUT I also love to walk and move and run. And I don't want to diet because diets fail, but I want to be smaller so I can move better.

And now what do I do?

At a certain point, my weight and the lifestyle that’s important to me have to intersect. When my body keeps me from doing the things I love (in my case, walking a three mile parade route with my son, the drum major of his high school marching band), I have a choice: Either I love my body as is, make no changes and accept the loss of whatever freedoms I value, or I say, I love my body, but love sometimes means doing things that are hard.

When faced with this choice, I chose to make changes. I wrote about it. I had very real, very important reasons to invest time in changing my health.

I didn’t have to change my diet significantly (I did have to not eat a hot fudge sundae every day). Going to the gym, drinking lots of water, sleeping, adhering to my med schedule, was enough to get my body back to a state that feels mostly comfortable to me. Maybe I'm lucky that way. Results not guaranteed, and all that.

But now I’m going to tell you something shocking — if I could never ever eat another cookie or piece of cake or a hot fudge sundae or even a damn teaspoon of sugar in my coffee for the literal rest of my life, but I could walk those three miles next to my son, guess what?

This logic also applies to bread, booze, carrots, Costco muffins, always watching TV, never watching TV, if ANY of these things impacted my ability to be with my kids, guess what? Kids win. Every single time, against anything except another one of the kids, kids win.

This might make you angry. That’s fine; you’re entitled to that.

But I am also entitled to decide that eating cake (or drinking a martini, or whatever) is not that important. Just as I am entitled to decide that the risk of alcoholism (and the risk of destroying my family via it) is enough to make me avoid tequila. Just as I have decided to responsibly adhere to my psychiatric medication regimen. Those medications (for the most part) keep me from being suicidal. They (for the most part) keep me from making really bad decisions. To be non-compliant would be both foolish and irresponsible. To ignore the health implications of anything I do, would be selfish.

Food is fuel, not life.

I’m not alone in this sentiment, though it usually seems like it because every time you say something about food and fat, you’re automatically fatphobic and full of shit.

But truly, food is just fuel. This is the only body I get, and these are the only kids I'll get to run after. So if I can run, I will. At one point, I could barely walk. I won't live that way if I don't have to.

Oprah's max of 200 pounds or whatever, is arbitrary and makes it seem that there's a magic number at which health is attainable, which isn't the case. But if 200 is the number that's her max, that's her decision. As for me, I’m concerned with my overall health and emotional well-being and how I preserve it, not the scale. I'm concerned with being able to engage in the activities I love.

I have the very real privilege of health. And I have the very real privilege of knowing that greater health and wellness is in my control at this time of my life. What will life look like for me in 20 years when I'm 63? I don't know. I do know that 23-year-old, 20 years ago, me would not have predicted the physical difficulty or emotional complexity that 50 or 75 pounds would cause. I know that I wish I could tell that person to stop dieting and start listening to her body's cries for attention.

But Ashley Nell Tipton learned very quickly what happens when you decide being fat isn't working for you. Ashley made a choice, probably a really hard one, to risk criticism, even hatred, in an effort to protect her long-term health. Presumably, the fear of the loss of livelihood was not greater than the fear of loss of health. One is not worth the other.

And food is not worth it to me. I don’t have a comorbid disease to consider, but if I did, like my friend Julie who went keto, and ultimately reversed her type 2 diabetes, you bet your ass I’d do whatever I thought might change that. Even if I had to change how I eat, even if gastric bypass seemed the only viable option.

I think where we run into real trouble is two-fold.

1. Correlation is not causation. That is, fat does not automatically equal "in poor health." That's for each person, and their care-providers, to decide.  BUT sometimes your size does impact your well-being, and then you need to figure out what to do with that information.

2. When we conflate the idea of dieting for weight-loss with the need to make changes to improve health. Those choices don’t automatically point to calorie restriction through a weight-loss plan like Weight Watchers. They might point to more generally habit changes, water, sleep, and so on.

Health is a relative state of being. What I do to obtain or maintain mine may differ from what you do, or what Ashley does or what Oprah does. Because that's what relativity is.

This isn't any sort of endorsement of Weight Watchers — the opposite, in fact. I hate Weight Watchers. The list of reasons I hate it is long, but nowhere near exhaustive. Primarily, for me, WW, when layered on top of a mental illness, pushed me into an eating disorder. But that’s what Oprah chose (maybe because she feels comfortable with it, maybe because she owns it and loves money). And it worked for her. (Like 11 times? So, not really.) Will this one stick? I don’t know. Statistics say not, but statistical likelihood of success isn't the only thing that’s important to talk about.

It’s equally, if not more, important that we talk about ways we can positively impact our health and wellness in ways that don’t involve the traditional and ineffective calorie-restrictive weight-loss plan.

And it's also important that we remind ourselves that even the richest woman in the world is still just a person. She is still sometimes frightened about her health; she is still sometimes worried that she'll lose it. The vast majority of the time, money, not even a lot of it, can save you from death; death is a common denominator.

If you like this article, please share it! Your clicks keep us alive!
Tags
Oprah Winfrey
weight loss
diet
Weight Watchers
health
wellness