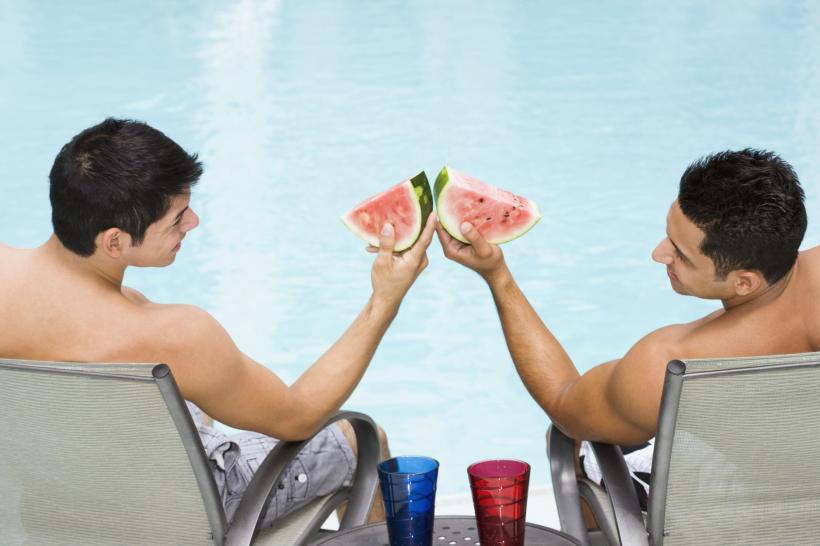 Summer's almost here, and, unless you live in the foggy tundra that is San Francisco's July, it's going to get HOT. What better way to stave off the oppressive rays of heat than indulging in a juicy watermelon?

We all know watermelon is d-fucking-licious, but did you know it's also good for your sex life? That is, as long as you have a penis or date people who own one.

Tell us more about this magic fruit Giana!

Watermelon contains a hefty amount of this amino acid called citrulline, which helps with, er, performance. Fit folks often use it when exercising, though there's insufficient evidence to prove that citrulline has a positive effect on the workout. For a penis, however, citrulline is proven to be awesome!

See, citrulline is a useful little amino acid. It converts to arginine. Then, because our human body is a complicated organism and basically is always up to shit, it converts arginine to nitric oxide, which in turn, improves your circulation by helping your blood vessels relax. For men who suffer from erectile dysfunction, this can offer a bevy of goodness to their manhoods. Why?

The body needs a lot of blood to maintain an erection—and dilating the vessels can help. Actually, boners typically have twice the blood pressure than the rest of the circulation, so allowing for more blood flow can do wonders. In fact, this isn't too different from Viagra's effect on the body.

Cool, right? Beat the heat and the meat! Rats! Not so fast, chica—erectile dysfunction is a complex issue.

Inadequate blood flow is one of the many possible roots of the problem. Sure, it crops up in correlation with other bigger issues—like in smokers or diabetics—but there are other roots as well. Neurological diseases, such as Alzheimer's, can severely impact the action down south. Then, of course, there are hormonal reasons: depression and anxiety are huge culprits as well. Even a particularly gnarly case of low self esteem can prevent a man from reaching 12 o'clock.

So, should you force-feed your man some juicy goodness if his member is missing out on the midnight strike and ringing instead around 7:30? It wouldn't hurt to try, but don't depend on it for the big O of your life or anything.