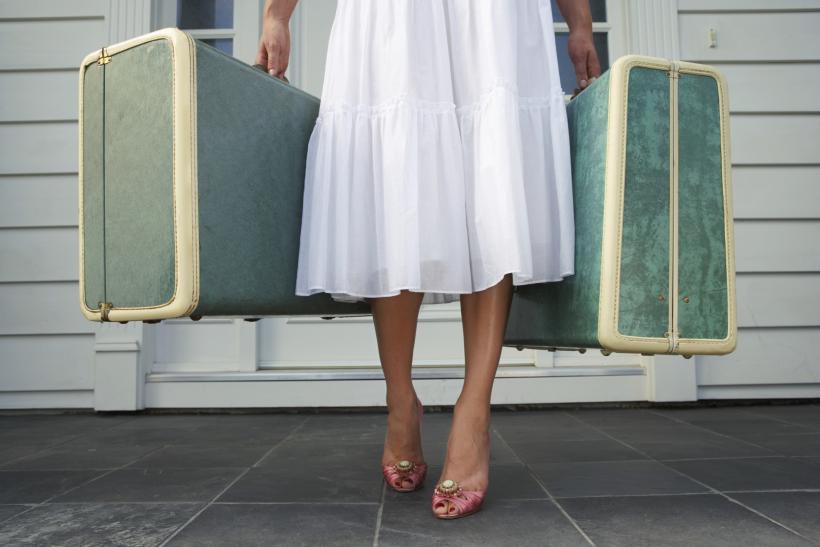 The value of social media campaigns is ever-evolving and ever-debatable. Is this truly a good way to discuss grave societal issues or garner support? Lately, we've seen #NotAllWomen, then #IAmJada, and now, #WhyIStayed and #WhyILeft.

What's the latest intention behind these pithy, but harrowing tweets? Raise awareness about domestic abuse in the wake of the released Ray Rice videos. Complicating things further—and making us feel rather depressed in the process—Janay Rice herself has issued a public statement pledging her loyalty to Rice and shaming the NFL for cutting him. In her words, they did so to "gain ratings."

For all Janay's seeming composure in her decision to stand beside her man, there was undoubtedly conflict in her reasoning and for this reason, I like the hashtag duo #WhyIStayed and #WhyILeft. Abuse is more complex than generally acknowledged—its vicious cycle is capable of entangling even the most logical of minds.

Boiling these ideas down into short tweets spreads awareness and offers insight into what seems to many, a dubious headspace chock full of self-loathing or acquiescence to abuse. To everyone out there who says—"but she stayed, so it must be okay"—here are a few gems for your elucidation:

#whyistayed: I didn't want to fail at another relationship #whyileft I decided I'd rather be alone than spend another week with my abuser.

Pretty sure they didn't want to be in such relationships. Also pretty sure that wondering if you're going to die by the hands of your lover isn't really OK either.

The emotional abuse I endured is significantly less headline-grabbing, but it affected me nonetheless. *Thad and I were friends long before any hint of romance ignited. We went to the same parties together, and constantly found ourselves sequestered off in a corner sharing private jokes.

Eventually, Thad asked me to be his girlfriend in an extravagant way (take note, future fiance o' mine), and I giddily said "yes" about a hundred times. The excitement was intoxicating. I went to a party at his family's house and brought him a flower. Thad beamed. We kissed and I felt my thumping heart shoot ecstatic beams through my body. We went on a beach trip with friends, only to ditch them and make out in the dunes. The same friends cheered for our budding romance. We visited his family and drove his young relatives around, and I imagined the two of us doing the same with our future kids (who, admittedly, would have been damn cute . . . at least in my mind's eye).

The changes didn't happen overnight. Things shifted slowly. First, Thad nicely asked me to put more effort into our relationship. Um, of course! I ran around (sometimes literally) to make him happy. He never was. In condescending tones, Thad would sigh and say, "Gee-AW!-na" and proceed to tell me everything that I had done wrong. I believed him—why wouldn't I? The fact that we were friends first and had the support of others made me believe he had my best intentions at heart.

Soon I "learned" that I was not only terrible at making Thad happy, but I was incapable of doing anything right. The way I ate, talked, socialized and thought were all . . . bad. I needed to change. When my friends would visit, Thad would shower me with affection and attention, but speak cruelly to them. He was being nice to me; I was special.

Sadly, Thad's cruelty to my friends didn't end there. After they'd left he'd tell me horrible things they had said—how dare they!—which I later discovered were all lies. Thad would also helpfully overanalyze their words to me and point out how manipulative and "mean" their subtext was. A friend saying, "I know you'd love this band, you should listen to them!" was quickly translated into, "You can't think for yourself and you have terrible taste in music."

Thad was quick to say he was "looking out" for me. Had I really been blinded by such terrible people all these years?

I was so confused. My friends had given this relationship their blessing, but they were—apparently—bad people. Thad was mean, but he was saving me. My assumption? I was a bad person and I attracted bad people. I deserved this misery, but I would bear it like a martyr. Go me!

Little by little, I had no friends left. One yelled in my face before storming out of class. Others were polite, but distant. Thad openly flirted with my best friend in my presence, and I constantly felt I had to win back his approval. Please look at me! I'd scream silently. I'm pretty and fun too! Just give me another chance!

I tried breaking up with Thad on numerous occasions. Each time, he'd remind me of all my faults and that I was lucky to be forgiven. Strangely, I craved his approval. So it should come as no surprise that these conversations largely ended with my frantic, apologetic tears and copious kisses.

Finally, the weight of the situation hit me. I was crying alone in my bedroom with the lights off, when it occurred to me: I had completely changed as a person, but I wasn't happy. I felt robbed of my former self. Tearfully, I called my best friend and asked her to come visit. Despite the way I had treated her, she didn't hesitate. Later, she'd tell me that I was unrecognizable when she found me.

I knew it was time to break up with Thad. I took out some notecards, and wrote an outline of a breakup speech on them. Then, I broke a cardinal rule: I called him to end the relationship. I knew that if I saw him in person, he'd talk me out of it again. After I did the deed, I ripped the notecards into teeny pieces and cried in the street. Despite everything that had happened, I still wanted to be with Thad more than anything else.

Honestly, I was in such a bad place that I don't really remember the months that followed, but I buried myself in school and work, and generally became a zombie of a person. The pain dulled naturally over time, until I was left with anger.

Thad and I had mutual friends, so our paths crossed occasionally. We were polite but I still housed an unhealthy amount of anger toward him. (People just mentioning his name would throw me into a rage.) I would openly flirt and throw myself at various men whenever my path crossed with Thad's . . . simply out of spite.

But then years after my sobbing-in-the-street tirade, Thad and I found ourselves—again—separated from the crowd at a party. A silence hung between us . . . but this time it was warm. Then, the unthinkable happened. Thad apologized for everything he had done. He knew what he did was wrong, he said he had learned and grown since then, and deeply regretted his actions. I accepted his apology, but asked him never to revisit the past with me again. Thad hung his head in shame and agreed. Deep down, I knew he had personal reasons to believe his behavior was normal (at the time). The fact that he broke out of the cycle made me feel hopeful. I released my anger into the warm night, and finally felt free.

Over time, Thad and I became friends. And believe it or not, I've witnessed him enjoy healthy relationships with wonderful women since. Perhaps things would have been very different if he had thrown punches at me instead of insults, but I do not carry the burden of pain I once felt. Instead, I feel a strange love for him—the man who showed me that people can change, and that sometimes "bad" is only temporary.

The beauty of human nature allows us to shift, and yes, sometimes for the better. While it's unhealthy to wait around for others to alter themselves, someone's evolution is always a possibility. This is why forgiveness is both possible and invaluable.

It may sound trite and dare-I-say anti-feminist, but I sincerely hope with all my heart that Rice can find it in himself to change. Abuse is a pattern, but it can be broken. What Rice did was obviously grossly unacceptable, but if he could find it in himself to get help and work to be a better person, it could inspire others to do the same. Not just the abusers, but the victims as well. Everyone who has ever suffered at the hands of someone else's mind or fists deserves to let go of the consuming anger before they crumble beneath the weight of their own past or worse yet, turn into an abuser themselves.

I believe we can stop this cycle. As Oscar Wilde once wrote, "every sinner has a future."