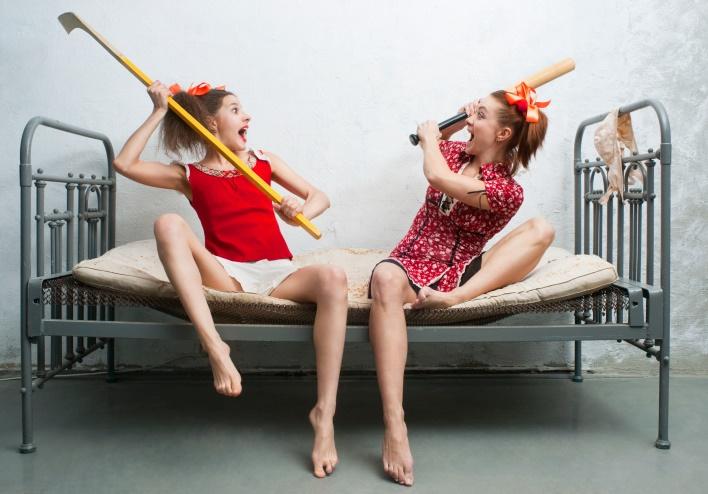 I first came across the word "misandry" on a Wikipedia article about Patty and Selma, the chain-smoking sisters of Marge Simpson. It has since been edited out. I like to imagine that this was a choice compelled by embarrassment and remorse-oh god, people might think this is real, like reverse racism. We're supposed to be an encyclopedia! I know it now as a quarantine measure, to keep something so widely loved from the crossfires of online debate.

Misandry does not actually exist to the effect that it is described—a conditioned antipathy toward an oppressing, occupying force in a society is not bigotry. Men own almost all the businesses, run almost all the government, and write almost all the death and rape threats aimed at feminist bloggers. To state outright that you distrust men is not prejudice, but practical situational awareness.

We wouldn't, we couldn't "kill all men"—even if we wanted to. Men run most of the police, military and right-wing paramilitary forces in the country. To say nothing of how unfair that would be to the admittedly large number of feminists who consider men emotionally desirous and sexual companions (don't look at me). But here we are—being told to march back up to our rooms for wanting aloud; for acknowledging the limitations our lives have put before us and wishing we had more effect in our resistance.

Alas: Misandry makes a good brand and I make a good misandrist. Most of the people I criticize in my writing are men. I've even publicly called out members of my own family for being "mansplainers"-a maddening accusation when it comes from someone who "used to be one."

I'm a transgender woman. I was assigned male at birth but live and identify as a woman. I do not feel "trapped in the wrong body"—my parents raised me as a boy and I just wasn't feeling it. I'm so brave and so, so bored of it.

Through the fedora'd gaze, mine is a tale of betrayal, an effeminate beta who dresses like a chick and rails against the logic and reason of straight white men to ingratiate myself to the women I want to accept me. It's a great story. Too bad it isn't true—that would mean, maybe, that most of the harassment and death threats I received for my transness would not come from the very cisgender feminists I work to support.

That other thing, that other charge, is harder to wade through. Not for even the smallest degree of being "more truthful" than misandry, but because it is ubiquitous and unchallenged. It is everywhere and there are no Internet darling stand-up comedians with killer bits about how it's bullshit .

The Enduring Fable Of Feminist 'Infighting'

A day does not go by where I am not accused of "infighting." For asking someone to apologize for purposely misgendering me. For voicing criticism of anti-sex worker bias. For pointing out that Tina Fey has said some racist shit. I get this every day—even when I haven't been on the Internet.

When a marginalized woman calls out a woman who has been afforded privilege through the system—when black Twitter feminists call out their erasure at the hands of white feminists or when trans women demand visibility in feminist media, including porn—she/they are summarily accused of "infighting."

It is the universal defuser, a derailing opiate of the masses. It is easy to fight back against the accusation of being a hysterical man-hater. Feminism as a whole was willed into being to resist this—well, that and ensuring the racial divide. But the charge of not fighting "the real enemy" is immediate in how it disarms the marginalized and electrifies support for the supposed injured party.

For a moment you sit there and think "shit, is she right?" You think of The Crying Game and Ace Ventura and all the times you were told, in no uncertain terms, that being a trans woman was disgusting and wrong and yet these nice straight cis feminists who you were taught as a child should be running you out of the village are letting you off lightly with a "hey, maybe now's not a good time to talk about that, we've still got a lot of men to scream at." And you are, if only for a second, inert.

What I've just described is called " internalized oppression." Many of you experience this every day. Tiny micro-aggressions that reaffirm your status as the deserving "underclass" of society, the little hair dye stain that sticks to your bathtub no matter how many times you bleach it.

This is a core component of modern feminism and it is weaponized against women of color, trans women, sex workers and disabled feminists every fucking day. And it is so hard to fight back against because you first have to fight yourself, or rather your phantom self that secretly holds those toxic values.

To fill you in: Infighting is when the Marxist and the Leninist can't decide on the wording of a mission statement and call each other dogfuckers on Twitter. Asking for respect is not infighting-my identity and your refusal to acknowledge it are not "differing viewpoints." You do not, despite what patriarchy has taught you, have a right to weigh in on my identity.

When you accuse marginalized feminists of "infighting" for holding you to a standard of solidarity, you are perpetuating the notion of a nebulous, impossible to confront oppressor. You are taking a shallow advantage of the internalized oppression you claim to resist by applying it to people who want to hold you accountable.

What a white cis feminist might fail to acknowledge when she cites a "difference of opinion" as being the cause of criticism levied against her is this: She is likely on the same side of that opinion as the men who, by her own admission, are holding us all back.

You don't see what all the fuss for respecting trans women or women of color's identities is about? Neither does Paul Elam. Nice work, First Wave.

The True Meaning Of Feminism

Feminism is only effective when it is self-critical. When marginalized voices are shut out, you create an environment where dissent is disallowed, which puts holes in our visibility and presence. Inclusion of marginalized women is not optional. With them/us, feminism remains as pockets of isolated consent, a lot of sound of fury signifying nothing. That is what actual divisiveness looks like.

That's what you want out of this, right? A united feminist front? I mean, it's not like you're propagating a cis white straight-centric feminism that immediately excises all marginalized women because you want to be the biggest fish in your pond, because you want power and status and don't feel like women should have to marry into that anymore? Right? . . . Right?

If feminism is going to progress, then we need to, collectively, confront the ways that the "infighting" argument actually arrests our progress.

And if you can't find the compassion in your heart to do so, to be welcoming of marginalized women—then do it for all the white men out there who can't blow their noses without being called out on feminist blogs. Do it for the Dan Savages, the Paul Elams, the Eron Gjonis. Show them you care (more about aligning your views with theirs when confronted with your bias toward marginalized people).