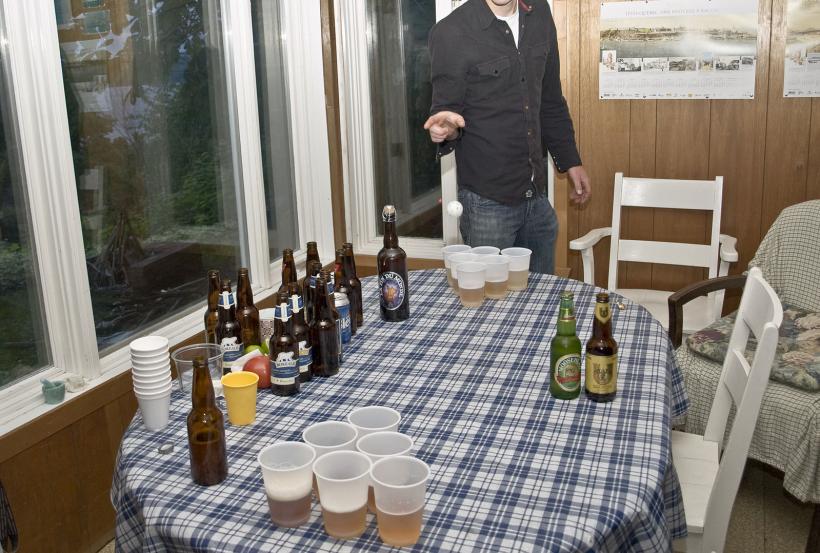 Drinking a ton makes it harder for sperm to hit their target . . . Credit: Wikipedia Commons

Former and current party girls across the nation likely read headlines in science news this week and let out a collective "ahhhhhh!" Finally: Everything makes sense.

A new study shows that men who consume more than five drinks per week have weak sperm (possibly) incapable of impregnating. Hypothetically, this gives a somewhat free-ish pass to the contraceptively lazy who like to drink. Don't let it though, obviously.

The study, conducted in Denmark and published in BMJ Open, chose 1,221 men between the ages of 18-28 to study. They recorded their typical alcohol intake and episodes of binge drinking (with binge drinking defined as consuming more than five drinks in one day, also known as "Sunday Funday"). What the researchers found was that men who enjoyed more than five drinks a week experienced a decline in the following:

As men increase their alcohol intake, the decline is greater. This makes it difficult for men who love to throw back a few cold ones on the daily to impregnate a woman. Scarier still, dudes who have more than 40 drinks a week experienced a 33% reduction in sperm concentration than those who enjoyed fewer than five (but not zero). While 40 sounds like a lot, it can break down easily. Here's just one example of alcohol-related math: 10 drinks on Saturday and 10 on Sunday (during college football and NFL-related viewings and celebrations, perhaps), and four drinks every day Monday through Friday (one with lunch, one with happy hour, and two with dinner). Yikes.

One of the researchers noticed that zero alcohol intake also had a negative effect on sperm, but this facet wasn't discussed in the study. While this may help explain the prevention of many unwanted pregnancies when contraceptives weren't used, a high level of alcohol abuse is obviously unhealthy for men, as heavy drinking increases the likelihood of many diseases and complications (depression, gout and anemia, to name a few). This also doesn't suggest that being a lush disqualifies you from needing protection. Your chances may be lower for impregnation, but that hardly means they're nonexistent—and no amount of Saturday night shenanigans are worth an unwanted pregnancy.