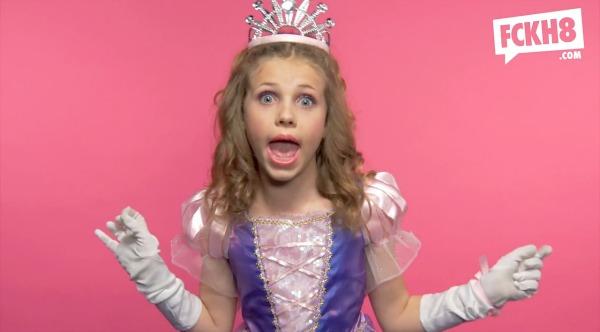 Since FCKH8 released its “Potty-Mouthed Princesses Drop F-Bombs for Feminism” video earlier this month, the video’s F-bomb-spewing little girls continue to incite criticism and controversy—much of it having nothing to do with little girls saying “fuck” (although numerous pearls have, of course, been clutched).

For the uninitiated, here it is:

As far as PSAs go the video is great. It’s entertaining, provocative, it looks good, and the princesses make some solid points. Feminism isn’t a dirty word, and pay inequality and sexual assault are infinitely more unsettling than little girls throwing around the word “fuck” . . . but this video isn’t a PSA. It’s an advertisement. FCKH8 is a for-profit company and online store that specializes in “Equality Gear,” which isn’t a secret because they spell it out on their website:

"FCKH8.com is a for-profit T-shirt company with an activist heart and a passionate social change mission: arming thousands of people with pro-LGBT equality, anti-racism and anti-sexism T-shirts that act as 'mini-billboards' for change."

FCKH8 started out with LGBT/marriage equality items (“Born This Way"/"Straight Against Hate” T-shirts) and garnered a following of celebrity allies. They now carry anti-sexism and anti-racism products “for a good cause.” But still. They're pushing products.

Regardless of the “cause”—and its inherent value or importance—FCKH8’s products-for-a-cause are produced to turn a profit, and though it’s an effective piece of viral marketing, the “Potty Mouth Princess” video is exploitative. As Anne Theriault writes:

“There is for sure nothing feminist about having girls as young as six years old discussing rape and sexual assault; I would hope that at that age, most kids have never even heard the word rape, let alone had to recite facts about it for an audience of thousands, maybe even millions . . . This is not how we empower girls. Forcing a child to ask an audience of adults if she’ll someday become a rape statistic so that your company can line its pockets with cash is definitely not the way to practice social justice.”

Unfortunately, this isn’t even the first time FCKH8 has used kids and a cause to sell clothes. Last September, FCKH8 released a video called "Hey White People" featuring a group of unnamed kids from Ferguson reciting from a script on racism that, as Aura Bogado of Colorlines writes, was:

“Clearly . . . written by adults . . . Even if the children are from Ferguson, it’s unclear if or how they’ve been compensated . . . the idea that these kids are from Ferguson is paraded for consumption . . . Five dollars from each shirt will supposedly go to unidentified ‘charities working in communities to fight racism.’ Which charities? Who knows!”

FCKH8 took the criticism they rightfully received for the video rather shittily, publishing a lengthy response that begins: "Shame on you . . . Colorlines, Race Forward & Aura Bogado. Click-baiting, Race-baiting, Homophobia, Minimizing Ferguson Residents, Trivializing Breast Cancer Awareness Efforts & Distorting Facts to Get Views & Donations" and concludes with the demand for a public apology.

FCKH8 says they’re activists at their core, but consumerism isn’t activism, especially when their “activism” profits from the racism, sexism, and homophobia they claim it’s their mission to change.

Somehow I think I can do without a “Don’t Be Hatin’ On The Homos” T-shirt.