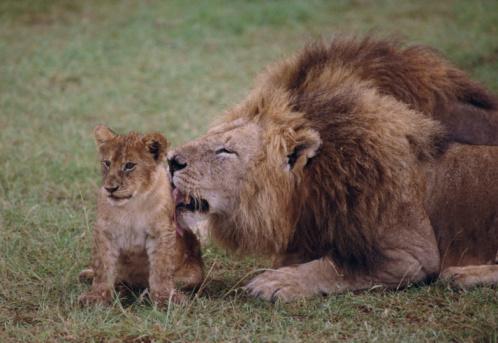 Killing babies, ie, infanticide is widely considered to be one of the most heinous acts imaginable. Need more proof beyond the visceral response you're having to mere contemplation of the act? Walk into any freshmen English Lit class and watch the students positively flip out over the satirical "A Modest Proposal" by Jonathon Swift in which he suggests both selling, killing, and eating babies.

Yet, animals have been known to do it. Why?

Apparently because nature is scary and science is cool. Researchers studied animals that practice this behavior for insight. Not only is killing babies at times totally A-OK in the wild animal kingdom, but it's done for a purpose: dominance and progeny. Take the majestic male lion, for example. Male dominance within lion communities, as with many communities, can be mutable, driving males to fight to stay on top. Thus, if a newly dominant dude lion wants to spread his seed, he'll kill a lioness' cubs if they are fathered by another lion and then impregnate the lioness to ensure his genes are passed on.

Author of the study Elise Huchard explained to New Scientist:

"Males don't manage to stay dominant for very long, so when they can mate with the females, they need to do it as quickly as possible. It's not in their interest to wait for the females to finish rearing infants, so they often will slaughter babies that aren't theirs to free up potential mates that will accept their dominance."

If you're thinking this sounds similar to the plot of The Lion King, you're totally right. Finally, Disney didn't ruin a story! Except, Scar failed to seduce Sarabi.

Interestingly, researchers also studied the effects of monogamy and promiscuity in these animalistic constructs. They speculated that both were measures to avoid infanticide. If the lioness is monogamous (hypothetically), it's less likely another male will swoop in and kill her cubs. On the opposite end, promiscuity confuses the lions. Which cubs are his? It's easy to kill the wrong ones on accident, so better to let all the kiddos live.

Interestingly, this means that the two extreme ends of the sexual partnering spectrum (monogamy and promiscuity) were both (supposedly) utilized for the same purpose. Ah, the lengths mothers go in order to protect their young.