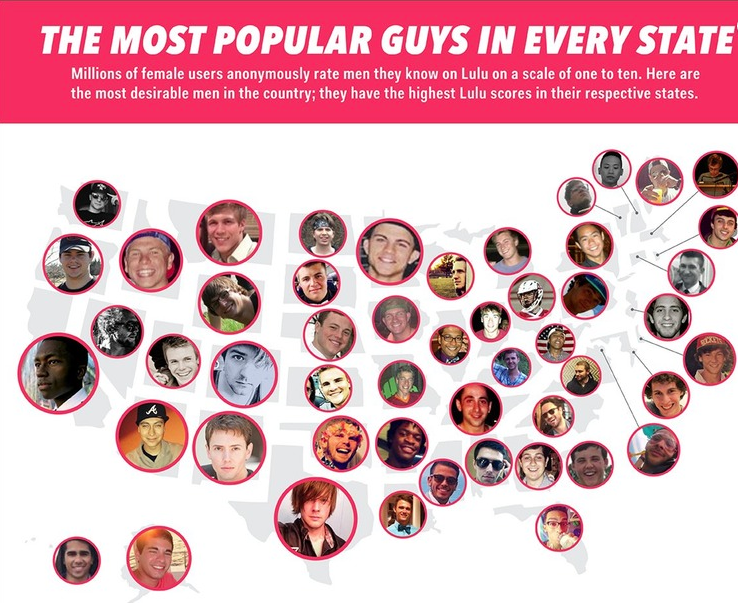 The hullabaloo surrounding LuLu—a kind of nauseating app that allows women to publically rank and judge men—had pretty much died down . . . until today.

Lulu has released their "Most Popular Men" across the nation in a giant, gross Internet list. Men rated on this app are given a numerical rating from 1 —10 based on a variety of personality and behavioral traits. When other women rate a man, his score is averaged between all the numbers. Ah, nothing says "holiday love" like reducing humans to a numeric value so Lulu decided to honor the lucky and obviously preternaturally wonderful gents who got ultra-close to the much-coveted "10." Which, as we all know, is um, perfect. These dudes are (presumably) #OneOfTheGoodOnes, since all Lulu rating commentaries are administered via pre-designed hashtags. Cheers. Kudos. Good for you guys!

But . . . what about all the guys with bad ratings you ask?

Though I'm not proud to admit it, I had Lulu on my phone. Flashing my bedazzled nails as I typed and swiped away on my pink-cased Android, I was a walking stereotype of a bitter bitch. I went into it thinking the app was silly and harmless, but honestly, it (temporarily) altered my perception of men.

I spent the majority of 2013 dating a man for whom I had actual, real, genuine feelings. I mean, like, singing "Wrecking Ball" alone in my car, crying, because "I knew in my heart we weren't a good match" type of intense feelings.  Upon splitting, I promptly switched to maneater jams and downloaded Lulu. At long last, I had a way to get back at all these terrible men! Be he my ex or a friend's, these bastards were going down. Finally!

Except, here's the thing: people, as it turns out, are kind of complex. I lavished a not-so-nice (read: awful) assessment of one guy (okay, three) almost instantly. Feeling pleased, I moved on to observe critiques of other men. Some were funny. Some were sweet. Others I thought must be well-deserved damnation. But none, however, told the full story.

Then I looked back at my cruel and rant-y ratings.

*Corey's basically said that he was a jerk and awful at sex. #JekyllAndHyde. #NoChemistry.

Want to know what really happened? Corey was less experienced than most men his age, and wildly insecure about it. He was, admittedly, harsh with my heart-shaped chest-meat, but I reciprocated with emotional venom. Because Lulu doesn't allow for any further explanations, strangers could only laugh at Corey and his supposedly misanthropic, ho-hum humping ways.

Then I noticed mean ratings bestowed upon my totally awesome—if a bit lug-headed—male friends. I was horrified! I realized that every female friend who saw my ratings were probably equally distraught to see their buddies blasted. And ultimately? I realized I actually didn't care about these past guys who "hurt me" whatsoever; instead, I was simply saddened by my recent split and had, in turn had tried to inflict that pain on others. Definitely not a good moment for me.

Like a serial-dating Grinch, my heart grew three sizes and I saw the error of my ways. Before deleting Lulu, I obsessively sought out countless men in my life and gave them good ratings. Friends, casual acquaintances, past partners, it didn't matter—I felt I had to right something. This might be the understatement of the damn the century, but relationships can bring out the best and worst in us; I've done plenty of things that make me cringe with shame.

And, let's not forget that reality is subjective y'all. Every action and word has the potential to be perceived differently by each partner. I think he's being sarcastic and mean, he thinks he's teasing me. To him, he really is joking. (For that matter, ex-men—see what I did there—have come back to apologize and correct wrongs they've committed. So while you're busy publicly lambasting him to a bunch of strangers he could be processing the best way to make amends.)

Lulu is a one-way street that's half-lit without a shoulder to pull over on. And while I'd like relationships or people to be that simple . . . it's just, not. In participating in this reductive rating system—be it positive or negative—we're actually obscure the real person we're attempting to capture.

... Alexandra Chong says she created Lulu to "unleash the value of girl and empower girls to make smarter decisions on topics ranging from relationships to beauty and health," but I just don't know how educated you're going to be using um, hashtags, as your guiding posts to a human being.  Not only is everyone wonderfully different and is attracted to different people (thank god, otherwise we'd all be brawling over some beefcake/buxom blonde in the streets) but it encourages the concept that people can actually be summarized in someone else's overly pithy words, which is troubling to say the least.

Oh, and then there's the whole hypocritical, gender-bashing, double-standard thing. As women, we fight to be recognized as equals every day; we chastise men for street harassment, objectification and culturally-embedded misogynistic thinking—yet, many of us saw Lulu as a perfectly acceptable means to express ourselves. If you don't think your whole dateable being can be reduced to ten hashtags, chances are your ex-boyfriend can't either.

Hypocrisy doesn't look good on you my dear.

I'll never know for sure if Lulu's top men are actually nice guys, but I do know that this app needs to be shutdown ASAP.