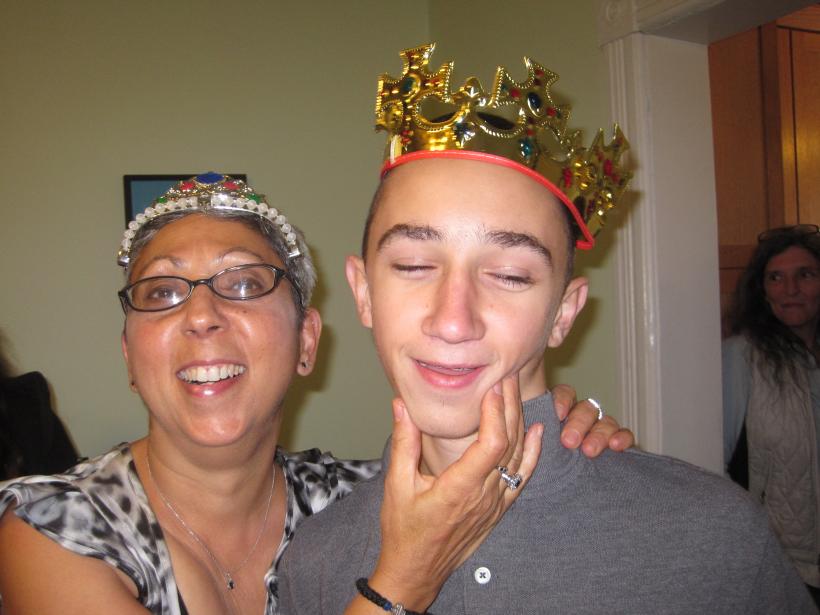 When David turned 13, he realized that they affected his behavior with girls: “I’m not the real me,” he told us. Puberty is painful enough without a prescription drug monkey on your back.

I related all too well to Tamar Shtrambrand’s “Why I Decided to Medicate My ADHD Children.” My son David had been on meds for the same condition since he was eight. Notice I said had—he’s not on them anymore. It’s not that David is suddenly cured; that pretty much doesn’t happen with ADHD. You more or less learn to manage it. But it never goes away, even as an adult.

For the past couple of years, David, now 15, had been lobbying to stop taking Concerta, a drug similar to Ritalin. Since he hit puberty, he’s been telling my husband Peter and I that he doesn’t like the way it makes him feel. Too much inside his own head: “Like I’m not me,” he explained. David thought he was more inhibited on the meds, that he wasn’t as funny while taking those little brown barrel-shaped pills.

And he was right.

To parents, this wasn’t such a bad thing. When David took Concerta, he didn’t impulsively bounce from one activity to the next like Ricochet Rabbit from the old Boomerang cartoons. David wasn’t as easily distracted from his homework: “Oh, look! There’s a butterfly!” He sat quietly in class and did the work that was expected of him. His grades the freshman year of high school, his first year in a mainstream school, since third grade, were As and Bs.

But that wasn’t David. On Concerta, he was too focused. He was intense, almost creepily so. “Who’s your favorite Star Wars character?” he’d ask in an eerie whisper. When you answered with “Princess Leia,” he’d prod like a sci-fi lech, “Why?” It just wasn’t him.

Concerta affects appetite and growth. David was twig thin, barely eating lunch, but wolfing down a big breakfast and dinner. He was always the smallest in his class and began getting self-conscious about it, shrugging off our assurances that he came from a long line of short people.

Peter and I didn’t give David his meds on the weekends or during the summer, when we noticed a big growth spurt. Come September, when school started again, there was a huge emotional tug of war as David’s pint-sized body tried to become acclimated to the surge of Concerta again. He would experience what I can only describe as a mini-breakdown.

It was heartbreaking. David was normally a happy kid; he rarely cried. But here he was, sobbing inconsolably, a weepy mess. In between tears, he’d say things like: “It’s like I have two parts of my body and both of them disagree” or “The day felt five hours longer than usual” and “I feel like crying and I don’t know why.” But I knew why. It was the meds.

Summers were blissful because David wasn’t forced into a chair at a desk in a classroom. He would climb trees, explore the woods and study bugs, learning at his own pace, with a sense of wonder. He focused enough to behave reasonably well during summer day camp. I dreaded putting him back on Concerta in the fall but I knew I had to.

The emotional deluge when his body readjusted to the Concerta back in his system was difficult and distressing. When David turned 13, he realized that they affected his behavior with girls: “I’m not the real me,” he told us. Puberty is painful enough without a prescription drug monkey on your back.

Then David confessed that for a few days in a row, he didn’t take his meds at breakfast, slipping them back into the vial when I stepped out of the kitchen for a minute. This kid never lied and felt terrible about being so sneaky and calculated, but he felt even worse about taking the pills.

For a couple of years, we discussed our options with David’s Developmental and Behavioral Pediatrics specialist. Dr. V convinced him to stick with the Concerta, that his studies were going so well, and high school would be even more of a challenge. Reluctantly, David gave in each time, looking deflated and defeated, gently bullied in a three-against-one meeting in his doctor’s office.

But this past September, David just wasn’t having it. He even resisted trying a different medication. David stood his ground and we took heed. Dr. V agreed that forcing a teenager to be on meds was a recipe for disaster. It would only harbor resentment and could lead to serious depression. Plus he would probably start not taking them anyway.

So this past September, with much trepidation, Peter and I decided to let David stop taking Concerta. The result is just what we thought: His grades tanked, he often forgets homework assignments, and concentration is a struggle . . . but he’s finally himself.

Almost every day, David “loses” his keys/phone/wallet. He’s much more of a challenge in class but luckily, he’s at a progressive public high school, with a young, dedicated staff who are willing to work with us. David’s geometry teacher, who’s also his ultimate frisbee team coach, told us, “David on the ultimate field is very different than David in geometry.” He doesn’t have to be told anything twice . . . let alone twenty times.

My family was less accepting. “I can’t force him to take drugs,” I told my sister, whose 26-year-old son has ADD.

But I’m not Nurse Ratched and this isn’t One Flew Over the Cuckoo’s Nest.

Adult friends who used to be on ADHD meds themselves applaud our decision. Ally told me that her mom used to force her to pop Ritalin every morning. “But I was miserable,” Ally recalled. “My friends used to tell me how weird I acted when I was on them. I would hide them under my tongue and spit them out when my mom wasn’t looking.”

At 15, David has mellowed a bit. He no longer climbs the walls in class. He’s better at redirecting his attention, especially when he has a “fidget” like a rubber band to toy with, but he’s still not easy. He has to work harder to get lower grades. I can only imagine how hellish it was for him to be on the meds in the first place to make this a worthwhile endeavor.

If David opts to go back on ADHD medication, that would be great, but Peter and I have decided to let the choice be his. Soon enough, he’ll be in college and will have to make his own decisions. This will be good practice for him.

In this life, you can choose what’s easy or what’s right. Sometimes the right choice takes you down the hardest road. At this point, my husband and I feel that David has made the best decision for him. And we wholeheartedly support it.

If you like this article, please share it! Your clicks keep us alive!
Tags
ADHD
ADD
medication
Concerta
mental health
hyperactivity
parenting