Sex And Eating Disorders: A Guide 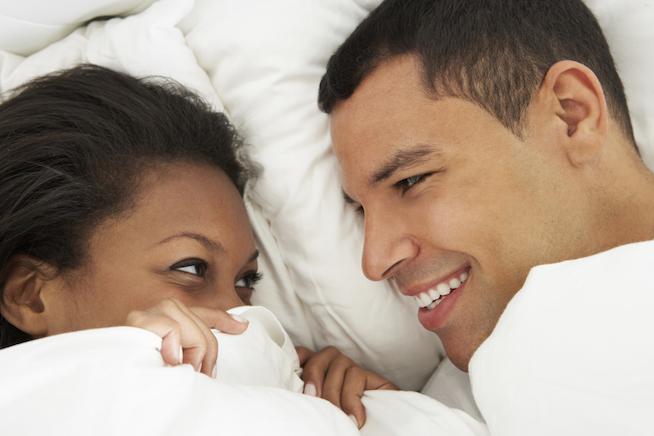 We all have bodily insecurities (and that’s OK, and it's something we can all try to work through), but folks in eating disorder recovery might have more complex histories with their bodies, and that needs to be taken into consideration.

Being the partner of someone in eating disorder recovery (I imagine, as I’m always the person in the latter category) can be rough. There’s a lot to consider — from how to compliment their bodies respectfully to how to avoid triggering them when talking about food. And if there’s one thing that complicates this delicate balance more, it’s sex.

So I asked a bunch of people in eating disorder recovery what they wish their partners knew before engaging in sex with them, and here are the five most common refrains:

1. Sometimes, My Body Stresses Me Out

This one seems pretty obvious, right? A person in eating disorder recovery most likely has a complicated relationship with their body, so it’s a good idea to tread lightly in any situation where their bodies are at the forefront of the experience — uh, like sex.

We all have bodily insecurities (and that’s OK, and it's something we can all try to work through), but folks in eating disorder recovery might have more complex histories with their bodies, and that needs to be taken into consideration.

This can be true for anyone you might have sex with, eating disorder history or not. But if you know your partner has had an eating disorder, it can be helpful to allow them the space to express these boundaries to you ahead of time.

Never be afraid to ask. And always be willing to respect their needs.

2. Sometimes Your Body Stresses Me Out

My first relationship in eating disorder recovery was with a woman who was thinner than me. I loved her dearly and don’t regret that relationship for a second, but maybe that wasn’t exactly the best thing for my recovery. I spent a lot of time comparing and contrasting, rather than just enjoying the glory of our two, separate bodies and the magic of combining them in intimacy.

But even in my current relationship with a man, I can have weird thoughts about my hips being wider than his, his clothes looking more fitted on his body than mine do on me, or needlessly subtracting my weight from his to figure out I-don’t-even-know-what.

This isn’t your fault. In fact, it has nothing to do with you whatsoever.

Sometimes, we’re just so used to thinking of our bodies in terms of comparisons that we don’t know how to shut it off. And when something about your body triggers your partner, it’s not because you did something wrong. It’s because your partner’s brain chemistry is a little off.

So when discussing bodies with your partner in eating disorder recovery, remember that theirs isn’t the only one on their mind.

Not everyone who has had an eating disorder also has an issue with perfectionism, but the two are often linked: a persistent feeling of never being “good enough” and needing to do something — anything — to feel under control is a warning sign that a person might be susceptible to an eating disorder.

Often, this is most commonly associated with anorexic symptoms or restrictive eating patterns. However, many other eating disorder diagnoses and behaviors can be associated with an insatiable need to be “more” than what we already are.

And this can spill over into other aspects of our lives, too — from the academic and professional worlds to our romantic and sexual relationships.

It might be important to your partner to simultaneously be told when they’re doing a satisfactory job and be reminded that there’s no such thing as sexual perfection.

Remind your partner that no, you’re not going to orgasm every time. Let them know when something feels particularly good, and also let them know gently when something could be done differently. If it feels like your partner is putting undue pressure on themselves — especially if they’re prioritizing your pleasure over their own in an attempt to feel like they’re “good” at something — be sure to have a chat about that with them.

And instead of telling your partner that they’re perfect (they might twist that in their mind to believe that means they can fall from grace), let them know that you love them for exactly who they are.

4. My Eating Disorder and Sexual Behaviors May Be Linked — But They Might Not Be

Research shows a loose link between eating disorders and sexual behaviors. It suggests that people with restrictive eating disorders, for example, are more averse to sexuality, whereas people who engage in bingeing are more sexually open and adventurous.

The research is old. The research isn’t well done. And the research needs to be updated (hence my dissertation — I’ll update you once I have those stats). So don’t ever assume that because you understand someone’s eating disorder history that you suddenly understand their sexual history, too — or vice versa.

As with anything else, it’s best to communicate, rather than to make (what you think are) grand connections.

It’s a common misconception that eating disorders always develop as the result of a person wanting to take control after experiencing trauma. Not all people with eating disorders engage in their behaviors because they want to take back power in a chaotic world.

But for some people, this is true. For many people, their eating disorders are coping mechanisms.

Understand both that this sometimes might be true, and also that it isn’t always.

But sometimes, in the cases where it is true, the trauma might be sexual in nature. Some people, when they experience sexual or other intimate violence, may become more susceptible to eating disorders.

So keep this in mind when being sexual with someone with an eating disorder. They might experience flashbacks. They might be triggered by certain kinds of touch. They may not want to talk about their past, but you should still always give them the space to.

Besides, eating disorders themselves can cause both spiritual and physical trauma, so being trauma-aware in a relationship with someone in eating disorder recovery will always be helpful.

And part of being a compassionate person is allowing space for your partner to talk to you about their needs, ask for help when they need it, and hold them — physically or emotionally — when their triggers creep up.

If you like this article, please share it! Your clicks keep us alive!
Tags
Sex
eating disorder
ED recovery
Relationships