A Grown-A** Woman Reads Harry Potter: Everyone You Love Will Eventually Die 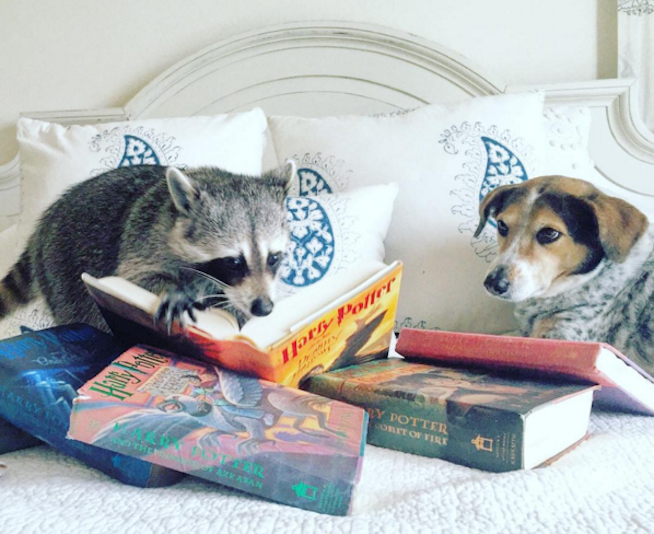 Image courtesy of Pumpkin the Raccoon. Thanks for the spoiler, Pumpkin. >:(

As much as I feel like the only person in the world this has happened to, everyone will lose someone eventually.

Let me tell you a story. Ahem.

One day, one ordinary day, Jody was chatting in Slack with her colleagues at another gig. As is typical for the afternoon, talk of posts and stats drifted into talk of animals, from the humble dog to the oddball ferret.

And then… then, this happened:

“So sad to see another one of our favorites go! 'Albus Severus Potter, you were named after two headmasters of Hogwarts. One of them was a Slytherin and he was the bravest man I've ever known.'”

In that very moment, Jody’s head spun and her heart sank. All her hard work spoiled by a raccoon with an Instagram account.

Allow me to repeat that:

Why don’t I just lie down and die.

A few weeks ago, I was lying on the floor in the living room with Boyfriend, talking about my impending 30th birthday. I want to have a Potter-themed party (but with adult beverages) to bring this project to a close. This led into my usual “I wanna go to Hogwarts” routine, which happens every couple of weeks.

“But,” I started, suddenly realizing something. “Being a wizard doesn’t fix everything.”

Harry’s parents were still murdered. Corrupt wizards still make power grabs. And holy hell, there is rampant racism at Hogwarts... and at the Ministry.

Teachers will straight-up mock students for their lineage, not to mention verbally abuse them in ways that would get them fired in Muggle U.S.A.

Even if you are a wizard, you are still a human — secret powers don’t protect you from the inevitability of evil and death. This, I’ve realized, is the real theme of the series.

I’m almost done with Order of the Phoenix, and, in light of the massive spoiler I was dealt by a damn raccoon, it’s becoming increasingly apparent to me that everybody in these books dies. Like, everybody.

Why am I even reading these stupid things if everyone I have ever become even remotely attached to is going to die? (Please don’t tell me the Malfoys survive).

Everyone told me the story would get really dark, and Order of the Phoenix seems to be the tipping point of that darkness. Forget a cute story of wizard wonderment, the real moral of Harry Potter is that life is an endless parade of pain and turmoil where you have to watch everyone you’ve ever loved die.

Which is kind of true. One of the things I realized after my mom died was that my situation wasn't unique — in fact, it’s the only thing that’s certain about human existence. As much as I feel like the only person in the world this has happened to, everyone will lose someone eventually. I just went through it earlier than most, and in a particularly ugly and ungainly fashion.

And yet, we press on.

One bright spot in this book is that Firenze is back! In case you don’t remember, Firenze and friends were my favorite characters back in entry one. He speaks to me the most out of everyone I’ve met so far — something about his ability to explain the most complicated aspects of the universe in a way that makes you realize you already understood it (he’s a Ravenclaw for sure) has made him really important to me.

Which is why I find it really weird that I hadn’t heard of him until right now — I knew the names of a lot of supporting characters before reading these books, but I’d never once heard about the centaurs. I can’t imagine I’m the only one upon whom he has made an impression.

I still want to go to Hogwarts. But ever since I got the inkling that this might actually be more than a stupid blogging stunt and that holy shit, these frivolous kids' books might actually mean something to me, I’ve been so eager for this series to to fix me, to make me feel better about my mom’s death and my own mortality.

But even if I had been a wizard, my mom would have still gotten sick, and she still would have died. I’d still be mentally ill. I’d still (as I do to this day) worry that she’d feel guilty and responsible for my depression; I'd still also feel like I’ve let her down.

Hogwarts doesn’t hold all the answers. The universe doesn’t, either. Maybe I shouldn’t even be looking for answers. Maybe there aren’t any to find, in Harry Potter or anywhere else.

And somehow... that does make me feel better.

Currently Reading: Harry Potter and the Order of the Phoenix

Least Favorite Character: Now that I got my wish and I know more about her, I’m officially over Cho Chang. I have been sitting here for ten minutes trying to figure out exactly why I don’t like her, but I guess I am just surprised she is so… jealous.

I feel weird saying that, but because she’s an athlete, I guess I was expecting her to have kind of a tough-chick vibe. But… she’s still a teenager. We all had hair-trigger emotions then. I guess, in that way, I am also surprised to learn that she is a normal human.

And now I feel awful for making assumptions about her. I’m a jerk. I changed my mind. Let’s be friends again, Cho.

Biggest Concern: The animals that are vanished by spells — where do they end up going? Are they just routinely killing animals at Hogwarts? This is very troubling to me.

Best Internet Joke I Am In On Now: Have y’all seen The Setup Wizard?

Quote: “Lie back upon the floor,” said Firenze in his calm voice, “and observe the heavens. Here is written, for those who can see, the fortune of our races.”

If you like this article, please share it! Your clicks keep us alive!
Tags
Harry Potter
JK Rowling
death
Order of the Phoenix
Firenze
Cho Chang
AGAWRHP