The Art Of Married Sexting 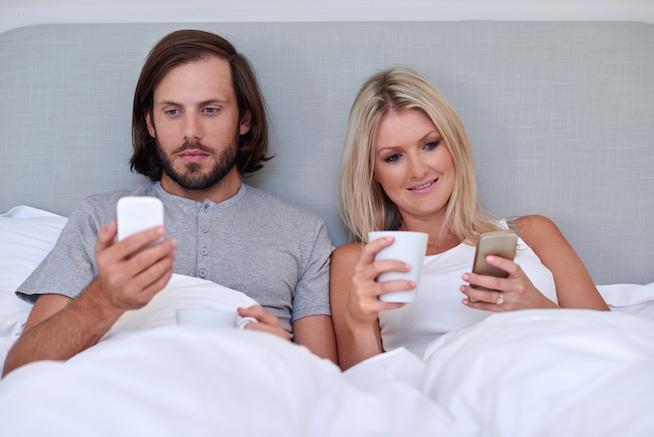 I just read Sarah Khan’s great piece on sexting and I laughed and laughed. Then maybe I cried a little. Sarah talks about all the fun of sexting when you’re single (and an adult and consenting and so is your partner) and she talks about the importance of trust and ground rules and listening to your gut. It’s all really, really good advice.

And it bears no resemblance to my married sexting life. At. All.

Don’t get me wrong. I like sending steamy little messages to my husband as much as the next girl. But once you’ve been with a person for a decade or so and they’ve been present for events like a baby being removed from your body, well... it’s just different. Not better. Not worse. Not less sexy. Just…different.

If your marriage is anything like mine, your text history with your spouse is a mixture of topics, often several at once. It’s not unheard of for me and my husband to be flirting in one text and talking about what time our son’s soccer game is in the next — and those texts minute be sent seconds apart. It’s not as romantic as an extended flirty chat but it’s also comfortable and secure because we know each other so well and trust each other completely. Responding to a “Hey baby” type text with, “LOL. Maybe later. Driving now,” isn’t a rejection. It’s life and we both know it.

Then there are the potential pitfalls of sexting with your spouse because you’re so used to getting texts that you open them anywhere and HELLO! Suddenly you’re reading something really suggestive during a conference call and you get flustered and miss something important.

With all of that in mind, here are a few ground rules for married sexting:

Rule One: Be very careful who you’re actually send sexts to. Your kid’s soccer coach doesn’t need to know about your pretty new bra.

Rule Two: Don’t send sexts to you spouse if you know they’re in a meeting with their boss.

Rule Four: It’s totally permissible to use sexts to get your spouse's attention before asking them to pick up milk.

Rule Six: Asking, "Did you use my lube instead of shave gel this morning?" does not count as a sext.

Rule Seven: Don't ask, "What are you wearing?" unless you’re prepared to read, "Rubber fucking gloves because your kid pooped in the tub again!”.

Rule Eight: Seriously, check who you’re sexting. You texted that mom from the PTA earlier and her number is at the top of the queue. You don’t want to proposition her by mistake!

Rule Nine: “Don’t cook. I’m picking up wine and Chinese food on my way home,” totally counts as a sext.

* I conducted a highly scientific survey of four of my friends on the question of dick pics. Two didn’t respond. One straight married mother of four said, “No thanks." One gay male newlywed said, “I always love it!” So, there is not unanimity on the issue.

If you like this article, please share it! Your clicks keep us alive!
Tags
sexting
marriage
texting