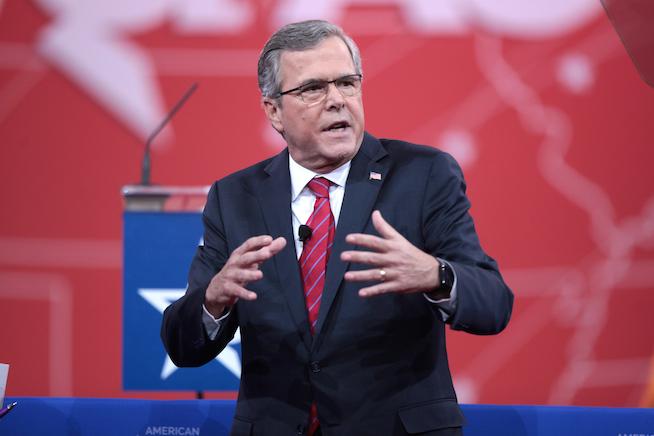 Bush might be heartened to know that I was desperately ashamed to be pregnant at 18. As a college student, I was expected to get good grades, not get pregnant. My world turned upside down the second I saw two pink lines appear on that small plastic test.

In 1995, Jeb Bush wrote that single parenthood was on the rise because society simply doesn't attach enough "stigma" to parenting. And while I was willing to assume that he had come to his senses in the past 10 years, Bush confirmed this week that he still stands by those statements.

The problem, Bush said, is that families and friends simply haven't "ridiculed" single parents enough to deter others from following in their footsteps. Lacking a steady diet of humiliation and shame, more women have made the "irresponsible" choice to become unwed mothers.

Of course, out-of-wedlock births are actually down 7% since 2000, and the CDC also reports that each year more babies are born to two-parent households outside of marriage. While families may be rejecting marriage, they aren't necessarily parenting solo.

But, even if they are single-parenting, whether by circumstance or by choice, Bush is wrong to claim that single parents deserve humiliation and shame. Shame, contrary to what Bush seems to believe, is not a family value.

When I was 18 years old, I got pregnant while on the pill. I briefly considered both abortion and adoption, but I knew that neither option was right for me. I was confused and terrified, but I knew that I wanted to mother my child.

Bush might be heartened to know that I was desperately ashamed to be pregnant at 18. As a college student, I was expected to get good grades, not get pregnant. My world turned upside down the second I saw two pink lines appear on that small plastic test.

Although I had a boyfriend at the time, we had no plans to get serious. But, as soon as I got pregnant, my boyfriend proposed. I said no for weeks, but he kept proposing, and eventually I agreed.

The thing about shame is that it encourages action, but the decisions born of shame are rarely healthy. Because I was so humiliated by the idea of becoming an unwed teenage mother, I agreed to marry a man I didn't love and who I knew didn't love me. The marriage, I thought, somehow made my situation "better."

As my pregnancy progressed and I began to show, I would walk through stores and notice people looking at me. I always made sure that my left hand was in full view. I wanted everyone to know that I might have been young, but I was married, too.

Not surprisingly, our marriage of necessity didn't last. I ended up the single parent I had feared becoming only a few years later. Instead of wrestling with single motherhood with one child, by then I had infant twins and a two-year-old. Life was much, much harder than I could have imagined.

My story doesn't end with that hardship, though. My oldest child will turn 18 himself in a few months, and I have long since adjusted to solo parenting. I grew up alongside my children, and I found my way to everything from a career to personal fulfillment.

Along the way, however, it was never shame that propelled me forward in a positive direction. Shame pressured me to "fit in" and structure my life around the pursuit of the American Dream. Shame made me work 100-hour weeks to prove that I was just as devoted to my career as my co-workers without children. Shame led me to marry more men I didn't love to try to create a nuclear family for myself and my children. Shame is a dirty bitch whom I fought for many years before finally gathering the courage to throw her out on her ass.

What actually helped me grow as a mother and an individual was love. Both love for my children and, even more importantly, love for myself. It was learning to acknowledge and accept my mistakes with compassion that freed me from destructive cycles, and it was loving myself with radical ferocity that allowed me to discover my own ideas, feelings, and dreams.

Being a single parent has never been the "problem" in my life. The problem, if there was one, was my own fear that I needed someone else to make my family complete. It was my inability to see my family as whole that led us to heartbreak along the way. It was love, not shame, that finally allowed me to recognize that I was enough for my children — flaws, imperfections, single parenthood and all.

Contrary to what Bush argues, there is nothing wrong with parenting alone. Instead of feeling ashamed of my teenage pregnancy and marrying men who were were toxic and abusive simply to obtain a veneer of normalcy, what I needed was love and acceptance of myself and my family structure. From the moment my son was conceived, it was too late for me to avoid becoming a single parent, and no amount of stigma or ridicule could have changed that. But what could have changed my life, and my son's life, was the acknowledgment that our little family was still a family, no more or less valuable than anyone else's.

Not all single parents are teenagers, of course, and many become so by choice. I had my youngest children very much by choice in my early 30s, and I haven't suffered by raising my children alone — and neither have they. However, the reality is that income inequality hits single parent families hardest. It is poverty, not single parenting, that weakens families. Rather than shaming these parents simply for being poor, we should instead recognize the importance of implementing comprehensive social programs such as affordable healthcare, paid parental leave, access to quality education and affordable childcare, and elimination of the gender wage gap. It is a lack of appropriate social programs, not shame, that threatens many single parent households.

Those are the family values that matter.

If you like this article, please share it! Your clicks keep us alive!
Tags
Politics
Jeb Bush
parenting
single motherhood
single parent