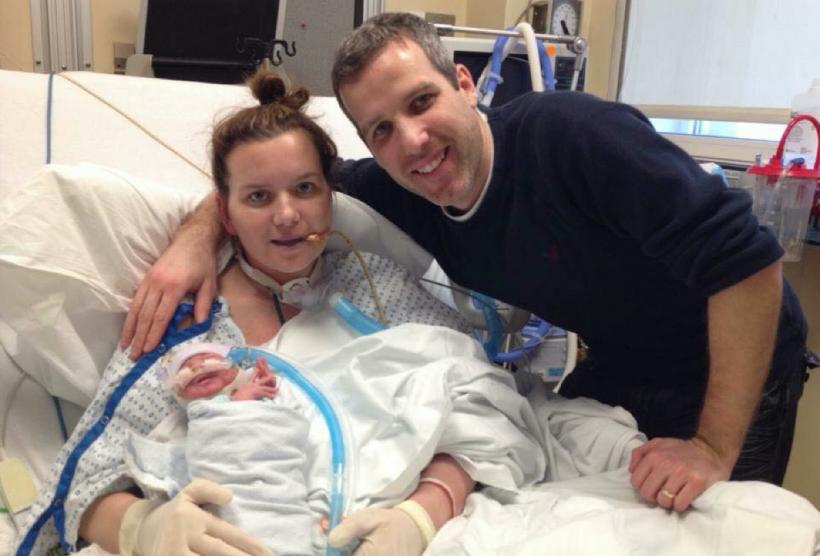 A simple flu shot would have changed everything. Image: Melissa Barvels.

I didn’t think [a flu shot] was necessary at the time, and I certainly never knew how sick you could actually get from the flu.

Imagine waking up one day to find out that you’ve been asleep for 45 days straight. You’ve had four surgeries, are in a completely different hospital than the one you walked into, and your baby — who you last remember being 25 weeks pregnant with — is now a month old.

Imagine learning all of this, and you can’t walk, talk, or even wipe your own ass.

I know what you’re thinking: It sounds like the plot line to a bad afternoon soap; but two years ago, it was my reality. It was my life.

On December 20, 2013, I was 25 weeks pregnant when I suddenly became gravely ill. I could barely get out of bed, was running a high fever, and was chilled to the bone — no amount of blankets could warm me. At first, I called my OB, and was told by the nurse practitioner to stay put and just “sweat it out.” But a few days later, I was still feeling like death; and had lost 6 lbs. This time, my OB told me to get to a hospital as soon as possible.

So I went to my local hospital in Staten Island, New York, where I was admitted and told I had pneumonia. I can still remember saying how badly I just wanted to be home by Christmas, to spend the holiday with my husband Scott and my then 5-year-old son Christopher. But three days later, I was still hospitalized, with no chance of leaving any time soon.

My last memory was of texting Scott from my hospital bed on December 23, 2013. “Did they call you?” I wrote.

But that’s where my memory ends.

Then they asked if I knew that the baby was born, and I said yes — although I honestly have no idea how I knew it, or for how long. I just knew.

My son Scotty, I came to learn, was born at 28 weeks, delivered via C-section on January 8, 2014. It happened a little over two weeks after I’d been intubated and placed in a medically-induced coma. He weighed only 2 lbs., 10 oz.

Scotty was named after his firefighter dad, though to be honest, we didn’t settle upon his name as most parents do, after hours of pouring through baby name books, and finally picking a favorite. We had briefly talked about it before I got sick, but there were still other options we were considering. When it came down to putting a name on the birth certificate, though, my husband was left to make that decision on his own.

Still, after all that we went through — and everything my husband endured — “Scotty” wound up to be the most fitting.

That memory is still so strong: A huge team of doctors, nurses, and spectators that had cared for us for two months wheeled in the incubator, and there was this tiny little human inside, just barely 4 lbs. I could hardly move, but they placed him in my arms.

During those 45 days, my husband spent every day between my hospital and Scotty’s hospital across the street. He even kept a daily log of everything that happened to me, both good and bad. This later helped me understand just how close I was to death. (Though even now, the one thing I wish I had from that time is a photo of myself — I still have a hard time grasping just how sick I was.) And he wouldn’t let anyone hold Scotty until I woke up, either: He wanted me to be the first. And so, a few hours after I woke, the doctors arranged to have me meet Scotty for the very first time.

That memory is still so strong: A huge team of doctors, nurses, and spectators that had cared for us for two months wheeled in the incubator, and there was this tiny little human inside, just barely 4 lbs. I could hardly move, but they placed him in my arms.

I wish I could say that in that moment, I felt nothing but pure joy. But I was honestly overwhelmed by so many emotions, all at once.

Everyone around us was so happy; I just wanted this nightmare to end.

And as the days went on, I began to learn more about what that nightmare truly entailed.

Back in December, I was told, the pneumonia developed into acute respiratory distress syndrome, which is usually a death sentence. But on Christmas Eve, the hospital told my husband that they had done everything they could for me, and my only chance of survival would be to transfer me to New York Presbyterian’s Columbia Hospital and place me on a little-known machine called the ECMO (Extracorporeal Membrane Oxygenation). The ECMO, I later learned, acts as an artificial lung, giving the real ones a chance to heal; and it is quite honestly what saved my life.

Once I was at New York Presbyterian, doctors discovered the real cause of my illness: I had contracted the H1N1 swine flu.

Although pregnant woman are generally encouraged to get a flu shot, I never did. I didn’t think it was necessary at the time, and I certainly never knew how sick you could actually get from the flu. That might have been the toughest part about coming to terms with all of this: A simple flu shot would have changed everything. It would have saved my family and I a lot of heartache; it would have prevented me and my son from facing life-changing health effects; and it would have granted me all of the stolen memories from that time that I now can’t get back.

But I try instead to focus on what matters: The doctors did an amazing job keeping Scotty and me alive, and today, he’s a healthy, rambunctious toddler.

As for me, I am almost back to normal, after two years. Or at least, a new normal. My necklace of scars from where I was intubated serves a constant reminder of what I went through, every time I look in the mirror; and I still have some physical issues that I deal with on a daily basis.

Those 45 days that I missed continue to haunt me, and I find myself talking about them often — despite only knowing most of my story after hearing it retold by family.

The truth is, I have my good days and my bad days; but most of all, I’m just so thankful to be alive and have my little miracle, Scotty. And I’m happy to say, 2016 brought us another little miracle: A baby girl named Madison, born May 25.

This time around, my pregnancy was filled with both joy and, understandably, worry. Every milestone I hit with Madison but missed with Scotty was a scary reminder of what I went through, and just how much time I missed. But in the end, I was blessed with a healthy pregnancy, and of course, was sure to get the flu shot this time. In fact, I now feel it’s my duty to advocate for the flu shot and the usage of ECMO, a machine that sadly exists in only a few hospitals throughout the country.

What I can say for certain is that I feel so blessed to be alive each and every day, and to be able to share my story with others.

If I can convince just one woman out there of how important it is to get the flu shot while pregnant — and save even just one family from enduring the heartache that mine did — then maybe there was a reason for this after all.

“I Didn’t Get a Flu Shot While I Was Pregnant— and Wound Up Giving Birth in a Coma” by Melissa Barvels originally appeared on Babble.com and was reprinted with permission.