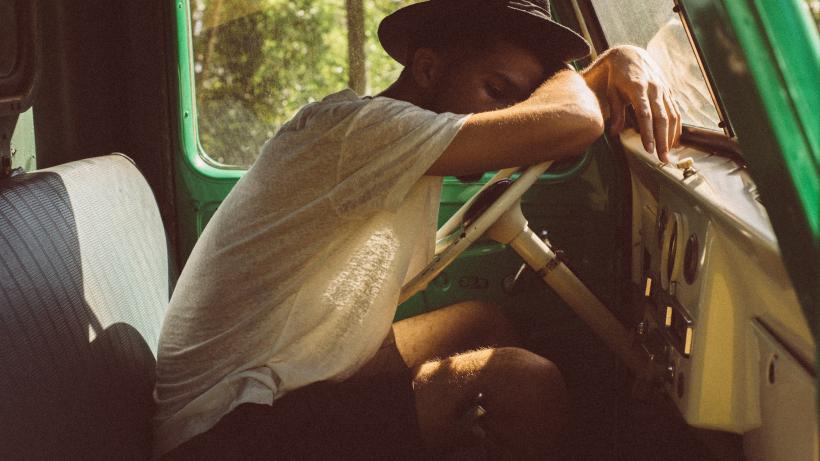 I have a hard time believing that men can be victims of domestic violence, and I know that my stepfather Joe is at the root of my problem. Image: Lechon Kirb/Unsplash.

I’ve come to the conclusion that maybe it’s not that I can’t see men as victims — maybe it’s that I don’t want to see my stepdad as having been one himself, before he was an abuser.

These were the muffled screams I heard the night I called the police on my neighbor.

In less than 10 minutes, a gang of six officers were huddled at her door, demanding to be let in. As I watched, through my peephole, I waited for the moment they’d pull her, swollen and bloody into the hallway.

But that never happened.

It wasn’t my neighbor who was bleeding and in need of protection — it was her boyfriend.

Before they cuffed my neighbor and sealed her up in the blinking cop car outside our building, one of the female officers pulled the boyfriend out into the hallway. I held my breath as I balanced on my toes, and pressed my ear against the door.

I couldn’t make out what the cop was saying to him, but through the peephole, I could see that he was slumped against the wall. His right hand was pressed into the side of his face, his head drooped towards the floor.

I tried to feel bad for him, but all I could think was, I called the cops for this pathetic fool?

I knew it wasn’t the response I was supposed to have, but in my gut, I felt no sympathy for him.

Although I hesitate to admit it, I have a hard time believing that men can be victims of domestic violence, and I know that my stepfather Joe is at the root of my problem.

“When I see your mother, this is what I’m going to do to her,” Joe said, as he jerked a double-blade meat-carving knife in my face.

We were sitting in the car; I was across from him in the passenger seat. I remember my feet dangling way above the floor mat below me. With my hand squeezing the doorknob, I knew if I wanted to make a run for it, I was going to have to pull myself to the edge of my seat.

But it was too risky for me to move, and that knife was too close to my face.

Earlier that night, after Joe had landed his first drunken punch, my mom took off out the front door in her nightgown and ran with her newly busted and bleeding lips down the street to my Nanny’s house.

She never made it there. Joe and I caught up to her in the car.

Given how little I know about his background and family, is it possible that Joe wasn’t born violent, but instead learned to be that way?

When he stopped and pulled up to the curb, my mom unhesitatingly crawled into the back seat, defeated and bruised.

Joe didn’t use the knife on my mom that night. Instead, he pinned her down on the living room floor and wrapped his hands around her neck so tight that it made her eyes bulge out of their sockets. The beatings Joe regularly gave my mom were brutal, bloody, and void of mercy.

Even when she tried to fight back, my mom was always overwhelmed by Joe’s power and strength. And so was I.

Beyond the alcoholism and his hair-trigger violent streak, I only ever knew the most basic things about Joe: He preferred scrapple over bacon; he wrote in all caps; he had two brothers; his dad, nicknamed “Smokey,” lived 10 minutes away from us.

Joe’s mom died when he was young. He kept a framed picture of her on one of the end tables in our living room. Joe was profoundly protective of her for a dead woman.

One awkward glance or comment in her direction had the power to set him off.

Once, during a beating, my mom looked up at Joe and snarled, “Would you hit your mother like that?”

He paused, and for an imperceptible second, the tension in his face disappeared, his jaw released, and the strain around his eyes went soft. He looked helpless and suddenly small, like a shame-struck little boy that had just pissed himself.

But in one blink, the rage returned, his fists became anvils, and as he pounded on my mom’s face, he screamed, “Don’t you ever fuckin' talk about my mother like that, you whore!”

Despite the fact that Joe’s been dead for nearly 20 years, his face is still the first to pop into my head whenever the topic of domestic violence surfaces. No matter how hard I try to avoid projecting my experiences onto the men around me, I keep coming back to that knee-jerk reaction that men can’t be victims.

Even though I’m well aware, thanks to sites like ManTalk, The Good Men Project and Men's Advice Line that men are often ignored by society as domestic violence victims, my stubborn beliefs refuse to budge.

I’ve come to the conclusion that maybe it’s not that I can’t see men as victims — maybe it’s that I don’t want to see my stepdad as having been one himself, before he was an abuser.

Given how little I know about his background and family, is it possible that Joe wasn’t born violent, but instead learned to be that way?

Did he learn it from his dad? His brothers? Did his dad abuse his mom? Did Joe fear for his mom’s life the same way I did for mine?

Even though I’ll never know the answers to these questions, I can’t help but wonder: If I discovered evidence that, despite all of his glaring shortcomings, Joe was more than just a fist-slinging monster — would I even believe it?

And more importantly, would I be willing to accept it?

Sadly, I’m not so sure I would.