Can You Ever Get Over Your Body Being Too Much? 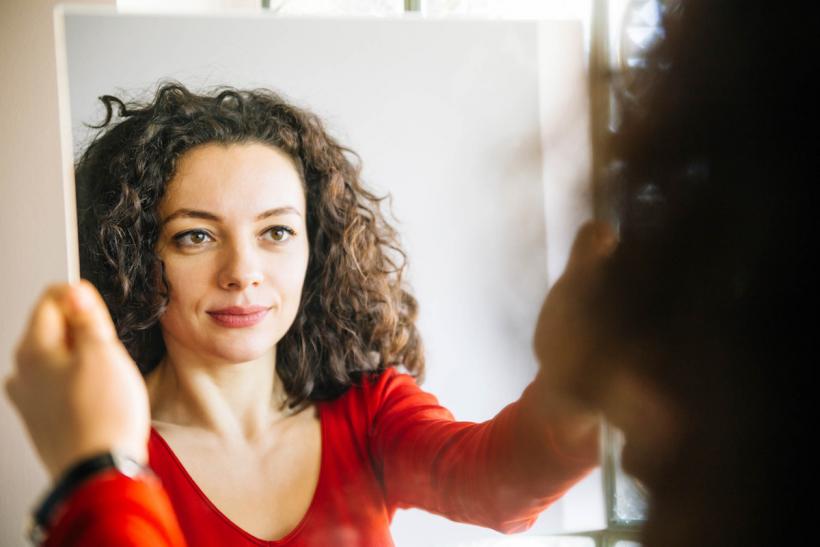 Do I want to spend the next half of my life battling a new set of reasons why my body is wrong?

I was an unusually hairy kid.

For me, it was the thick, black hair that blanketed my milky white legs that I was most embarrassed by.

But for Elaina, who was beautiful, a year older, and also my neighbor, my bushy unibrow was my most pressing hair issue. And she capitalized on every opportunity to bring attention to it.

Every morning in middle school we’d meet at the bus stop. At the time there was a rumor buzzing around that Elaina was so rich that she never had to wear the same outfit twice. I never gathered enough intel to either confirm or deny the rumor, but I did know that Elaina’s soft, chocolate spirals of permed hair that fell long past her shoulders always looked perfect.

I knew her hair well because it was what I’d focus on while she verbally picked and pruned at my unibrow.

As an insecure and unsure sixth grader, I didn’t have the balls or support to defend myself against Elaina’s jabs. The other girls at our bus stop — Patricia, Julie, and her older sister Andrea — were like me, too low on the social totem pole to tell Elaina where to stuff it.

But I knew that once the school bus came bouncing down the hill, I’d be just minutes away from escaping Elaina. She’d get on the bus first, as she always did, and disappear into the back while I and my unibrow sought refuge in a seat towards the front.

By the time I reached high school, I had an entire arsenal of tweezers, and I used them daily to tame my unibrow. And after Elaina got her license and a brand new black convertible, our run-ins at the bus stop ended but I had a new problem on my hands, and his name was Keith.

Keith was a 12th grader who sat across from me in my ninth grade math class. He leaped into the popularity stratosphere after covering a Boyz II To Men tune in our high school talent show with three other musically inclined friends. It’s not that I looked up to Keith but I was incredibly intimidated by him socially, and that’s why I never stood up for myself when he called me ugly.

You’d think after all of these years that I’d have moved beyond these unfortunate experiences from my youth and learned to accept my body as it is. But sadly for me, that hasn’t been the case, and I often wonder how many other women, who share similar experiences, can say that they’ve moved on. That when they look in the mirror, they aren’t wrestling with an old opinion or message they’ve internalized that their body is too much, too wrong, and just not right.

The first time it happened, I was wearing a jean skirt that I’d picked up from a department store in my town called Ports of the World. The skirt was stone washed, landed right above my knees, and had a vertical line of faux silver buttons that ran down the front. Keith took one look at me in that skirt and howled, “Damn girl! You are too pale to be wearing that.”

At first, I wasn’t sure if he was talking to me or not, but when I looked over at him as I slid quietly into my seat, I could see that he was looking right at my exposed legs.

“That’s just ugly. You need to slap on a tan before you put something like that on.”

Embarrassed and confused, my brain raced for a way to shield my legs from Keith’s view, but there was nowhere for me or my Casper the Friendly Ghost legs to hide.

He continued with the insults as if we were having a cordial conversation and casually trading thoughts about the weather, “Now see, if I was white I’d want to be Italian. You know, have that olive skin.”

I could feel the skin on my face start to curdle as tiny beads of nervous sweat collected behind my knees. The last thing I needed while I had Keith’s full attention was for him to see liquid fear rolling down the back of my legs.

“But damn.” Keith paused, glanced one last time at my legs and sucked his teeth. “I wouldn’t want to be as white as you though. Hell Nah!”

By the end of that year, thanks to Keith, I knew more about what made me ugly then I did about math.

I looked forward to the days that he’d be absent from class and always kept the thought in the back of my mind that he’d be graduating soon. So as Keith faded from my life so did my pale issues, but puberty soon set in.

Suddenly, seemingly overnight, my hairy, pale body started to burst and bubble over in places that I never thought possible.

And I wasn't the only one who noticed my body trading in its straight lines for curves. Mike, a kid I knew from the neighborhood long before he transferred to my high school, saw it, too. And just like Elaina with my unibrow and Keith with my ugly, pale skin, my boobs became the center of Mike’s attention.

It happened in Mr. Watson’s Latin class when I was in 11th grade. Mike and I were called to the board to conjugate a series of verbs. Always eager for the spotlight, Mike nearly leaped to the front of the room while I opted for the scenic route.

It’s not that I was shy in high school, but I was incredibly self-conscious of the size of my breasts. They were huge and impossible to contain. I spent many nights during my junior year, in my bedroom, trying to figure out a way to conceal them and the best I could come up with was the brilliant plan of mummifying my entire chest with yellow masking tape and wearing two bras over the tape on the tightest setting. Quickly I learned how painful removing tape that has been pressed into your skin for hours at a time could be. So I kept the two bras and swapped out the tape for the baggiest Hanes sweatshirts I could find. Which is exactly what I had on the day I met Mike at the chalkboard.

Maybe he it did because he was insecure. Maybe he was just a sexually frustrated teenage boy, or maybe it was because he was just an asshole with a pliant audience. But, for whatever reason, before I could even make sense of what was happening, Mike, with a stubby piece of white chalk in his hand, lifted his knee and slammed it into my chest. My boobs, given their size, responded the only way they could — by bouncing and wobbling wildly under my sweatshirt.

While the entire class erupted in laughter, I stood stunned across from Mike and the smug, satisfied look he had on his face. He waited until the roar that filled the room subsided so everyone could hear him say, “I wanted to see them jiggle.”

Over the almost 40 years that I’ve been on this planet, I’ve absorbed the message — whether it’s about my hair, pale skin, or the size of particular body parts — that I’m too much.

You’d think after all of these years that I’d have moved beyond these unfortunate experiences from my youth and learned to accept my body as it is. But sadly for me, that hasn’t been the case, and I often wonder how many other women, who share similar experiences, can say that they’ve moved on. That when they look in the mirror, they aren’t wrestling with an old opinion or message they’ve internalized that their body is too much, too wrong, and just not right.

As I get older and the skin around my eyes gets thinner, and the grooves on my forehead get deeper, I hear the message from society, loud and unavoidably clear, that my slowly aging body is wrong. Acne creams have been replaced with wrinkle creams, and baby oil has been swapped out for hyper-powered sunscreen. Today, it’s not the hair between my eyebrows that I’m worried about, but it’s the random gray ones I’ve spotted in those spaces that have my undivided attention.

Which leads me to wonder — although Elaina, Keith, and Mike are thankfully long gone from my life — if I continue to listen to the judgments that society hurls at my aging body, am I not just swapping out one judgmental group of voices for another? Or more importantly, do I want to spend the next half of my life battling a new set of reasons why my body is wrong?

Instinctively, my answer to that question is no, of course not, but given that my body continues to be my greatest source of anxiety and frustration I’m not sure how I could ever win that fight.

So maybe for me, the best place to start is by recognizing that although my body will never be model perfect right, despite what other people or society thinks, it’s not totally wrong either.

Maybe I’ll never get over my body being too much, but hopefully, I’ll learn to meet and accept it somewhere in the middle.