(Step)Fatherhood and the Blended Family 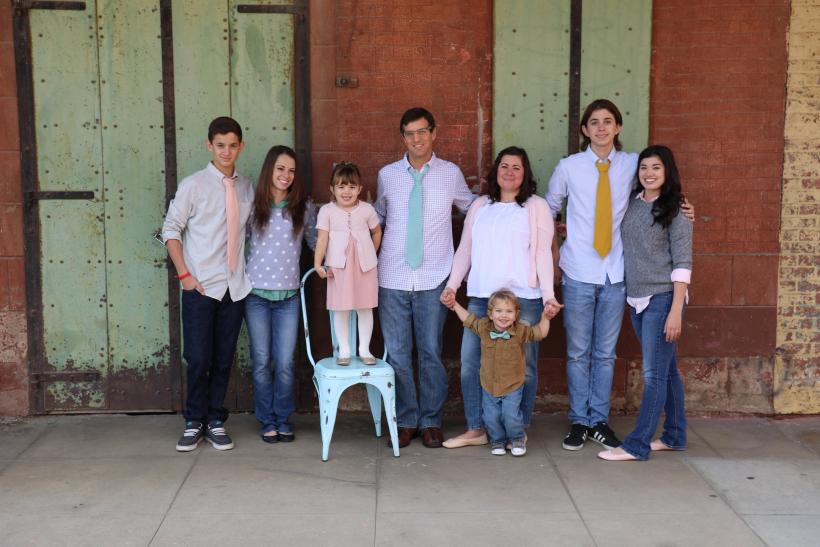 author and her family

There isn’t a mountain he wouldn’t move, not a horrifying trombone solo he wouldn’t sit through, for these kids, that aren’t his own. And the thing that is hard about that is… he isn’t their dad.

In those 23 years, I’d get married, have three babies, get divorced. I’d go to college, become a nurse, buy a car, buy a house. I’d cry a lot, laugh a lot, learn a lot. And he’d do some of those things too.

Parenthood is hard. People say that all the time, Oh parenthood is HARD. It’s the hardest thing you’ll EVER do.

People don’t lie. By the time Matt and I exchanged our (self-composed, thank you very much) vows, I had already been a parent 15 years. I’d seen first steps and first teeth, broken bones and broken hearts, pneumonia, a urologist, and everything in between.

To be fair, the cat did have some fairly significant medical issues.

When you love someone so deeply — your children, your husband, even your cat — their happiness is really sort of your happiness. And their misery? Also yours. They are woven together in a tapestry that is your whole world. Those first couple of years of our relationship  were pretty miserable at times. We bought a house. I quit my job. And because we didn’t have enough going on, we had another baby, and then another baby. There was a lot of joy. There was also something that wasn’t joy-like at all.

If parenting is hard, step-parenting is water torture (Step-parenting a cat is significantly easier by the way). I imagine it’s hard to love someone who you’ve only just met, as if they were your own child. But when he said he loved me, implicit in that was he loved them too. He does.

It was Matt who bought my son Sean his first trumpet. Matt, who paid for the lessons. It was Matt who bought my oldest daughter Kelsey a car. Matt, who built a custom bike for my son, Owen. Matt puts the roof over our head. Matt told me that I should quit working to be available for them. He’s driven to a hundred music festivals, sat through some really horrible band performances (in the early years), and still applauded and said he was proud. He pays for band camp and clothes and shoes, and all the things that come with having kids, and he never ever says, “Man, I could have gone to Hawaii with that money.” He’s been there when their own father couldn't be, worked to pay for the opportunities they wouldn’t otherwise have had.  He has lost sleep over their education, where they would go to college, how we would pay for it. And after I held them, in their fears and sorrows, he held me while I cried for them.

There isn’t a mountain he wouldn’t move, not a horrifying trombone solo he wouldn’t sit through, for these kids, that aren’t his own. And the thing that is hard about that is… he isn’t their dad. At the end of the day, he’s just Matt.  Even with six years passed, there is still tension at times. He is still Matt. There is love too, of course, but he’ll never be their dad (and wouldn't try to be). And nothing he ever does for them, will ever mean as much as the things their own father does.

Parenting is hard. Parenting the kids you only just met, the ones whose first steps you never saw, whose skinned knees you never patched, whose tears you’ve never dried, that’s a whole other thing entirely. Matt does it, he doesn’t complain, even when he doesn’t get thanked, even when he’s backset to their actual dad, even if they hate him, he loves them.

He’s a parent. Being a parent is hard.