Thank You Gloria and Madeleine, I Can Decide My Vote For Myself 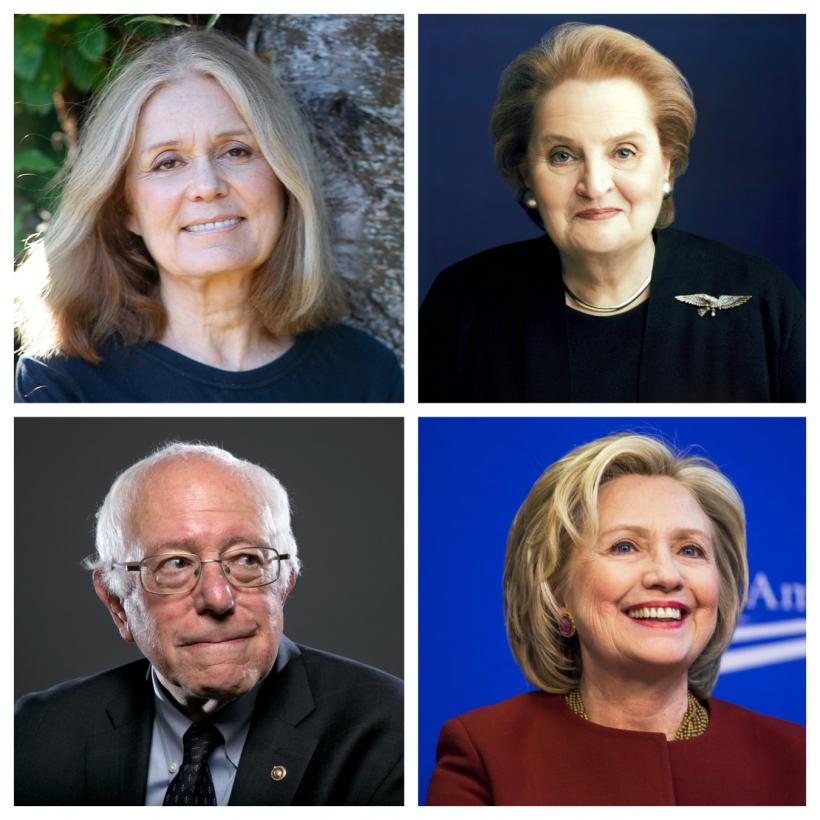 Can a feminist vote for Bernie?

I have not nor will I ever give my support to a candidate based on their gender. If that were the case, I would have supported Sarah Palin. But I didn’t.

On Saturday, February 6th, 2016, at a campaign event for presidential candidate Hillary Clinton, Former Secretary of State Madeleine Albright introduced the presidential hopeful sharing how they’ve climbed the ladder — reminding us that we’re not there, we’re not done. Speaking evenly but with feeling, she told young women that they had to help, had to vote for Hillary. “Just remember,” she said, smiling, “there’s a special place in hell for women who don’t help each other.”

The night before, Gloria Steinem appeared on the Bill Maher’s show and proclaimed that young women are backing Bernie Sanders because they are supposedly thinking, “Where are the boys? The boys are with Bernie.”

They’re there for the cute boys.

Steinem issued a retraction on Sunday morning, stating she was misunderstood (yeah, because women also can’t understand words, apparently, not that she said something completely offensive). The implications of the words of both of these feminist leaders are clear: if you’re a woman and you’re not voting for Clinton you deserve to go to a special hell, and the only reason any young woman would back a male candidate is because they’re boy-crazy.

Boom. In the name of supporting a female presidential candidate, two leading feminists shamed and dismissed women, just like the patriarchy has been doing since forever.

My friend, Lia Chiarelli, called it grandmasplaining​. Who needs mansplaining when we can have our very own advocates telling us what to think?

Thanks grandma, I couldn’t think for myself! So glad you could set me straight.

The first time I heard the term "feminist," it was spoken with such disdain that I was certain it was a frightening and threatening creature. Eventually I learned that feminists are actually female humans who want to kill all the babies and destroy families.

When I was in bible school, feminists were blamed for the crumbling of America. That, and that the gay agenda was undermining everything that had made the good ol’ USA the best country in the world.

It took a very long time, a lot of reading, and conversations with thoughtful individuals, but I gradually started thinking to myself that I was a feminist.

The worst part was that I thought I might actually be a feminist. The dirtiest “F” word I knew. A kind of evil. I thought the idea that woman be paid equally for having equal qualifications and doing equal work was actually a good idea. A woman’s place being in the home and only the home sounded like a life sentence of dusting, mopping, and cooking — none of which I’m any good at. Having a career sounded good to me and I was very attracted to the idea that I should have the say and control of my own body.

It took a very long time, a lot of reading, and conversations with thoughtful individuals, but I gradually started thinking to myself that I was a feminist. Then I started saying it in some company. It progressed to mentioning feminist ideology on social media. Finally one day I say, “I’m sort of a feminist” to a friend who looked at me and laughed. "Sort of a feminist? No, you’re a full-fledged feminist."

I tried to argue because, I explained, I’m not like those feminists.

The process was slow, admitting I was the “F” word. Now I’m confident, I’m a feminist. I don’t try to hide it or whisper it. I no longer think it is a dirty word.

I’ve learned that feminism isn’t about hating men, killing babies, wrecking the home, destroying the family, or ruining our country. In fact, now I believe that feminism can help our country, make us stronger, give us more options, support families better, fight hunger, improve education, and reduce crime.

I’m so ready, so, so, so ready to see a female in the Oval Office.

With six daughters of my own, I look at the society they are growing up in, and I am getting impatient. We’ve come so far, but we have a long way to go. If health care, education, equal pay, equal representation in government, making sexual harassment and discrimination socially unacceptable to perpetuate (but socially acceptable to call out), and maternity leave are radical, then yes, feminism is radical.

And I’m so ready, so, so, so ready to see a woman in the Oval Office.

But I’m not desperate. Having a female president isn’t so important to me that I’m going to throw my thinking to the wind and vote for the first vagina in a suit that comes along. It is insulting to have feminists suggest I do so.

I have not nor will I ever give my support to a candidate based on their gender. If that were the case, I would have supported Sarah Palin. But I didn’t.

It will be because I genuinely believe they are the best one for the job.

Feminists don't tell other feminists how to live their lives, whether or not they should have children, that they have to be working outside of the home if they do have children, how many children to have (or not have), how to dress, where to go to school, where to live…

OR HOW TO VOTE.

It's like we're getting feminism confused with patriarchy, all telling women what to do.

No, I refuse, absolutely refuse to vote for someone based on their genitalia. It is insulting to tell me that I should. I am more than that and so are all women. So is the candidate.

It's kind of disgusting that some women would attempt to shame other women for making thoughtful decisions on politics just because they don't align with the same values. Whatever happened to respecting women to make the decisions that are right for themselves?

Women I admire and have learned from, don't you dare tell me how to vote. Be a thought leader, not just another authority telling me what my politics should be, what issues I should care about, who I should support, and how I should vote. I can make that decision for myself, thank you very much.

You taught me that.

If you like this article, please share it! Your clicks keep us alive!
Tags
Gloria Steinem
Madeleine Albright
Hillary Clinton
bernie sanders
feminism