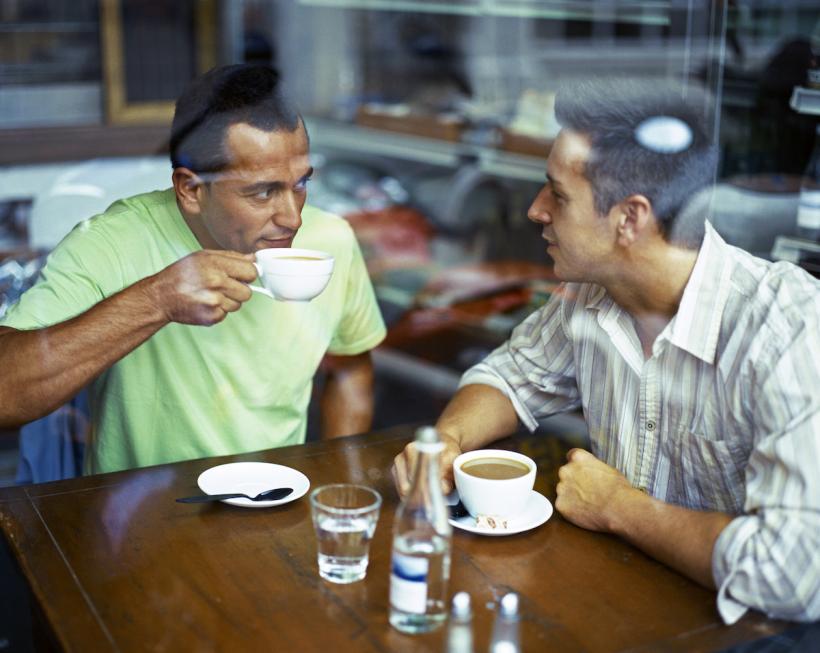 To me, the sign of a true friend is someone who can hit you with the harsh truths.

I have, of late, found myself in the interesting position of watching two friends move through challenging phases of their lives.

In quick background: one is twice divorced, and gave up a well-paying job to follow his artistic dreams. The other is a thirty-year-old virgin who seems to live for nothing more than climbing the tech-nerd ladder at his place of employment.

There are two paths a person can walk down in times of crisis or healing.

The first involves pointing fingers and laying blame on the world for all that ails you. The second is more difficult, but offers greater rewards, because you attempt to grow by looking inward and asking cutting questions: “What did I do that put me in this situation? How can I avoid it in the future?”

I have been exceedingly lucky to have discovered the second path. In my twenties I went through a horrific relationship and break up where I was cheated on and had money stolen from me. After the dust settled, I found myself asking the latter questions; “What did I learn from that? What am I going to do to avoid such pain in the future?”

The two friends in question here are approaching their personal situations with increasing differences of opinion, and each is quite passionate about their approach to life. Twice Divorced is continually looking inward, asking himself why he makes the decisions he does, and how repeated patterns created repeated failures. Tech Nerd flares with bouts of almost manic anger, lashing out and saying that everything but him is to blame for his lot in life and lack of female companionship. Tech Nerd is absolutely unwilling to use self-examination to change or grow as a person, and is to the point my wife is asking: “Why are you still friends with him?”

She had me Google the term “Toxic Friendship,” believing it accurately described my situation. I read an article about the concept and laughed; the term seemed to me a politically correct way of saying: “Your friend is an asshole."

I’ve only actively allowed one person to fall to the wayside in my life. I did so because of religion, and my friend’s deep involvement with it. I generally have no problem with religion, as long as it’s not treated like an addiction; when anything is approached casually, it’s fine.

But when every conversation starts with badgering me to adhere to the other person’s belief, something is wrong.

When for the umpteenth time “Gay people are destined for hell!” was my friend’s opening salvo, it was time to stop reaching out to him. I felt a small twinge of guilt, but at the same time, noticed that he stopped contacting me, too. Perhaps we had given up on one another.

[Side note: I did once distance myself from an entire group of friends after the horrific breakup. I didn’t want to make demands of anyone —“ It’s me, or her!” — and knew I would be healthier without them around constantly reminding me of my ex and the situation. Plus, in all honesty, I felt that if they didn’t mind hanging with someone who cheated on and used people, they weren’t the kind of “friends” I wanted in my life anyway.]

It is my, perhaps incorrect, belief that friendships can endure many trials and tribulations so long as the lines of communication remain open.

Because of this, I can think of a half-dozen situations where I can look back and realize I was the last person to reach out, and therefore be ignored. Maybe I have an overactive ego, but in those situations, it is good to have in my back pocket the knowledge I cannot be accused of apathy.

Bringing this back to Tech Nerd and my wife’s inquiry as to why I still maintained contact with him; I had been wondering the same thing she had long before she verbalized the thought.

Most of his negativity seems to stem from the fact he is single. Like anyone, companionship is desired, so for a while the Mrs. and I offered to help hook him up. This was met with the response, “You’ll fail. All my friends have tried and given up on me.” It wasn’t said in anger or with sorrow, but a laugh. This was a partially good omen; he may have been beginning from an unhelpful point of view, but at least he had a sense of humor about it.

With quickness, we discovered why his friends had considered the man a lost cause.

There is a difference between someone who knows who he is with confidence, and a curmudgeon stuck in his ways.

My friend was the latter, but unfortunately believed himself the former. We were approaching a problem from two diametrically opposed points of view. On one side: What you’ve been doing obviously hasn’t worked, so you need to make changes. You work toward your goal in order to achieve it. Plus, regardless of whether or not you have a goal in mind, self-improvement is something to strive for simply for the sake of wanting to be a better person. The contrasting point of view—his—was: I’m fine as is. Maybe if I meet someone and she proves herself worth changing for, I’ll consider it. Until then, I am who I am and that has to be accepted.

Though this attitude should have put an end to any attempts to help, several women were offered up for approval. Each and every one was dismissed with alarming finality. “This one lives too far away. That one has kids. You need to find someone that meets my criteria.”

The blinders were on, and if the woman didn’t conform to his narrow worldview, he wasn’t interested. Worse than that, instead of being even remotely grateful for the attempt, he grew increasingly bitter, saying we weren’t doing “our job” correctly, as if somehow the onus was on us to get him laid, and not merely a favor.

The breaking point in the situation involved a mutual friend, a man who expressed interest in one of the more attractive girls at our gym. As chance would have it, my wife knew this woman, and she volunteered to put feelers out and see what her dating situation was. Why? Because the mutual friend was genial and warm; he was easy-going and radiated positivity. He was, in simple terms, the kind of guy women wanted to be with. Unfortunately, when Tech Nerd found out, his pessimism increased tenfold, and combined itself with an anger that had been simmering for a while.

A litany of “Why aren’t you setting ME up with her? I’m good enough for her. It should be MY decision who to reject, not your decision who may or may not be good for me” filled both my ears and cell phone instant-message screen. The anger once focused on the world around him became aimed at me. Our conversations became continually about him being good enough for Lydia’s friend, and how I was “too limited” in my thinking to see such truth.

Somewhat irritated by this development, I turned the tables on him and began challenging his complaints. As he believed that everything but him was conspiring to keep him single, I would take his oft-repeated moments of narcissism, rudeness, or generally unacceptable social behavior and shoot straight at him: “This is why you’re single.”

To me, the sign of a true friend is someone who can hit you with the harsh truths.

Anyone can blindly agree with a person — “Yeah, whole world is against you.  Yeah, people suck. It’s not your fault, ever.” — but it takes a friend to say, “Motherfucker, you’re wrong.” My friends call me out on my shit constantly, and I think it only helps me as a person.

My actions did not go unnoticed. When a mirror is held in front of someone who would rather point fingers than assume responsibility, they’re going to lash out. With alarming quickness, I became the reason he was single. “You failed. You and your wife failed. I knew you would.” There was no longer any laughter in the statement. Even his anger and negativity somehow became my fault. Accusatory messages would arrive uninvited to my phone out of the blue at all hours of the day and night.

Which brings us back to the question: since he was constantly so off-putting and increasingly blaming me for his life problems, why was I friends with him?

As said, this thought had already run through my mind, and this is the answer I gave Lydia: One, because I can take it, and two, because I don’t care. No matter what he says, he’s saying it to me, a man with a happy home, a doggie-named-Kitty who always wags his little nub at me whenever he sees me, a beautiful, supportive wife, my first child growing in her belly… I don’t care what Tech Nerd says. If he uses me to feel better by venting and lashing out, that’s fine. I can take it; I can be his target. His words don’t hurt, because they have no value. It’s like he’s at a strip club trying to make it rain using Monopoly money; how can I be offended by that? It makes me laugh, if anything.

As it stands, I’ve already watched several people add distance to their relationship with him; one person actively said they wanted nothing more to do with his attitude and personality. It’s a classic game Tech Nerd is playing; pushing others away so he can point his finger and say, “I KNEW YOU’D LEAVE!”

I recognize the destructive cycle all too well from adolescence, when I acted that way, so I’m not going anywhere. He can continue to push at me, but I’m going to settle in like a brick wall and wait.

How this all ends remains to be seen; Twice Divorced is using self-examination to move past repeating patterns, and the Mrs. and I recently set him up with one of her more attractive co-workers. Tech Nerd continues to play the blame game, and people slowly back away.

You can only live a lie for so long.

At some point, you either to come to terms with reality, or you lose all ties to sanity. The finish line doesn’t come to you, you run to it, and the idea you will make improvements only after someone proves “worthy” is a failed path.

If what you are doing isn’t working, you make changes…

…or you remain alone.