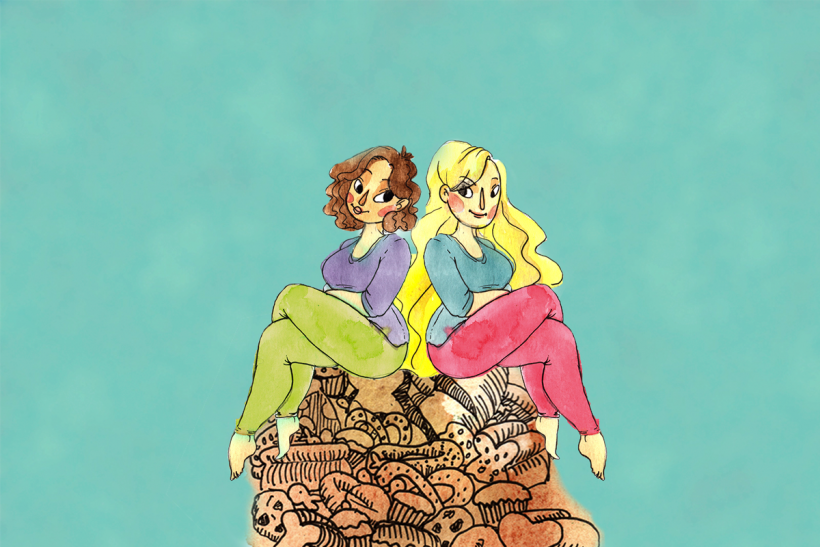 BBA 2.0 Let's Get Woo, takes the last 18 months of life changes/new experiences/self-care and adds a layer of, well, WOO.

So, I asked Joni how she would feel about doing a real life experiment. The experiment? Going wheat free.

Now, before you go all “Ugh, gluten-free is a fad, and it’s stupid,” I agree with you, 100%. For many people, it is a fad, and it is a stupid fad, at that. People treat it as a status symbol, or they eliminate it without understanding that many grains contain their own specific form of gluten, because gluten describes a protein. Corn and quinoa have their own gluten, for instance.

Too many people hop on the GF band wagon without understanding why or what they're doing, but damnit, Gwyneth Paltrow told her GOOP people to give it up, so they should, too. But for others, like me, wheat is a food that does not agree with my body. It causes serious gastrointestinal disturbances, my joints swell, and I get blinding brain fog. Eating a piece of bread makes me feel like I drank whiskey all night while repeatedly running into a wall for fun. It’s not my idea of a good time.

I am always careful when I ask people to depart from their routine, and rarely ask anyone to embark on any sort of elimination unless there is proper support, stability, and a whole lotta conversation. When there is is a history of disordered eating, I’m incredibly cautious. I’m also very clear in how I frame it: THIS IS AN EXPERIMENT. If it takes you out of your life, out of your family, out of your heart space, then it’s not the right experiment for you. Sharing a meal you love with the people you love might bring you life and restore your vitality. I don’t want to quash that.

Speaking of vitality, it’s important that changes don’t feel too hard. Whatever change you're embarking upon needs to feel doable, even if it feels challenging because I’m not a life coach. I’m not here to talk anyone into walking across hot coals in bare feet, or baby stepping people through 10 ways of overcoming compulsive procrastination or chronic over-commitment. That is not my jam. I want to help my clients succeed in resolving whatever they want to resolve, and setting a bar unreasonably high defeats their success while creating more shame and discouragement.

So, my boo, Joni, said she was up for the experiment. She suffers from lots of inflammation, because pitta. Pitta born under a fire sign is a recipe for burn out.  She has painful bone spurs (which is an excess of vata in the body that forms when pitta is allowed to burn unchecked for a long period of time). She’s also an American, and we adhere to a pretty significant inflammatory diet and lifestyle. It’s like our national treasure but not.

I wanted to see if eliminating a common inflammatory food would make a difference with her pain level. We laid some strong foundational work first, focusing on adding some supportive measures, like ghee and Nadi breathing. Having that foundation made it possible to tune in a bit more to what might happen during her wheat abstinence.

Carrie said, “How do you feel about a wheat elimination?”

I realize that’s incredibly judgemental, but I love gluten a lot.

I also love and trust Carrie, so I said I’d try.

I had some success with avoiding wheat. I bought some pretty yummy noodles that are not at all disgusting. I bought this pancake mix which is stupid delicious.

I love bread a lot, so I got this artisan bread book. I have not MADE any of the bread in this book, but somehow, just having the book available to me is like a little fluffy wheat security blanket.

Despite all I have at my disposal, I still sucked (and continue to suck) at eliminating wheat.

On the days I went without wheat, I can’t say I noticed a difference, but that’s probably because two days without a food item is not elimination. That’s just “I ate different for one day.”

The thing is, our family eats some kind of bread with every meal. Many meals include bread AND pasta. So the days I was successful with the elimination of wheat, I just didn’t eat what my family was eating, which is not terrible, but also not awesome.

While I think it’s important that my kids know that I’m trying to make adjustments to my diet without “dieting,” I also don’t want to send the message that I am miserable or depriving myself of something. When the rest of the people at the table are dunking crusty homemade French bread into the beef stew I made, and I am weeping, it definitely looks like deprivation.

This is obviously my problem. I could just eat stew without hot, fresh, and delicious bread, but I didn’t want to, so I was pouting like a child.

On spaghetti night, I made my own pasta separate from the rest of the family, which again, seems strange to a table of kids/teenagers.

In addition to trying to significantly alter my diet, I am also moving, and working full-time, and even though I don’t have a uterus, I still have PMS, so everything is making me cry.
I’m crying right now, in fact.

In addition to the epic wheat elimination fail, I have also only done yoga like three times this week and forgot my ghee at my other house (I am living bare bones in our new house in the middle of nowhere while furniture is delivered and my family is four hours away in a house with ghee and rice noodles.)

This all stressed me out so much that I went and did five minutes of Nadi breathing.

Sadly, I have to declare wheat elimination, and this entire week, a fail.

My husband likes to talk about “failing fast,” which is a Silicon Valley way of saying “screw up and then learn how to fix it quickly.” I’m not good at failing, fast or otherwise.

But I think there is an important lesson here.

The lesson is, life happens. Health is not a linear thing. Wellness is not as simple as “I don’t eat wheat” or “I do yoga every day!” Sometimes health means admitting you can’t do everything. Sometimes the healthiest thing you can do is to say you can’t do it all.

Next week: One month check in!

If you like this article, please share it! Your clicks keep us alive!
Tags
BBA
Beyond Before & After
wheat
diet
Yoga
nadi
breathing