I Dated My Co-Worker... And Now I Know Why You Shouldn't 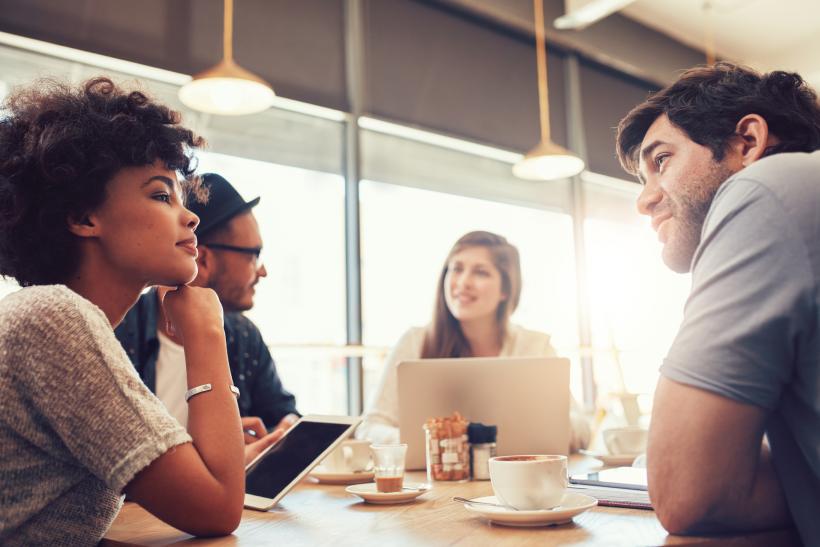 There are some people who are all for dating a co-worker; after all, we spend more time in the office than almost anywhere else.

There are some people who are all for dating a co-worker; after all, we spend more time in the office than almost anywhere else.

Then there are some who sit firmly in the “don’t shit where you eat” camp. I was fairly ambivalent about the whole workplace relationship thing, until it happened to me… Then? Well let’s just say I had pretty strong opinions on it after that.

I first realized I had a teeny tiny crush on a guy from work when I fell over outside and split my knee open. When I’d limped up the stairs, thoroughly embarrassed, he’d been the only one to leap into action when he saw the steady stream of blood flowing down my leg.

As he mopped up my injury, I thought ‘Hmm, this guy…’ But almost instantly the thought was gone. At the time we both had long-term partners, so it wasn’t really anything; just a fleeting sort of spark that barely lasted a second before I jumped back into the real world.

I didn’t think about it for five years.

By then we’d both become pretty good friends, and after we counseled each other through the particularly painful breakdowns of our respective relationships, he admitted he’d fallen in love with me. And when I thought about it, I felt pretty dumb for not realizing I’d fallen for him, too.

I was hesitant to start dating at first.

What if it didn’t work out? How would we continue to work together?

But he assured me he was sure I was “it” for him, and he’d just been too stupid to realize it all these years. So we started seeing each other. Secretly, though. We didn’t want anyone from work to know until we’d figured out exactly how serious we were.

Truth be told, we also had no idea what the HR policy was in terms of dating colleagues. But, during the Christmas party, he spontaneously jumped in on my karaoke rendition of REO Speedwagon’s I Can’t Fight This Feeling (I chose it accidentally I swear, I just really love REO Speedwagon). Our spontaneous love ballad duet kind of gave us away.

We figured we should probably formally let our boss know, and went in for a meeting. His response was that as long as it didn’t affect our work, it was okay.

And for a while it didn’t.

You Might Also Like: Ask Erin: How Do I Stay Professional After A One-Night Stand With A Co-Worker?

But then came our first mini-break as a couple. We’d been together for about five months at this point and had decided to take a little trip interstate together. We’d already had whirlwind discussions about how “right” we felt together, and how everything made sense when we realized we’d been looking for each other all along. We’d even talked about marriage and kids. It felt like it was all meant to be, and our plans for the future were full speed ahead, so the idea of a holiday away seemed perfect.

For the first few days, it was. We ate at trendy cafes, saw theatre shows, took selfies with animals at the zoo… And then we had our first fight. It was quite big, but to be honest I couldn’t even tell you what it was about. I just remember me crying, him acting cold, him lying that everything was fine when we went to introduce him to my extended family, us sleeping so far apart in our hotel bed that it felt like we were on opposite sides of the world. Then the next morning I awoke to, “I don’t want to do this anymore.”

Thinking he was talking about the fight, I said “Me either, let’s just enjoy the rest of our holiday.”

I am pretty sure people two towns over could hear my heart shatter.

The rest of the day was a blur of tears, phone calls to rebook flights to come home early, me staring catatonically into the distance at nothing. I was in shock. I didn’t understand how something that had felt so right could be over, and how he could be so cold and resolute about it after fighting so hard for me. It made no sense. One fight, and too much drama? One fight in five months? Are you fucking kidding me? He had dumped me out of nowhere.

What made even less sense was how indifferent he seemed to be after how full on it we had been. As I was crying on the plane, he actually asked me, “Hey are you okay? What’s wrong?”

“No asshole,” I wanted to scream. “I’m not okay. You broke my heart after promising to take care of it and now I am stuck on a plane with you for two fucking hours.”

But that wasn’t the only thing I was stuck with. I was stuck walking past his desk every day to get to my own. Stuck sitting in the same kitchen as him when we took lunch. Stuck running into him in the halls to get to the bathroom.

Our office was quite small so it didn’t take our co-workers long to realize we’d split.

It was humiliating, as we’d only let the cat out of the bag that we were officially an office couple just before our holiday.

I got messages from colleagues saying how sorry they were, how he never deserved me, how they thought he should thank the heavens I’d even given him the time of day in the first place. I was sprung crying in the office restroom several times over the next month. Occasionally. I welled up at my desk too, although that was usually followed by a dash to the ladies.

With all that, the very worst thing was the fact that he kept acting nothing was wrong, like I was the crazy one. My heart was breaking on a minute-by-minute basis, seeing him sitting mere feet from me every day, but he was carrying on like we were still the best of friends.

“How are you today?” his email said.

Are you fucking kidding me?

“You look good today, by the way.” he’d continue.

I couldn’t stand his indifference and total lack of empathy. Even when my face was stained with tears, he had no concept that this was his doing.  I had to stand inches from him whenever I needed to print something out, so close I could smell his cologne. Every time I felt okay again, he would email me or walk past my desk and the silent weeping would start again.

My work slipped, my output slowed down, I couldn’t even eat. Because no matter where I went, he was there. Not changing his mind about us, acting like were still buddies, trying to talk to me to alleviate his own guilt because if I responded to him, he couldn’t have been all that bad of a person. My productivity at work dropped back so much I was called into a meeting with the boss one day and told to spend some time at home and sort myself out. I was ashamed.

Luckily (unluckily?) we were all made redundant soon after that, and my daily torture was over.

But I would never, ever date someone I worked with, ever again.

The trauma of being stuck within touching distance of someone who’s ripped your heart into a million pieces for eight hours a day, five days a week, was excruciating, and I wouldn’t wish it on my worst enemy. I could have lost my job because of a breakup, not to mention putting my mental health at risk day after day.

So yes, I dated a co-worker. It’s a mistake I won’t make again. Not unless I have either a back-up job or a goddamn ring on my finger.

If you like this article, please share it! Your clicks keep us alive!
Tags
office romance
workplace
dating