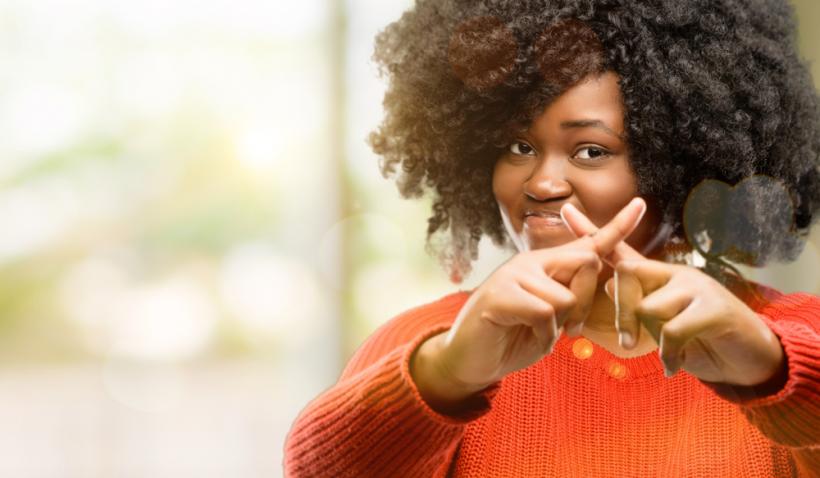 I’ll just be sitting here waiting for my weirdo.

I hear internet dating success stories all the time.

“We met online and six months later I proposed!”, “We texted for a few weeks and when we met up, I just knew.”, “I met my husband about three years ago on Tinder… He made a bad dad pun that made me laugh and I was a gonner from that moment.”…

My story never seems to quite go that way.

My online dating tale of “love” is usually something along the lines of “We had great chemistry and then he disappeared off the face of the Earth.” Or “We chatted for a few weeks and I knew from the moment I met him that he wasn’t in his 30s at all.” Or even “He said I looked kind and beautiful… and then he asked if I wanted to lick his balls." All of which are a very fucking far cry from happily ever after. So am I just really unlucky or am I doing something in my profile that’s attracting the wrong (really, really wrong) sort of guy?

I decided to use one of the most scientific methods known to womankind to find out if I just had sh*t banter on my profile or not: I asked my girlfriends.

“No not you,” she said. “I mean where do I start with what not to put in a profile in general?”

“For starters, don’t lie. You’ll attract someone totally wrong for you then wind up with having to be that fake person forever.”

My friend Julie chimed in: “And don’t put up a photo with your ex in it… No one wants to see your baggage upfront. They’ll be comparing themselves to the ex and either find themself wanting or think that you haven’t moved on.”

The list went on and on: Don’t say you’re nice, because people who have to say they’re nice usually aren’t. Don’t use filtered photos, or photos that are only selfies where you’re pulling that one “I’m sexy and fashion stole my smile” a la Victoria Beckham. Don’t post anything super personal; people have to earn that information. Don’t rant about how much dating gives you the sh*ts because no one wants to date the girl who hates dating.

Don’t use cliches like you "like to have fun” or “enjoy a good time” because they mean nothing, and ultimately don’t say anything about you.

I told them I did none of these things and offered my profile up for inspection. “Be honest,” I said. “Do you think this represents who I am as a person, and am I doing anything that looks like a big flashing sign saying ‘Please show me your penis after ten seconds of knowing me’?”

“Well,” Julie began. “The photos all look like you, no filters, and a mix of selfies and shots taken by others, that’s good. And you have a couple of you travelling and some when you’re acting, and one at a cooking class, they show your interests.”

Ava nodded. “Yeah there’s good variation of casual and made up, too.” She read over my profile. Now, because of the possibility of public ridicule, I won’t be posting my profile here, dear readers. I, however, will tell you my friends’ reactions.

“Oh that’s cute!” Ava said. “I like the whole ‘random facts about yourself’ thing you have going. It’s not boring, stock-standard crap, it’s quirky. No bitching about modern dating sucking, even though weknow you hate it. And you say what you’re looking for, which weeds out anyone who is just looking for sex unless they just want to try it on with everyone or they didn’t bother to read your profile.”

Julie piped up: “Yeah and if they don’t read or they just want sex you don’t want them anyway so they’re easy to weed out.”

So after pulling every part of my profile apart, the general consensus was that it was very “me” and that was “good." So why the f*ck do I keep going on dates with jerks?

I decided if I wanted real answers I needed to turn to a professional: my therapist who, as well as sorting out all of my baggage and issues, also happens to specialise in relationships.

“Do you think I am making mistakes in my dating profile that are attracting the wrong men?” I ask her pretty much as soon as my ass hits her couch cushion in our next session.

“Do you think you are making mistakes in your dating profile?” She posits back at me. I can see we’re going to be in for some self-reflection today.

“Well,” I start. “I have had a million bad dates with a million bad guys, and my friends seem to have two to three dates max and find someone lovely. Is there something I’ve written that’s ‘weird’, or secret code for ‘treat me like crap’?”

I pulled up my profile for her to have a look at. She takes a second or two to read it, looks through all my photos and says simply: “Is it all true?”

“And the photos definitely look like you,” she continues. “So there you go.”

Sorry, where I go?

“If this profile is genuinely representative of who you are, which it seems like it is, and someone treats you like crap, doesn’t that say more about them than it does about you?”

She continues: “If you’re being genuinely you, then you can’t really be making a ‘mistake’. If people are being dicks [yeah my shrink swears, I fucking love her] it’s because they’re dicks, not because you’re making mistakes. The aim of dating is to find someone who fits with who you are, and those men who act like idiots don’t fit with you. It’s not you, it’s them.”

So if it’s not my fault, how the hell do I find someone who isn’t a dick then?

“It’s about you knowing your own worth, and projecting that out to the world,” she says. “If you know you’re high-value, then you’ll be better at judging whether someone else is worth your time and attention. Maybe it’s not your profile that’s the problem, it’s that you’re trying so hard to impress them and write the ‘right’ thing in your profile, you forget to make sure they impress you before you back right off the bat.”

“Of course, it also has to do with luck,” she says. “Just like the real world, if you go to a shitty bar, the odds of you finding Prince Charming are reduced. Online dating can be a bit like a dive bar sometimes; some nice guys some of the time but the vast majority of patrons are awful.

“Dating is, and always has been a numbers game,” she says, “and as long as you are striving to be the best version of you, you’ll be mostly likely to attract someone who is healthy for you.”

So what she’s saying is that as long as I’m being me, I’m not going to turn the right guy off?

“Exactly. But I am also saying worry less about turning the right guy off and more about making sure the right guy turns you on. Even if your profile or online chat is ‘weird’, as long as it’s you you’ll find your weirdo.”

Don’t mind me, guys, I’ll just be sitting here waiting for my weirdo.

If you like this article, please share it! Your clicks keep us alive!
Tags
dating
online dating
how to write an okcupud dating profile
everyone lies in their dating profiles