Ask Erin: How Do I Get Over An Ex Who Dumped Me Out Of The Blue? 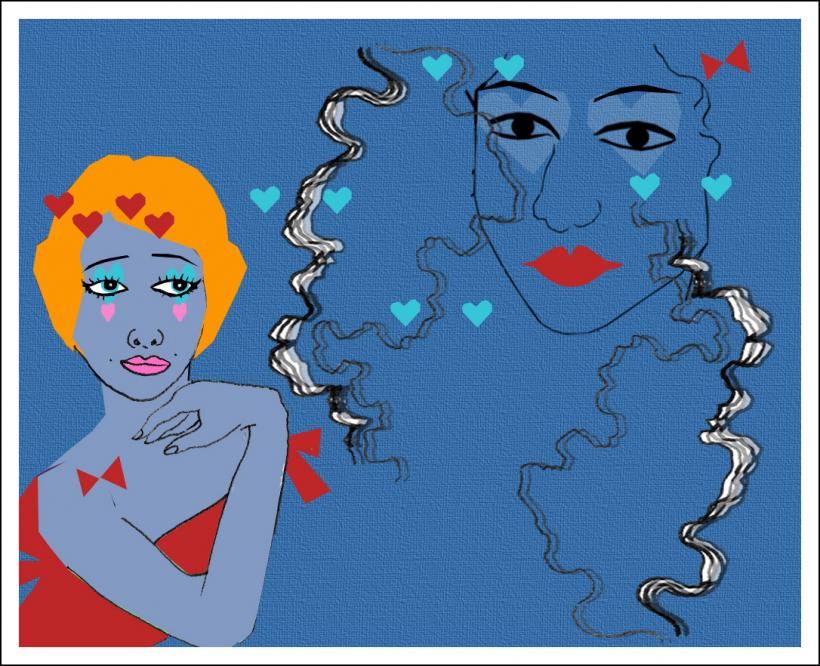 How do I get over my ex who dumped me out of the blue? (Artwork: Tess Emily Rodriguez)

I hope you will be able to offer me some constructive advice. I started dating this girl for a few months, and we instantly clicked, we are so comfortable with each other, and we both admitted that we both make each other really happy. In 26 years, I’ve had two relationships — proper ones — and this was the second, and I have never felt this way about someone.

The girl is amazing, and I think she is out of my league.

Two months into our relationship she slept with someone else. She didn’t tell me until we were deep in conversation and I asked whether I have anything to worry about. She told me she took a gram of coke and slept with this girl (who is apparently straight and just broke up with her boyfriend) in a toilet. The girl told me she wasn’t sorry at all.

I was obviously devastated but because I’m so in love and didn’t want to lose her or what we had, I forgave her within minutes of that conversation regardless of how much I cried in front of her. After that evening, things between us were a bit distant, and I tried to repair it.

After less than a week, the girl admitted what she did was wrong to me, and she was sorry I was so hurt. I didn’t expect this, and I was happy to know that I was cared about here. So things from that point seemed and were going great. We had more dates, went to one of her friend’s baby showers, and I met more of her friends, and we all got on.

Then one week, I booked us a spa day in April. An hour before we were supposed to meet I called and she told me just to go myself even though throughout the week we both had been looking forward to it.

Then she told me we needed to talk and that she didn’t want this or me anymore.

I was standing in a public place crying, begging her not to break up with me. I asked to see her, but she refused. Our phone conversation lasted about 90 minutes, and after that, I received a text saying how sorry she was for everything, and she wishes it could be different and hopes I’ll be okay. I replied saying I was shocked and I miss her and just want to fix this. She said I never did anything wrong and there’s nothing to fix.

Since the breakup, I have messaged her, and she replies. I even called once, and she texted me asking if I was okay and I took that as her caring. I recently sent her a voice note as we always did those and I basically asked her out on a date like our first date which was amazing. But she’s not replied since and I know she probably wants me to move on and I am trying, but it really is hard.

I would love to get back together. I miss having the connection we did. I just worry that someone will disrespect her and she’ll feel like I did and I don’t want that for her. She is a good person, and she deserves the best, and I wish that were me.

I would like to think months down the line we could get back together, but I don’t know. I have no doubt she’s been with a dozen people, yet I can’t even leave my house because I still feel sad about it all.

What do you think I should do?

I think about her all the time, but I am focusing on me at the moment. Thanks for your time.

First, I want you to know something very important…

You will stop feeling this way, sooner than you think.

You are so young, and you have so much living and loving ahead of you. I want you to really “listen” to a few things I’m going to lay out for you right now.

She is not out of your league; you’re out of her league.

Your ex reminds me of a young me. The young me who spent time and energy avoiding real connections, who cheated and did drugs as a means to that end, who felt so badly about myself that I sabotaged good relationships because deep down I thought I didn’t deserve them. Maybe your ex is not exactly like that, but I’d venture to guess I’m not far off.

She did you a favor by ending things.

Her behavior is messy. Doing a gram of coke and having sex in the toilet are not hallmarks of healthy behavior (even when they feel “fun” when we’re young and dumb). I am going to pose the question I always pose to those struggling to let go of toxic relationships: Is this the relationship you would wish for your best friend or sister? My bet is on “no.”

You deserve so much more than you believe.

You mentioned in your email: “I just worry that someone will disrespect her and she’ll feel like I did and I don’t want that for her. She is a good person, and she deserves the best…”

I want you to replace her with you. “I don’t want that for ME. I am a good person, and I deserve the best.” Because this is the truth. You are a loving and compassionate person. I want you to direct some of that love and compassion towards yourself. I am going to take that a step further…

To show others love and compassion, you have to set boundaries.

To that end, I highly recommend that you seek the help of a therapist. It’s so important when we come out the other side of an unhealthy relationship that we examine how we got there. And a therapist can help you do that. Email me if you need any resources or direction in finding one.

Additionally, a 12-step support group could also be beneficial. CoDa and Al-Anon have helped so many people I know with boundaries and with establishing new paths to healthy relationships. Give them a gander.

Lastly, be kind to yourself.

Lean on your friends, make the time for small acts of self-care (going for a walk, lying down and listening to a guided meditation, catching a mid-day movie, cooking at home with friends…whatever it is that speaks to you). These actions of self-care help to build self-esteem.

You will get there. And you will find love again — a healthier and happier love.

The information within Ask Erin should in no way be interpreted as medical advice because I'm not a medical professional. But I am here to help — to share with you the wisdom I've gained after years of making mistakes. If you have a question for me about relationships, addiction, dating, friendship, depression, sex, consent, what I’m reading, Sphalerite, or anything at all, use the contact form below or email me at askerin@ravishly.com. As always, your anonymity is golden. Lastly, I’m so excited to share my Ask Erin Self-Care Guide, free when you sign up for my weekly newsletter. xoxo

If you like this article, please share it! Your clicks keep us alive!
Tags
Ask Erin
break up
breaking up
heartbreak
broken heart
advice