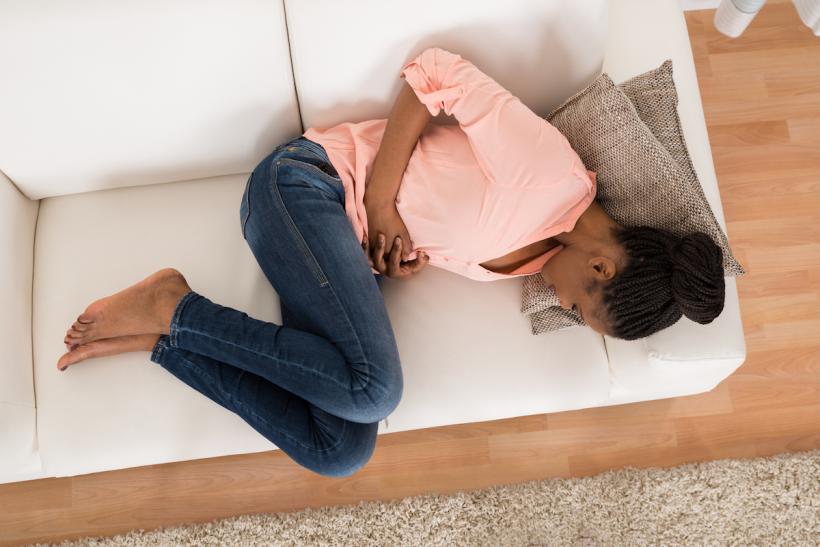 "Would I be in pain forever? Would my periods ever regulate? Will we be able to have more children? And would I be forced to have a hysterectomy like my mother?"

Painful periods run in my family. I can remember my mom telling me stories of missing school because her pain was so intense she could hardly move. My periods were painful but they'd always been regular, so I didn’t think much of it. When I asked my mom if she ever got checked out for endometriosis, she said no. I figured that could be part of my problem and made a mental note to get checked out myself.

When my mother got a hysterectomy in between my junior and senior year, I didn’t consider it as a sign I should take my reproductive health more seriously. I figured if anything was wrong, I would be informed during my routine exams. I put those concerns out of my head until years later when I had my son.

Suddenly, aches and pains had become the norm and retained placenta triggered a series of urinary and uterine issues.

When I felt a familiar pain and had a small amount of spotting nearly thirteen months after giving birth, I was ecstatic. I hadn’t had a period in nearly two years and I was more than ready to know my body was doing what it could to regulate post-baby. I waited and waited, knowing at any moment I would see the familiar red sign. But after 48 hours, the pain had multiplied and there was still no accompanying flow. I had a doctor's appointment scheduled for later that week, so I did my best to deal with the gut wrenching pain that woke me from my sleep the next two nights.

At my appointment, I was told the usual: “It’s normal for breastfeeding women not to get their periods for up to two years post baby.” But when I described the severity of the pain and the lack of blood, we decided to do an ultrasound to rule out pregnancy.  When the results for the pregnancy test came back normal, I was disappointed. Next, I asked if there was anything that could explain the extreme pain I was in. The doctor said, “It could be caused by the fibroids.” While she couldn’t tell exactly how many, my vaginal ultrasound revealed 3-5 fibroids. I didn’t know much about fibroids so I asked if they were a big deal or if they would affect my ability to get pregnant again. My doctor addressed my concerns with a non-comforting, “It depends” response.

After my appointment, I called my mother and told her about my new diagnosis. She responded by telling me fibroids run in our family and large painful fibroids were the cause of her hysterectomy. Suddenly, I remembered the images of the many masses that were removed during her hysterectomy. I hadn’t made the connection prior to this conversation, and I was devastated. After my second experience with debilitating cramps, I decided I would stop feeling sorry for myself and do some research. And I would begin with finding out what a fibroid even is.

A quick google search revealed that fibroids are noncancerous uterine growths. They can grow very large, cause extreme pain, and often lead to the removal of the uterus, like they did in my mother's case. While the exact risk factors are unknown, being African American and having a family history of fibroids are at the top of the list. A wide estimate expects 20-80 percent of women will get fibroids by age 50, but for African American women rates are much higher. Around 80-90% of African American women develop fibroids. In addition to higher frequency of cases, we are more likely to have multiple fibroids and more likely to experience painful symptoms associated with fibroids. And lastly, for most women fibroid growth plateaus with age, but for African American women, they continue to grow throughout life.

I was faced with new information and an equal amount of new questions: Would I be in pain forever? Would my periods ever regulate? Will we be able to have more children? And would I be forced to have a hysterectomy like my mother?

I knew that the way to ensure fibroids didn’t increase in size and multiply was a hysterectomy, but I didn’t want that. I needed to hear personal stories. So I found a Facebook group for women with fibroids. I read their experiences and I asked them my questions. Reading firsthand that I wasn’t alone and could still have a normal life with fibroids made me feel much better.

"Though I am learning more about my diagnosis daily, I also wish my family would’ve discussed the risk when I was younger."

When I had lunch with a friend a few days later, my health came up in conversation and she shared her fibroids journey with me. She refused to let the doctor's apathy limit her options and after more searching, she found hope. Research shows that diet and exercise can help in combating some of the discomfort. She told me that once she began taking Raspberry Leaf supplements and avoiding certain ingredients, her fibroids had become much more tolerable. That conversation did it for me. I was finally reassured that fibroids did not have to control my life.

I have an appointment with my doctor for a laparoscopy and a hysteroscopy within the next month to get more information on the size and location of my fibroids. My fibroids journey is just beginning and I have a lot to learn. But it's clear I do not have to have my mom's ending. With research, exercise, and social support, I’m a lot less worried. There are people to talk to and ways to learn how to ease my symptoms and limit the effects of fibroids.

I wish we discussed reproductive issues in connection with sexual education. We shouldn’t be taught through shame for our conditions — we should be taught management. Though I am learning more about my diagnosis daily, I also wish my family would’ve discussed the risk when I was younger. Two of my cousins have similar symptoms and I encourage them to see a doctor regularly. Had we been told earlier, we could’ve made preventative health choices to lessen the symptoms. If I have a daughter someday, I will inform her of the risks. Should she happen to share my diagnosis, we will fight fibroids together.