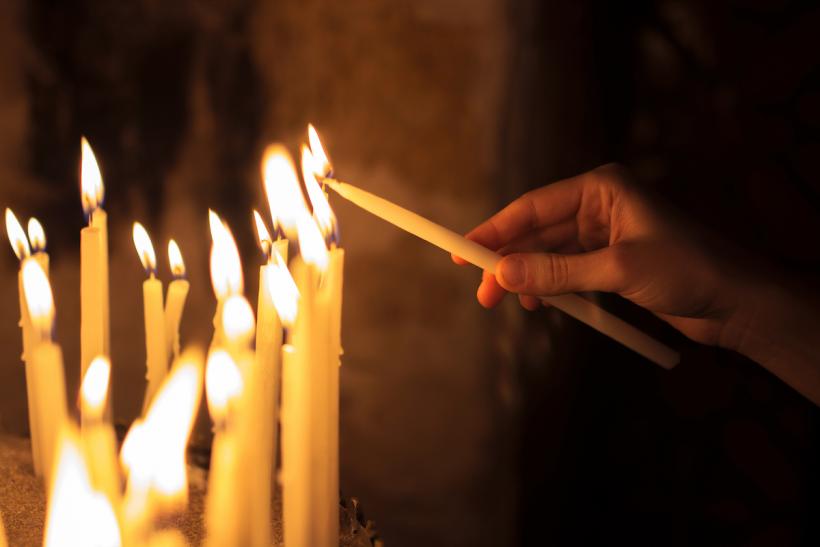 The sun was just beginning to dip below the horizon as I walked through the door of The Next Millennium in Omaha, Nebraska, the tiny bells hanging from the frame tinkling softly. Immediately, I was met with a soft hello from the clerk leaning up against the jewelry cases near the register. We exchanged a brief glance and a smile before I wandered to the back of the store, a list of ritual items held loosely in my hand. The smell of patchouli incense lingered thickly in the air, and I breathed in deeply as I searched for the candles I needed for a ritual later that evening.

Witchcraft, paganism, and the occult have always held a strange sort of fascination for me. Even before I started to seriously pursue a greater understanding of the craft, I would sneak into the Spirituality section at Barnes and Noble and nervously snatch a book of spells off the shelf, sit cross-legged on the floor, and flip through the pages.

For the longest time, it felt like a dirty secret that I needed to hide from everyone.

I was born into a Catholic family in a relatively small Midwestern town. Both my parents converted to the Catholic church as adults, and I spent my childhood attending mass every Sunday and participating in the tight-knit community that my parents found in their local parish. It was a happy childhood, filled with warm memories of Sunday brunches and massive community events that my parents always found time to commit a few hours of service work to.

I went to Catholic school from the time I entered kindergarten through my first year of college. The Catholic Christian faith was firmly rooted in most of what my family did. When I entered my teens, I began to experience a shift in my thinking. The major Catholic milestone of Confirmation came and went, and I found myself participating in it more for the grade (it was a requirement in order to pass the 8th grade) than for the spiritual significance of it.

As I entered high school, that lingering doubt about my family's religious faith continued to grow.

My teenage years were a strange time in my young life — I was going through the confusion of my parents' divorce, learning more about sexuality and coming to understand my own sexual orientation, and experiencing the weirdness of dating and my first romantic relationships. I came out to my family and friends as bisexual when I was 16, and began learning about leftist political philosophy on my own free time. In the latter half of that year, I began to refer to myself as a young anarchist and peppered my school's bathrooms with propaganda and zines I made by myself in my room at home.

Above all else, I spent much of my late teens angry. I'm sure that it looked like typical teen angst from the outside, but internally I was experiencing a philosophical and spiritual battle that overwhelmed me on a regular basis. My entire life, I had been surrounded by Catholic imagery and lore — biblical depictions of piety and strength, blood and righteousness, and always, always, that strange Papal figurehead who best resembled a man sitting on a throne in the sky, lording over his subjects in the hellish and godless kingdom below. The older I got, the more that imagery seemed wrong.

I stopped going to church on Sundays, started sitting during mandatory masses in school. My teachers didn't know what to do with me and the four other girls who decided not to participate in Mass. They tried a number of things, including threatening detention if we didn't participate, before allowing us to sit quietly in protest of the weekly event. Those years were a particularly dark period in my life: a Godless, confusing, tumultuous time when I was unsure of who I was, or who I was supposed to be.

My mother, a deeply spiritual woman, was exasperated at my new political bent. A particularly memorable conversation took place after a long day when I was 17. She asked me point blank if I believed in God. At the time, I did not. I told her as much. She threw her hands up in frustration, the color draining slightly from her face. "I don't care what you believe in, but you have to believe in something!" All I could muster was a defiant shake of my head.

When I was 19, I met a pair of Mormon missionaries while I was going to school in Denver, Colorado. My life up until that point had been a series of endless nights, drugs, partying, and traumatic relationships. I was hopelessly lost, looking for something to latch onto that could show me a life filled with happiness and purpose. At the time, the Mormon faith truly looked like the solution to my problems. Later that year, I was baptized into the church and began attending Sunday sacrament meetings regularly.

Every day, I feel a little bit more connected to myself and my surroundings, and after many years of searching, I feel as though I've finally reached a place where I can truly live a life of purpose.

Before long, I found myself in the same place I was during my high school years. The teachings began to look less like something I could believe in, and more like a never-ending list of rules and regulations that I couldn't adhere to. I couldn't be open about my sexuality among my peers, who viewed it as an unfortunate choice that I should never act upon. My leftist politics were unwelcome among most social circles, and my darker creative projects were looked at with scorn. Even attending Sacrament with my tattoos uncovered led to a few awkward conversations when some of the women, many of whom I didn't know, decided to approach me and offer their opinions about the damage I had done to the "temple" that was my body. My disillusionment with the Christian faith grew.

Almost a year after being baptized as a Latter-Day Saint, I left the church. From that point forward, I threw myself into pagan spirituality.

The beauty of a solitary pagan path is that I can make it into whatever I want it to be. The level of freedom that I enjoy in my spiritual workings is and always has been the biggest draw to this line of spiritual work. By definition, I'm polytheistic. I studied Celtic mythology and folklore in college, and my ancestors come from Ireland and Scotland, so the choice to worship the Celtic pantheon seemed like an easy one.

The elements of both the Catholic and Mormon faith that I enjoyed the most were easy to bring into my pagan spiritual work. I loved setting aside a time during the week where I could re-dedicate myself to my Higher Power, so Sundays continue to be the day of rest, contemplation, and meditation. Holidays in the Christian faith, like saints' feast days and other major holidays, have now been set to the popular "wheel of the year" calendar. On those days, I plan rituals and make a point to open myself up to the intuitive thoughts that I believe to come from the deities that I worship.

I've been actively participating in my pagan faith for a number of years, using the various items that are common among pagans — tarot cards, runes, herbs, and crystals — as conduits for channeling the power of the Gods into specific parts of my life.

Leaving the church was the most empowering moment of my life. For the longest time, I felt out of place, constantly searching for a piece of me that I thought I would never find. I don't regret those years that I spent as a Christian; in fact, I credit my Christian upbringing with giving me the ability to believe and have faith in a Higher Power (or in my case, Powers). What Paganism has given me is a newfound love of and belief in myself as a queer woman of faith. I can revel in my true, authentic self and be welcomed in the pagan community with open arms.

Over the last few years, I've grown from a confused, lonely teenager into a deeply spiritual, confident young woman.

I owe much of my growth to the ritual work and study that I've done. Every day, I feel a little bit more connected to myself and my surroundings, and after many years of searching, I feel as though I've finally reached a place where I can truly live a life of purpose.

As I left my favorite spiritual shop with my bag of candles, herbs, and a new offering dish in the familiar pink plastic sack, the comforting scent of incense clung to my clothes. The darkness enveloped me as I made my way to my car, the cool autumn breeze winding its way through my hair. As I drove home, the incense still lingered, reminding me as it always did of the journey I had taken to get to this moment. Finally, I felt at home with myself, and I wouldn't have it any other way.

If you like this article, please share it! Your clicks keep us alive!
Tags
religion
spirituality
witchcraft
paganism
mormonism
catholicism
Catholic school
faith

I Left The Church To Become A Witch, And I'm Never Looking Back
Melanie Buer