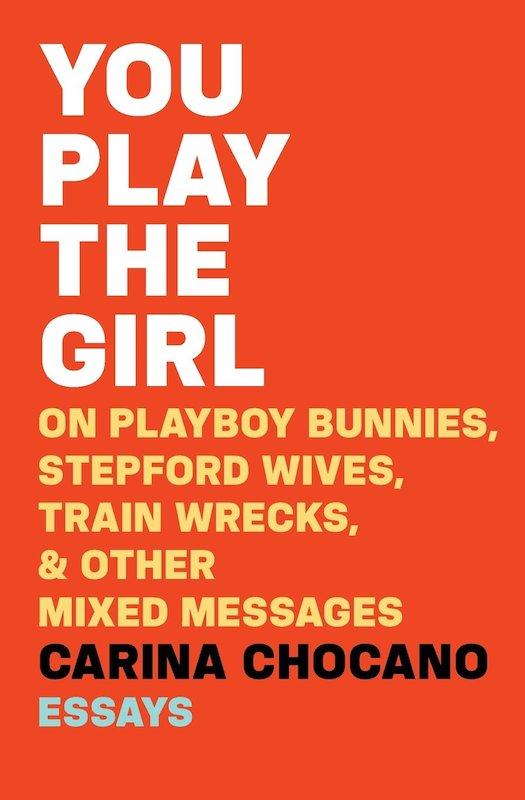 Carina Chocano has a career that would make any aspiring pop culture critic envious — and any aspiring filmmaker nervous. For years she’s been turning her sharp feminist eye on the movies and TV shows that define us — and the stars that obsess us — for fancy publications like The New York Times, Vogue, and Rolling Stone. Her book of personal and critical essays, You Play the Girl: On Playboy Bunnies, Stepford Wives, Train Wrecks, & Other Mixed Messages, is one that deserves a top spot on every self-respecting pop-culture junkie’s bookshelf.

In You Play the Girl, Chocano writes about the quintessential Hollywood “girl” character — a role that has taken various forms over the years, but whose core purpose has remained the same. “The girl” is a sidekick, a sidebar, the eternal plus-one to the central character: a dude (obviously). She may be smart, quirky, cool, and beautiful, but she’s also half-formed. She has to be; she’s not human, remember? She’s just ... a Girl.

Throughout her essays, Chocano deconstructs central characters from movies like Frozen and Flashdance while using them to frame the nagging questions that have arisen in her own life as she’s contemplated how to stay sane as a woman in a dark world. She describes leaving screenings feeling alienated and dejected about how women are still being undervalued in Hollywood. Still, she’s managed to string together bits of hope that things will eventually change.

And things are changing, albeit slowly, as we discussed when I interviewed her via phone about “the girl,” guilty pleasures, media myths, and more.

For people who haven't read your book (yet!), can you give a quick explanation of who “The Girl" is?

The idea came from a quote I read in an interview with Isla Fisher a couple of years after [she stole the show in] Wedding Crashers. So this interviewer asked her, "Oh, you must be getting all the best offers since then." She said, "Actually, I’ve realized that in Hollywood all the [good] parts are written for men, while [women] play the girl."

This was back in 2007. At the time I was working as a film critic, and I'd been noticing the same phenomenon: Why were all these amazing women comedic actors stuck in this “girl” role? I defined it as a kind of supportive, marginal role that was just there to be won by the hero, to reward the hero at the end, or to help the hero become himself.

Has it evolved over the years?

The trope of the girl is kind of like Smurfette. There's all these [great male] characters around her, and then she's just the girl. But lately we're seeing more female characters that are recognizable as protagonists — who have their own desires and needs and problems, and grow and go on their own quests. We're also seeing [a broader] definition of what the heroine can look like.

What is one of the more persistent myths about women’s identities that you've seen consistently on film and TV over the years?

The biggest one is that the woman is always positioned relative to somebody, usually a man. She’s depicted as someone who has no inner life or drives of her own. And if she does have drives of her own, she's usually punished for those desires, or framed as selfish.

She is pretty and quiet and agreeable and always supportive of others and always thinking about others and never takes anything for herself. It's so... ancient that you see it in fairy tales! Virginia Woolf talked about it in her famous essay about killing the angel in the house. She calls “the angel in the house” this phantom; she [wrote something like,] "If there's a chicken, she takes the leg." She's self-sacrificing at all times; she can never have whatever piece of chicken she wants.

What kind of repercussions do you think those ideas have in women’s daily lives and how we feel about ourselves?

I think it has really big repercussions. There's an idea that we don't have our own identities and must be subsumed by the people around us. But we are also subsumed by the story of what a girl or a woman should be; we’re not allowed to break away from that. In the stories we've seen, when a woman does break away, she’s the villain. It's a lesson we learn over, and over, and over again, and we all have internalized it. Men have also internalized it. They were also taught to see certain behaviors as deviant [in women], like speaking out, or being ambitious, or not wanting children.

Can you think of any women characters that have really stood out to you in a positive way lately?

One of the coolest things about a lot of the characters that have come out in the last few years, especially on TV, is that we moved away from this misguided idea that women always have to be positive role models or strong female characters. The “cool girl” characters didn't have any feelings! Those super-confident, superwomen characters were also a messed-up trope.

Now we’re starting to see more recognizably human female characters of all kinds. Orange is the New Black counters that Smurfette reality — look at all of these completely different people that you never really saw on TV until now! GLOW is also really interesting; it basically shows how women interact with their own stereotypes.

I loved The Handmaid’s Tale for the way it [depicted] the way we think. I loved how it showed the effects of oppression on different women who were fairly average.

Wonder Woman was also amazing. Not only was it so much fun, it was so sincere. That superhero was imbued with the sense that she was fighting for justice, and she really felt it. She had skin in this game.

I was going to ask you about movies like Atomic Blonde; movies that feature women committing acts of almost gleeful violence. Did you ever see that 1996 Reese Witherspoon movie Freeway?

I don't think I did. I'm super squeamish about violence. But if something is really smart and it's saying something that feels authentic about an experience, even if it's done in a heightened, crazy way, I usually love it. Even something like Wonder Woman — it doesn't have to be realistic, it just has to feel true. Sometimes those movies can get into weird territory where they become derivative or they take a familiar ultra-violent male character and make that character female. I don't think that, in itself, is interesting.

How do you feel about “guilty pleasure” TV and movies? Do you watch anything regularly on a love-to-hate basis?

Reality TV drives me insane, but it's compulsively watchable. It’s fascinating because there's no better place to see this kind of pop culture influence in action.

Last night I was watching The Bachelorette season finale and I was like, "Goddamn it. Why didn't I watch the whole season?!” From what I gathered, she liked this guy Peter, but he wouldn't propose within a month's time, so she went for the other guy. And it was such a letdown. I felt like, "Oh my god, she just wanted to have this [fairytale] ending." The ring, the proposal. She kept saying how much she loved him, but nobody was buying it. It felt very insincere.

The Real Housewives do things like that, too; the show plays out all these stories about how [women] should be. You can really see how these expectations drive a lot of what they do, obviously taking into consideration that they know they’re performing.

Do you think reality TV has had any larger-scale impact on women? You wrote about it a bit in the book.

I actually started writing about reality TV a really long time ago, like in 2000. In the very beginning, what was fascinating to me about it, and what felt like a huge shock, was that the characters were so diverse; they were just people. They were so much more interesting than the characters that were being written at the time.

Like, the first season of Survivor was completely random. We'd never seen characters like that [on TV] before. But that lasted a very short time, because soon people started to realize that you could get really famous by being on a reality TV show, and there were tropes and characters — the villain, the party girl. People started to go on to those shows with an idea of what they would be and how they would stand out. They started to play a type. A funny early example would be Omarosa on The Apprentice. She went on the show very conscientiously saying, ‘I'm going to be the villain.’ She went in wanting people not to like her.

What can women do to combat unsavory portrayals in the media?

Tell your own stories. Even if you're not necessarily writing books or making films — which I obviously hope more women can do — talk, write, and express yourself. No matter how old or young you are, we've all experienced these things. And even though there's progress and women’s roles have changed, society hasn't always kept up.

If you like this article, please share it! Your clicks keep us alive!
Tags
sidekick
girl
Hollywood
Carina Chocano
sexist
sexism