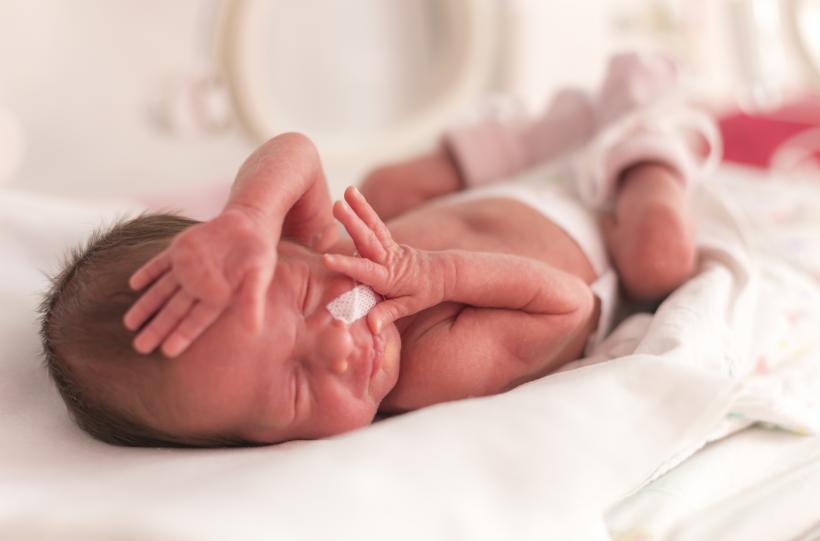 Everyone has described Zoey as a fighter, especially those that have needed to do a procedure on her.

Being born so young, and having less development than a nine-month-old baby, one wouldn’t expect a personality to show in a preemie. At the first moment she was born, Zoey cried and gave the Doctor the middle finger. It’s an amusing tale and most wouldn’t put any real meaning behind it considering it was a new born baby doing committing act.

Last night there was an encore of that event and it came at a time when Zoey wasn’t in the best mood. Her PICC line had to be replaced and that meant a sterile procedure where a vein would be searched for to place the new line and she would be poked. After searching for a few minutes, the nurse found a vein that looked good, but it blew when she tried to place the line. The second vein she found blew once she punctured the skin. Zoey was angry and fought as much as her little body can. The nurse stopped and Zoey was left alone for the next hour.

I stopped by to visit at 2 am and found the room empty except for Zoey. I knew they would try to put a PICC line back in and decided to stop by to learn how it went. Zoey looked grumpy and was fighting the blanket swaddled around her. The nurse came in the room and told me how things went. We decided to do her care time and I changed her diaper and took her temperature. The nurse used a suction tube to clear Zoey’s nose and mouth and swaddled Zoey again with one arm left out. Placed on her side, Zoey made it known that she wasn’t happy sleeping that way with her Oxygen levels dropping and wiggling out of the blanket in five minutes. I called for the nurse and she came back to put Zoey on her stomach, a favorite of Zoey’s in recent weeks. When the nurse turned around to finish things in the room I looked inside to see Zoey’s free hand displaying the middle finger.

“I think Zoey is giving you the bird,” I said pointing out the funny moment.

“Oh my god, she’s really doing it. I heard she did that when she was born. Take a picture!” the nurse replied excited at the sight.

I took my phone out and by the time I had the camera feature on the screen, Zoey curled her finger under losing the opportunity.

“Oh, what a stinker.” The Nurse said watching what happened. “I guess that’s her criticism of being put on her side.”

The nurse left the room and I stayed for a moment making sure she was fine before I went home to sleep.

Zoey’s middle finger reappeared and I took my phone out of my pocket. That moment she curled the finger under again and jerked her hand back under her body. Her little eyes opened and she looked at me for a second before closing them and wiggling her little head in comfort. “You’re going to be trouble, aren’t you?” I asked before leaving the room knowing she was going to be fine.

Zoey’s personality has come out in other was besides her mischievous behavior.

Her eyes have started to focus and when I enter the room and say “hi” her eyes will open and search around until they find me and lock on. Before they would look around and never focus on a specific spot.

Everyone has described Zoey as a fighter, especially those that have needed to do a procedure on her.

Sometimes her mother or I will ask Zoey questions and we will get a response of a hand shooting up in the air. I know these are likely the response to stimulation like the sound of our voice and not the answer to a question, but when I ask “Zoey, would you like a new story or do you want to hear what happens to Bilbo next?” When her hand shoots in the air with the mention of Bilbo’s name, I take it as an answer to listen to more of The Hobbit, and her pulse/ oxygen numbers stay steady the entire time I read to her. That is the important part of these observations. If Zoey is doing good, regardless of the reason for her responses, that is what matters most.

Everyone has described Zoey as a fighter, especially those that have needed to do a procedure on her. Changing her diaper can be a challenge, her strong tiny hands will push down on my hand and diaper before it is closed. Zoey has been known to pull her feeding tube out and keeping her mouth closed when the nurse tries to place it back in. IV lines are not safe from her hands and when she was vented it wasn’t uncommon to see her hand wrapped around the tube with her triceps flexed in a struggle to pull it out.

Zoey is a fighter, a feisty little girl with an interesting future ahead of her. As one of my friends put it “I would expect this from the future leader of the post-apocalyptic world.” Every great story has a great beginning, and I look forward to reading hers.

If you like this article, please share it! Your clicks keep us alive!
Tags
preemie
premature birth
NICU
infant
parenting