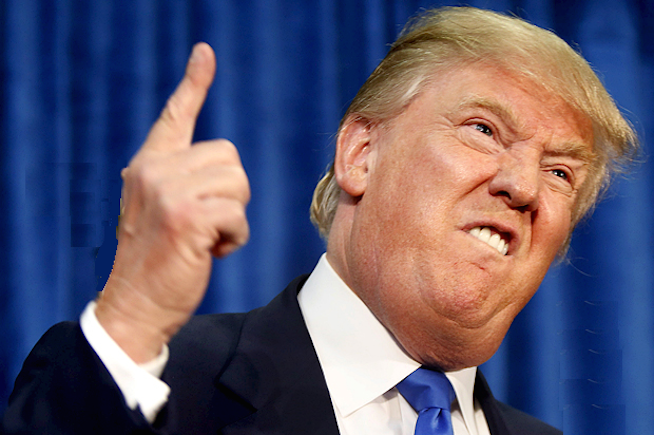 It hasn't been the best week for Donald Trump. Possibly because he's a racist, misogynistic asshole who can't keep his sputtering cesspool of a mouth shut –– but who's keeping track?

Apparently not Trump's supporters, who pushed him back into the number one spot amongst Republican primary contenders this week with 35% of the vote. Thankfully for the good of the United States — and humanity — many people also called Trump out for his anti-Muslim comments (including members of his own party).

Lest you feel like Trump is riding the cresting wave of Idiocracy straight into the White House, I've compiled this week's five best responses to his asshattery for your reading pleasure.

1. The Bald Eagle That Is Done With Trump's Shit

Picture this: A photo shoot for Time magazine's "Person of the Year" award (which Trump didn't win, thank the good lord). A corner office. Trump's hair. A bald eagle perched regally on his arm. It should have been a spectacular photograph worthy of lining your cat litter box but then that bald eagle had ENOUGH of Trump's shit. That regal creature attacked Trump's head (twice!), his hair became mussed as only Trump's hair can be, and the entire thing immediately made internet history in the form of roughly 5 trillion memes.

We are all you, angry and confused bald eagle. We are ALL you.

When Harrison Ford was asked about Donald Trump's love of his movie Air Force One, he had a few choice things to say –– including a reminder to Trump that movies aren't actually real.

"It's a movie. Donald, it was a movie," Ford said, staring straight at the camera. "It's not like this in real life, but how would you know?"

3. The White House Staffer That Just Can't Even with Trump

One White House staffer took off his gloves, shredded them, and lit their tattered remains on fire when he told reporters that Trump's comments "disqualified him" from the presidency and that his candidacy will soon be relegated to the "dustbin of history."

In case that wasn't clear enough, he went on to describe Trump as a "carnival barker."

Yup. Done with his shit alright.

In my 37 years on this planet, I'm fairly certain that I've never agreed with Graham on anything –– until now. When I watched him tell a reporter that we can make America great again by telling Trump to "go to Hell," I wanted to weep tears of joy that at least one Republican isn't ready to follow Trump merrily down the road of fascism.

5. The Gloriously Popular Petition to Ban Trump From the UK

While Trump wants to ban Muslims from the United States, the UK has a different idea. A resident created a petition to ban Trump from the UK that became so popular that it's currently on track to become the most popular petition ever to be hosted on the government's website. At its peak, the petition was signed a staggering six times per second.

Although UK leaders aren't down with banning Trump from their nation (probably because you can't actually ban everyone you dislike from entering your country), they are united in their disdain. London Mayor Boris Johnson said Trump was "out of his mind" and Prime Minister David Cameron called his policies "divisive, unhelpful, and quite simply wrong."

Coming from the Brits, that's roughly akin to lobbing my entire vocabulary of expletives at Trump.

If you like this article, please share it! Your clicks keep us alive!
Tags
donald trump
GOP
2016 election