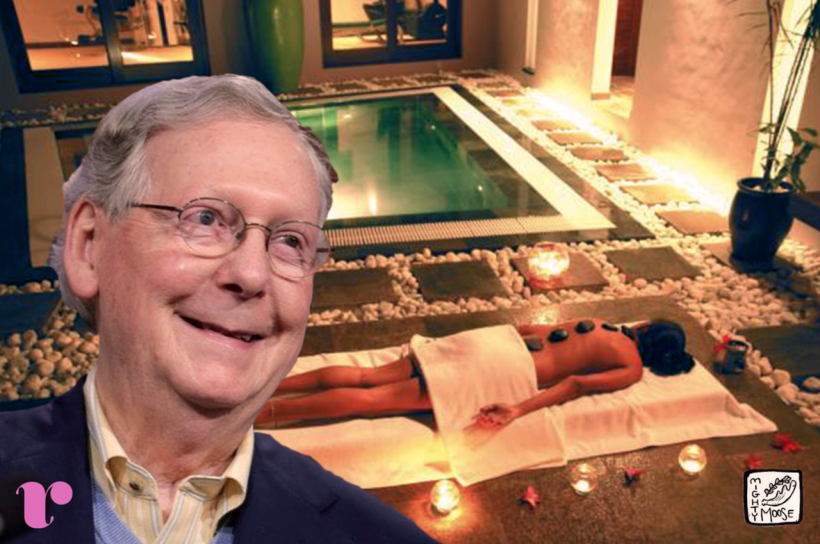 You, dear senators, have been busy trying to bring about the apocalypse, which doesn’t leave a lot of time for self-care. That’s why it’s imperative that these next four weeks be about one thing and one thing only: your self-care. Here are a few ideas to get you started

If you’re a Republican senator, you’re entering into the August recess coming off a tough loss. You put up a damn good fight, but alas, you weren’t able to repeal the Affordable Care Act before your four-week break. Twenty-four million people are keeping their health insurance. Medicaid still exists. Individuals with pre-existing conditions still have a legal right to obtain health insurance. Ugh. You’re probably feeling pretty bad about all this, which means it’s more important than ever to take good care of yourself.

Self-care is something the general population has gotten really good at these past few months. As it’s become evident the apocalypse is upon us, we’ve been doing a lot of therapeutic journaling and taken a shit ton of bubble baths. It has helped, kind of.

But you, dear senators, have been busy trying to bring about the apocalypse, which doesn’t leave a lot of time for self-care. That’s why it’s imperative that these next four weeks be about one thing and one thing only: your self-care. Here are a few ideas to get you started:

So you weren’t able to pull off a last-minute nationwide health insurance repeal and Planned Parenthood defunding coup, but hey, not all hope for hope-crushing is lost! If defunding crucial community services is what makes you feel good, there are myriad ways to do it on a smaller scale — you just have to get creative.

Call in a code violation for the crumbling building that houses your city’s public health clinic. Open a bunch of new library cards under fake names and empty the shelves at your local library. Offer to sponsor a local little league team and then yank your check away triumphantly when the bill for uniforms arrives.

There’s a reason adult coloring books are all the rage: art is soothing and centering in times of stress. Grab your colored pencils, print out a map of your state, and re-draw some districts to guarantee your re-election. Then pass a law to make it so. Don’t you feel calmer already?

A lot of your constituents are angry with you right now. Pretty much all of them are, actually. Liberals are upset you tried to gut the Affordable Care Act for a tax cut; conservatives are disappointed you didn’t pull it off; and the people in the middle are all, “What exactly are we paying you to do?” Now is the perfect time to turn off your phone, cancel your town hall meetings, and tell your assistant to hold all calls from the press, because it’s time for some serious “me time.” Everyone will totally understand.

Write a letter to John McCain (but don’t send it!).

Therapists frequently recommend writing a letter to someone who has upset you as a way to release pent up emotions. This is your chance to express your anger, disappointment, and feelings of betrayal about John McCain’s dramatic vote against the health care bill. Write him a letter and put it all out there. Don’t hold back. Tell him how much it hurt you when he turned his back on his party. Tell him how much you wish he’d stayed at the hospital instead of returning to Washington. Put it out there that you’ve always low-key resented the fact that HE gets the nickname Maverick when everyone knows “Top Gun” is your favorite movie of all time. Write it all down, then light the letter on fire in the kitchen sink and watch the ashes (and your partisan resentment!) float away.

When work stress feels all-consuming, it’s important to remember why you’re doing what you do: gutting the health care system, rolling back reproductive rights, fanning the flames of xenophobia, and revoking fundamental civil liberties from marginalized communities are all noble goals that deserve your attention.

Rest assured you’ll have another chance to do this important work when congress is back in session. Right now, you deserve a warm bubble bath with a dog-eared copy of Atlas Shrugged and a “do not disturb” sign on the door.