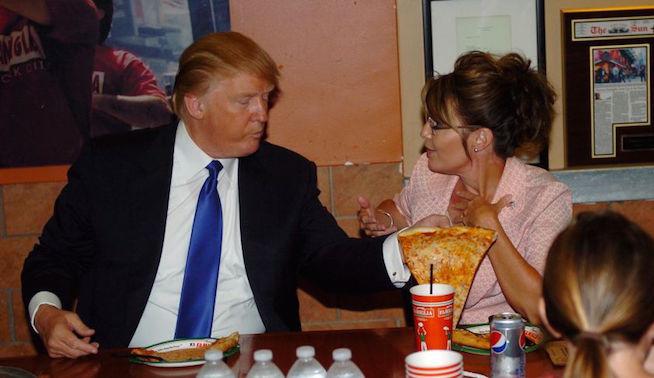 BREAKING NEWS –– or maybe epic flashback? I don’t know what to call this exactly. Word has it that Sarah “Half-Term Governor” Palin is getting set to endorse Donald “Multiple Bankruptcy” Trump in the 2016 Presidential election!

In a collision that may well be the worst of political discourse since Aaron Burr retaliated against Alexander Hamilton by shooting him to death, Mama Grizzly is rumored to have chartered a plane to Trump Central to talk turkey (and maybe eat pizza with a fork) with the Trump 2016 leadership.

The implications of this are staggering. First of all, Sarah Palin is still alive and there are people who still think she has political relevance. Second of all, there are people who think Sarah Palin would be a Trump cabinet pick, which is the most horrifying thing I’ve heard about Sarah Palin’s prospects since John McCain nominated her to be his vice president. Finally, will Trump use Palin’s hairstylist and swap out his signature tousled-roadkill look for a highlighted updo? THE PUBLIC AND THE FASHION POLICE WANT TO KNOW!

Only time will tell what’s going on between the Donald and the Sarah, but we can be sure of one thing: the media will spend the next few hours shitting their pants over this meeting of the mediocre minds.

If you like this article, please share it! Your clicks keep us alive!
Tags
donald trump
Sarah Palin
trump palin
2016 election