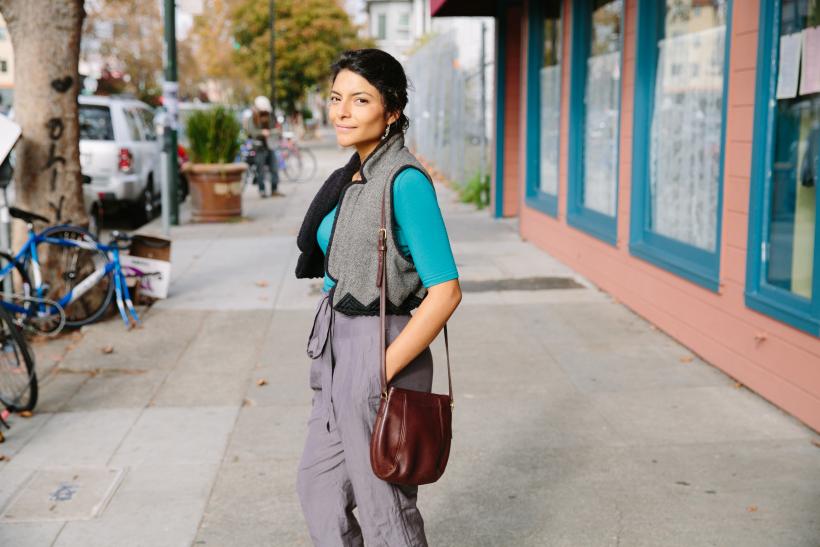 I'm going to print photographs. I'm a professional fine art photographer and I work in the darkroom.

Where do you work? Do you work at home?

How long have you been doing photography?

I've been doing photography for 7 years, Rayko for probably a month.

What kind of things do you like to photograph?

Are you from the Bay Area?

No, I moved from New York maybe like a month ago. I'm very new and I'm just trying to get used to the Bay Area.

What brought you out here?

My partner. Yeah, pretty much. That was kind of like the only reason.

What's been the biggest adjustment?

Not having a lot to do on the weekend. Not listening to really good music. I'm really struggling to find more interesting things to do.

What are your favorite things to do so far?

Let's see . . . I like going to a lot of nature places, like Tilden and the Oakland hills. I like the fact that we can just drive and be in Northern California—the beach and the redwoods. So that's really nice. I do like a lot of nature so I'm happy!

Who or what have been your inspirations lately?

Inspirations . . . that's a nice thought! Bookmaking—I'm actually currently working on a book with a publisher in London, so I'm doing a lot of research on how to book bind, how to make books, design and things like that. There are a couple of places here that are really good about that, and that's been really nice.

What places have you discovered?

TBW and then the Temescal Bookstore. I think that one is just called “The Book Shop.” Something like that. It's really nice.

Are there any specific books you're looking for? Are you looking at fine art photo books?

What I'm doing is a fine art photo book, but what I've been seeing is a mix of different things. And it's beautiful to see how people can pay attention to details, and be so fascinated by things like the roofs of the houses in San Francisco. I like that. There are a lot of books on design, and they also have rare books. It's been cool. And I live nearby, so it's nice just to go check out some books. They have some books on Edo paintings, these Japanese paintings I'm super into.

Wow, they're just so . . . magical and so simple. It's interesting when you have a hard time describing things, because they just touch you so much! I'm really into things like that, and these Edo paintings are doing that to me right now.

Have you had any challenges that you've overcome recently?

This is going to sound super, super shallow but I like swimming and I haven't been able to swim, so I'm doing more yoga instead. Maybe it's not a challenge, but I'm trying not to get into this place where I'm like, oh, I'm sad that I can't. Because when you move from a place like New York City to a small place like Oakland it's easy for the mind to start endlessly comparing. So I'm trying not to do that, and instead just appreciate what I have here and instead of trying replace things, to try and find new things.

Where were your favorite places to swim in New York City?

I lived in Greenpoint, and there's a neigborhood pool there, and one of my best friends lives uptown and she also has a pool next to her house so we'd go to her place. And the pool's like $2! And it's open from 5:30 am to 9:30 pm. It's ridiculous.

Tell me about your outfit—this vest is really interesting.

So the vest is Anna Sui. My mom used to work for Anna Sui—she used to be the pattern maker for her. This shirt is just like a super simple thing. I'm really into this color right now. And then these pants I inherited from a woman that I used to cat-sit for—instead of giving me cash, she gave me these pants. I was like, I'll totally take that. The boots are probably the most expensive shoes I've ever had but I wanted to put some money into having good boots. And I thought today would be a good day to wear them.

They go well with your bag too.

Oh! Yes, this is a coach bag that used to be my mom's.

Your mom must be very stylish!

Yeah, she is! She'd love for her daughter to be more into fashion, but I'm really not that into it.

I just noticed your earrings too. Where are those from?

I'm originally from Ecuador, and I bought these earrings in an indigenous fair of people who were opposing working in mines in Peru. Instead of that, they're using the silver that they've extracted to make jewelry. But all of the jewelry that they make reflects their cosmology. So there's like secret patterns and forms that represent something for their culture.

Have you delved into what your earrings possibly mean?

The earrings no, but for the necklaces that I have, definitely.

What do the necklaces you have mean?