Take The Cake: No, I Won't Cut You A Smaller Slice Of Cake 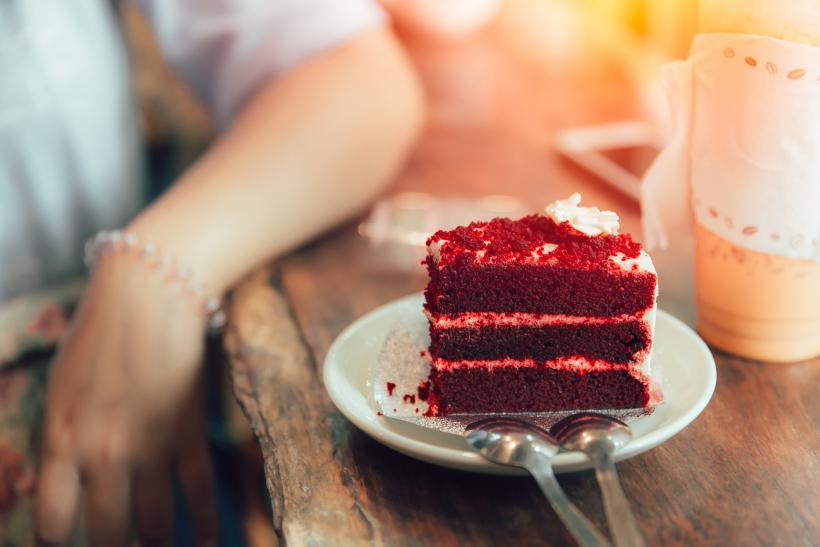 There is a ritual that happens at birthday parties and office celebrations all over the country. There's a good chance that it's happening somewhere right now as you read this.

A Cake Related Fatphobic Incident — or CRFI for short — is that moment when it's time to eat delicious cake, and an otherwise joyous experience gets ruined by a moralizing impulse. There's almost always at least one person who delays the cake experience because they personally feel compelled to publicly declare that their slice is too large or that it has too much frosting on it, and that the person cutting the cake (almost inevitably a woman) needs to do some disproportionate amount of work in order to accommodate their need.

Recently someone on Facebook told me about a CRFI during which she was personally asked to scrape off the frosting from one person’s cake and add two forks to it because they were planning to share the naked cake.

I was aghast. If you have never been relegated to cake-cutting duty let me explain to you what it feels like. Cutting cake is way more difficult than you would imagine. I am sure that it is because of misogyny that people believe that skills such as cake cutting are things that all humans are endowed with and that anyone can just do.

I was one of those people who mistakenly believed this odious lie. Until I had to cut cake. There are specific challenges that I hadn’t anticipated. To begin with, you must figure out how to make the establishing cut: do you want to trace gently into the frosting with a knife so that you can use it as a guide or are you going to be cavalier and just free cut? Triangles or squares? Everyone has an opinion about how to cut a cake and so you're going up against long-held belief systems on the “proper” way to cut and serve.

Then there’s the fact that the knife gets dirty very quickly, so it makes the incisions less and less precise with each slice. You've got to balance the cake once it’s been sliced. You’ve got to get it onto a plate, which is a very complex combination of physics and geometry or something. Then you have to enlist someone else who's willing to pass out the cake because otherwise you're doing double duty.

And above all of that, you often additionally must deal with that one or two people who inevitably start a chain reaction. Someone needs to let everyone know that the cake is too big for them. Then once that person says it inevitably others join in. What could have been a wonderful, beautiful and joyful experience is now a race to the bottom.

Let's take a step back and view what’s happening through a critical lens. CRFIs typically happen in environments where there are primarily or exclusively women. Women are disproportionately negatively affected by diet culture because diet culture maps onto sexism. Like many parts of diet culture, there is a significant performance component. You have to show others that you are being “good.” Controlling how much you eat is part of what it means to be a “good woman.” You get to establish your moral superiority and also enlist other women into falling in line. It's pretty atrocious patriarchal stuff, but it is perceived as fairly innocuous when in fact it isn't. Recently a CRFI happened to me at a birthday party.

There was a very expensive and very gorgeous cake. Chocolate. I was ready for that cake. I was pretty sure that there was ganache inside of it. Sure, there was buttercream on the outside, but I could sense the sneaky ganache. In the midst of my ganache reverie, I was interrupted by a woman who felt it very important to convey that the slices of cake that my friend was making were too large. She really, really needed to have a paper-thin slice of cake, and she felt that it was her right to ask that my friend perform an extra level of labor to the already pre-existing, previously detailed difficulties of cake cutting.

I was very annoyed. I sort of suppressed a tiny eye roll. I may not have succeeded in suppressing it. I can’t be sure. But I found that her proclamation shifted the energy immediately. Certainly it shifted my unequivocal ganache-lust into a flurry of frustration. It stirred up old feelings and the recollection of my weight cycling, food restriction years. Immediately her words made me consider that perhaps she was judging my slice of cake and that perhaps it was not a safe environment in which I could glut on cake freely (because, honestly, we all know that no one just judges their own slice of cake if they’re a cake judger). I was very frustrated that she was choosing to be an agent of patriarchy when we all had the opportunity to be cake allies together.

It's important to see this ritual for what it is — a public practice of fatphobia.

This kind of behavior is a way for people to keep other people in check through food moralizing, surveillance and policing. These are the mechanisms that are at the core of diet culture and weight control. The idea that you can position yourself as superior to others through self-control and self-denial is deeply hurtful. It's important to recognize that even if this may not be an individual's intention, that CRFIs have a history of creating a hierarchy among women and ultimately in maintaining misogynist expectations in primarily or exclusively women's spaces. I know that some people do not love cake or don’t want to waste cake, and I know that some people are sensitive to sugar or have allergies that make their feelings about cake complicated. Obviously, these are all legitimate.

However, I’d like to suggest considering the following: practice just taking the slice you’re given or simply saying “no, thanks” without any further exposition or apology. You don't owe anyone an explanation for why you might scrape the frosting off your own cake or why you ate half the slice and not the whole slice. Don't make it someone else's job to scrape your frosting off or cut a slice even thinner and more precarious than the one they're already cutting.

For folks who hate wasting food, please know that there is a good chance that the cake is not going to be finished. Most of the ingredients that go into making a cake are very cheap. It is very likely that part of the cake is going to be thrown out regardless of how big or small your slice is. And it is okay if part of that piece of cake that is going to be thrown out was on your plate. At the end of the day, this article is a plea for an end to cake negotiating and public pastry processing.

If you are a repeat CRFI offender and feel implicated by this article, no need to be defensive! You live in a culture that is dedicated to our collective dehumanization, and you were unwittingly enlisted in the project of sexist complicity, friend. You can totally stop investing in patriarchy, like, right now and join my friends and me in committing to the collective liberation of women and fat people by ending the policing and moralizing of cake products.

If you like this article, please share it! Your clicks keep us alive!
Tags
take the cake
Virgie Tovar
fatphobic
fatphobia
food shame