The Trust Game: How I Changed For My Partner 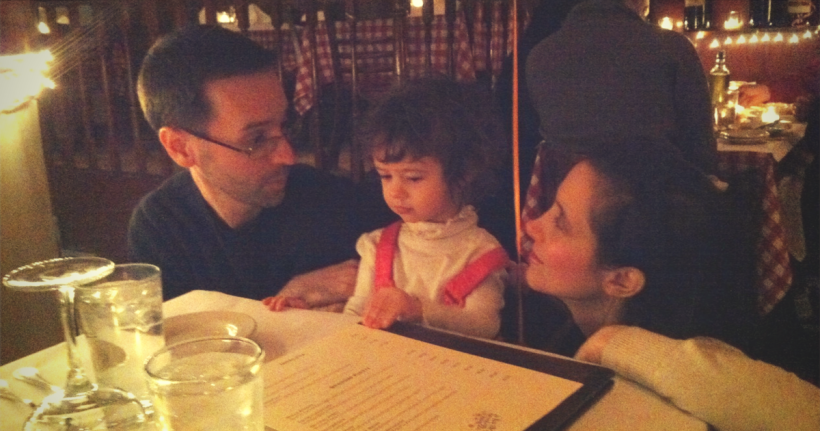 He placed a condition on marriage: I had to trust him.

There's an exercise in which a person is supposed to fall back while another person stands behind her, to see if the falling person can trust the other person to catch her. It's called a trust exercise, and for 30 years of my life, I was unable even to attempt it.

When my now husband got down on one knee by a lake in Rhode Island on a midsummer's eve, and proposed that we hitch our wagons to the same star, I came as close as I’d ever been to falling back into another person's arms.

For years he had discussed this exercise with me. His only hesitation about a life together was my hesitation, not about him — I knew he and I fit hand in glove — but my distrust of permanent partnership.

How could he build a sturdy foundation with someone who was forever anticipating tectonic shifts?

I have been laboring at the same art forms  —acting since I was 11 and ballet since I was six — all of my life. I have never abandoned a friend or even changed my hairstyle. I have much in the way of internal consistency. And yet I am prone to taking flight. Conflict makes me nervous; so does being sedentary.

My parents divorced when I was ten, and my schedule was one of constant jumping from one apartment to the other. My parents divided up the week so that I switched apartments nearly every night. Additionally, each parent moved to a new place for every year of high school. I collected old addresses like postage stamps — or perverse badges of resiliency. I developed a passion for packing and preparing to depart a place at a moment's notice. I wrote lists of anything I might need on a trip, as though I were a businesswoman or an international spy. It became a compulsive game. I had to make it fun to survive the roiling anxiety my parents’ arrangement caused.

Underwear, pens, books, shoes, shirts. What else, what else, what else? Was I ready? Always this question first: was I prepared to leave any apartment immediately? The idea of “home” was replaced by the concept of mere “destination,” and all destinations felt temporary.  I occupied spaces without relaxing my weight; I perched without exhaling.

This anxiety followed me for half my life.

I was forever intolerant of my own state of being — restless, unmoored, but somehow more comfortable bobbing from one relationship to the next, one city to the next, than I was committing to a path or person.

I moved back and forth between New York and Los Angeles twice; in the former I felt hungrily disconnected from the city’s glamour, splendor, and pace — an outsider; in the latter I felt equally isolated and flat, suddenly, absurdly sure that the sidewalks of New York would restore my equilibrium, like a pacemaker for the soul. And I’d get on a plane once more.

Then I met my future husband. On a warm December night, we walked to The Paris Theatre on Fifth Avenue. The film was forgettable, the night a perfect memory. We sat resplendent in the balcony — enjoying every moment, holding hands, whispering jokes, sharing candy.

Courtship settled into a groove that was both romantic and secure. I had never sensed “home” in another person. I’d met the love of my life. He was funny and sweet and decent. He cared about the things I cared about. Still, my urge to flee reasserted itself. I was, as ever, coiled and ready to spring. But a more powerful muscle was at work: my heart, which now belonged to my future husband.

He placed a condition on marriage: I had to trust him.

There was nothing as undermining as a person lacking faith in you, he told me, and he couldn't operate under the daily knowledge that our relationship might be fleeting. He knew that in my experience, marriages ended in divorce and that as a child I’d constructed a game, using suitcases, extra underwear, and bus schedules — the stuff of shared custody — as my props.

To my husband, this casual acceptance that things might fade, or worse, erupt in ground-shaking conflict, was incompatible with happy monogamy. Our shared presumption had to be of abiding companionship through life’s inevitable tumult — marriage as a port, not a thing to eventually flee.

After we were engaged, we tried the trust exercise several times. I never managed to do it; I always broke my own fall before he had the chance to catch me. Still, we got married on a Gothic, rain-swept October night nearly four years after our first date. As the wind rustled along Germantown Avenue in Mount Airy, Pennsylvania, we exchanged vows in another old theater — The Sedgewick — built in the 1920s. Its paint was peeling, and the art deco flourishes in its lobby were rusty and darkened by soot; this sense of history, of permanence, was well suited as the backdrop to marital vows. It also lent drama appropriate to our professions: I’m an actor, and my husband writes screenplays.

Ultimately, it was my husband who decided to play the trust game — to fall backward — and I’ve caught him every day for ten years.

He's caught me right back. I’ve proved my own trustworthiness in the accumulated trust falls of a decade’s worth of marriage. It was not just meeting the right person, or even marrying, that stabilized me; it was the investment of incremental bits of trust over time. My husband posed the challenge, and I accepted it. The reward has been immeasurable.

I still like packing; some habits die hard. But now I channel my passion into placing my family’s things in the same suitcase as my own. My idea of safety is now rooted in people, not luggage. I am no longer perpetually perched, nor living life as if it were a string of train stations. I still love taking flight, but I can’t imagine landing without my flock.

If you like this article, please share it! Your clicks keep us alive!
Tags
Trust
Relationships
marriage
Love
trust game
trust exercise

This Is How It’s Done: Teaching My Child What I Never Learned Growing Up
Leslie Kendall Dye

Still Eleanor: The Brain Hemorrhage That Stole My Mother From Herself
Leslie Kendall Dye

The Trust Game: How I Changed For My Partner
Leslie Kendall Dye