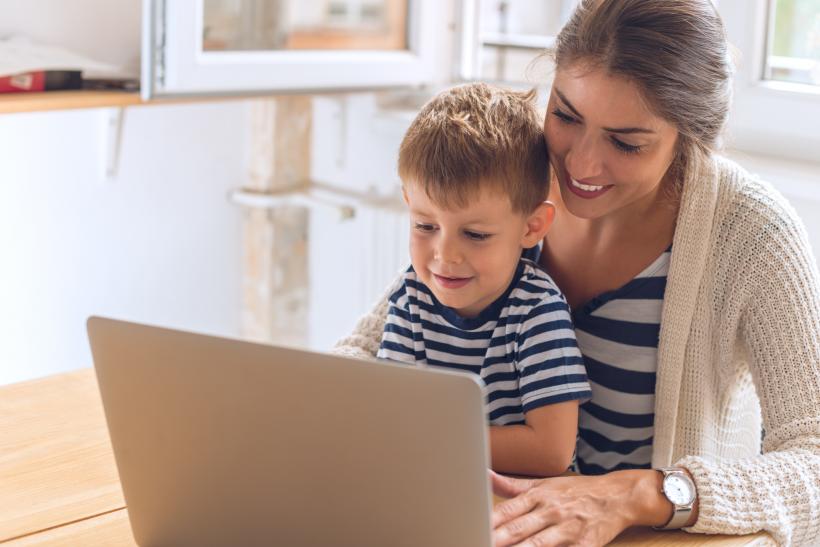 The money is great, but it is not the best part of becoming a working mom by far.

Becoming a stay-at-home mom was never something I gave a second thought. As soon as I became pregnant, I knew that was the path I would take. My husband was still in school, I had just graduated. We couldn't afford childcare, especially not with two sporadic (often nighttime) retail schedules, and his job was the only one with benefits. It wasn't really a choice. It was the only way.

I wasn't upset about being a stay-at-home mom.

Even if I didn't have much of a choice, it was definitely what I wanted. I wanted to go all in on motherhood, and I didn't mind quitting my job because it was my college job. It was selling clothes to snotty, upper-class women who treated me less than human. Trust me, there were no tears shed about leaving that sector of the workforce.

Yet it didn't take long for me to realize that leaving the workforce, even if it wasn't my dream job, had shifted the balance of power in my relationship with my husband. He suddenly became the sole breadwinner, and without his income, I knew I couldn't survive.

I was dependent on him, on his money.

We were no longer in an equitable relationship the way we had always been. It wasn't intentional or avoidable, but it was true nonetheless.

Of course we adjusted to our new monetary situation. We shared a bank account. I controlled the budget. We talked through purchases and made savings goals together. All of our money was just that: ours. But in the back of my mind I couldn't shake the voice that kept saying, "except it's really his."

In fact, in some of our less-blissful marital moments, he'd make quips about how I wanted to spend his money. It was a subtle and horrible way of being reminded that I really didn't own anything. That I didn't have financial control over my life, even as I pulled the purse strings.

While I wasn't concerned about him suddenly leaving me (a more common occurrence than I wanted to believe), I knew my life would be in ruins if he did. I resented the fact that I had no money of my own, and at times, that couldn't be separated from resenting him.

I dabbled in making custom cakes for weddings and birthdays to have a little cash of my own, but it wasn't a lucrative endeavor. In fact, in some ways attempting this side-hustle made me feel like even more of a failure. I’d spend hours working on a cake, and often make $10-15 total, once I factored in the cost of ingredients.

If I was doing it purely for the joy of having a money-making hobby it would have been great, but that wasn’t my motivation. I wanted to have financial value in my relationship. I wanted to even the playing field. I wanted to know with absolute certainty that I could stand on my own two feet if I ever needed to. That I would never feel pressured to stay in my marriage because I couldn’t pay my own way in the world.

So after a couple years of floundering side-hustles, I set my sights on my dream career of becoming a writer.

I had written freelance pieces here and there throughout my two years as a stay-at-home mom, but I was finally ready to go all in. I talked to other writers, joined freelance groups on Facebook, tuned up my resume and started writing every day. It took months of one off jobs and some writing for free, but slowly things began to change.

I got one steady job, then another, then another. I became obsessed with tracking down new jobs, writing the next story idea that came to mind, pitching big magazines and honing my skills. After a couple years, I had a full-blown writing career — many months out-earning my engineer husband. I began setting work hours for myself and put boundaries on my time. I had finally realized my goal.

I was financially independent in a way I never thought possible.

The money is great, but it is not the best part of becoming a working mom by far. Having my own career has shifted the power balance of my relationship back to a place of equality. My dependence on my husband no longer hangs over my head; it put my marriage back on solid ground.

The first month I out-earned my husband, he made a comment about how I didn’t need him anymore. He was right.

We were on equal financial footing.

He could walk out the door and even though it would break my heart, it wouldn’t break my life into pieces. I didn’t need to be with him, I wanted to be with him. It’s a distinction that is much easier to make when there are no financial strings attached.

If you like this article, please share it! Your clicks keep us alive!
Tags
mom
working mom
writer
marriage