7 Things I’m Not Afraid To Tell My Sons About Love, Sex And Their Bodies 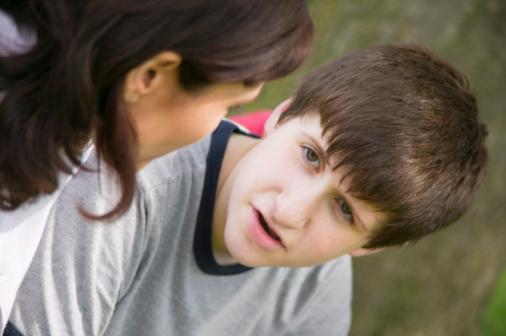 I know that as your mom I can be super annoying. I say things like, “Did you wash behind your ears?” every single time you take a shower, even though you’re old enough to wash behind your ears without your mom yelling things from behind the bathroom door. But there are some things I want you to know, not just as your mom but also as someone who cares a lot about the way society treats boys and men when it comes to sex, shame and their bodies.

I’m spelling them out here so that other parents can talk about these things, too, and other boys can see that there isn’t just one way to grow up into a good man.

There’s already a ton of pressure on you boys to be “manly,” and you’re nowhere near grown men yet. Since you guys were two years old, you’ve heard people saying, “He’s all boy” or “Boys will be boys” as an affirmation of your masculinity, and I think that probably has affected you in some way.

Just know that even if you like what most guys like, you don’t have to buy into every part of what you’re told is manly. If you want to do stuff that other people think is girlie, Dad and I don’t care. We support you. Wear pink or don’t, it’s just a color. Become a football fan or don’t. Paint your nails or don’t. None of these things make you more or less of a man, and it’s not on us to decide for you.

We see how much pressure is on you to “man up” and be tough, and you don’t have to do that with us. You can cry, you can relax, you can let your guard down. We’ll always stand by you.

2. You deserve the right to bodily autonomy.

Even better, you should be with people who practice affirmative consent and wait to hear a “yes” from you before touching you in any way, instead of waiting for a “no.”

We believe that every part of your body is yours to do with what you please. Your gender and your sexuality, as well as your sexual expression belong to you.

3. You should never touch anybody without their consent.

It’s that affirmative thing I just talked about. Keep your hands to yourself, and if you want to touch someone else, ask first. When you start dating, ask to touch the people you want to hook up with before you do. Ask if you can kiss them. Do it in a sexy or a playful way. Don’t wait for someone to say “no” to something you’re doing, that means it’s too late.

And don’t hook up with or touch people who are too intoxicated or otherwise unable to give consent. This should be a no-brainer, but I’m going to say it just so we’re clear.

I know you see guys with huge muscles and small waists everywhere you look. Spider-Man and Superman have six-pack abs now, but did you know they used to be somewhat normal-looking guys back in the old movies, action figure and comics? Today, Hugh Jackman’s Wolverine is held up as the model of masculinity, even though he’s supposed to be a mutation of a human being, not a normal dude! Jackman got that body by working out with a trainer, by having a nutritionist and chef, and doing it all day, every single day. Getting that body was his job. It’s not your job to look like that.

You don’t have to be jacked. You don’t have to be ripped. You can be yourself and people are still going to want to be your friend and date you. Just treat your body like you want it to last a long time, by exercising in moderation and thinking about giving your body the nutrition it needs. Your great-grandpa rode his bike, took a walk, or shoveled snow every single day and look at him, he’s over 95 years old and still fun and happy.

Take the pressure off yourself to look like a male model and just be your own, healthy self. We don’t care what size your body is, we only care how big your heart is.

You might wish Dad and I could be as “cool” about drugs as we are about sex and sexuality, but we’re not going to be.

Here’s the thing: You come from a long line of addicts. You’ve lost relatives to overdoses and addiction-related diseases. You’re not entering into this drug and alcohol situation with a clean slate like some of your friends may think they are. There are genetic ghosts looming over you and you won’t know until it’s too late if you’re gonna be the one who can’t stop, and whose funeral the whole family attends like we did just a few short years ago.

People around you are going to do some drugs, and I’ll be brutally honest: nobody can promise you that you’ll come out of the experimental phase unscathed or even alive. Yes, some drugs are more dangerous than others, but any substance that helps you escape reality can become a crutch if you don’t need it for medical reasons.

Neither Dad nor I do any drugs at all, and we’re really happy. We have fun, have amazing friends, are deeply connected to each other, and find our thrills and excitement out on the ocean, in trying new things, or on our bikes. We’re here to do those things with you, any kind of thrill-seeking you want, be it dirt bike riding, playing a crazy new video game, performing on stage in front of a packed theater or whatever other things you feel passionate about.

6. Being alone sometimes is a good thing.

Maybe you already know this, but you don’t always have to have a bunch of people around. I know it’s fun to be with friends, I like it too, but it’s important that you set some time aside every day to just be by yourself with no technology. You can read, think, write, meditate, take a walk or a run, draw, play music, whatever you like that makes you feel centered or calm. Just remember to respect who you are enough to give that person (you!) some down-time to regroup and come back to yourself.

On the other hand, know that you’re never really alone. You’ve got a family that loves you and wants to hang out with you, and you can reach out to friends if you need to talk or want some support. You can be a good source of support to others, too.

Once you start dating, it gets harder and harder to be alone. You will probably really like the sense of validation you get from having a partner. This is totally natural, but remember that you’re just fine on your own, too.

7. You don’t have to be afraid or ashamed of your desire.

It’s weird, but some people might going to try to make you feel bad about the lust or desire you may come into as you grow up. Regardless of whether you’re straight, gay, bi, or trans or anything else, people will try to put their own weird shame upon you.

Don’t fall for it. You’re great. You’re totally fine. Even when your feelings of love or lust feel totally crazy and new, you’re still you and you’re still okay. It might sound overly simple, but feelings are just feelings and we can’t control how we feel, only how we behave. It doesn’t matter how strongly you might want to connect to somebody or get their attention, you don’t have the right to demand attention or even attraction. That means no groping, obvious staring or catcalling, and I hope you’ll stand up against people who do these things to others.

And despite what a lot of people are going to tell you, love and sex aren’t necessarily entwined. They can be, and that is often the most fulfilling way to experience sex for a lot of people, but the key to healthy sexuality is being honest, open, and safe with your partner… and yourself.

Lust and desire are awesome, and eventually it all starts to make sense. Dad and I are here to talk about what you’re going through, if you want. We won’t judge or think you’re weird. It’s a new and weird time, but it’s also totally normal.

This story by Joanna Schroeder first appeared on The Good Men Project.