6 Ways Travel Changes When You Don't Take The Kids 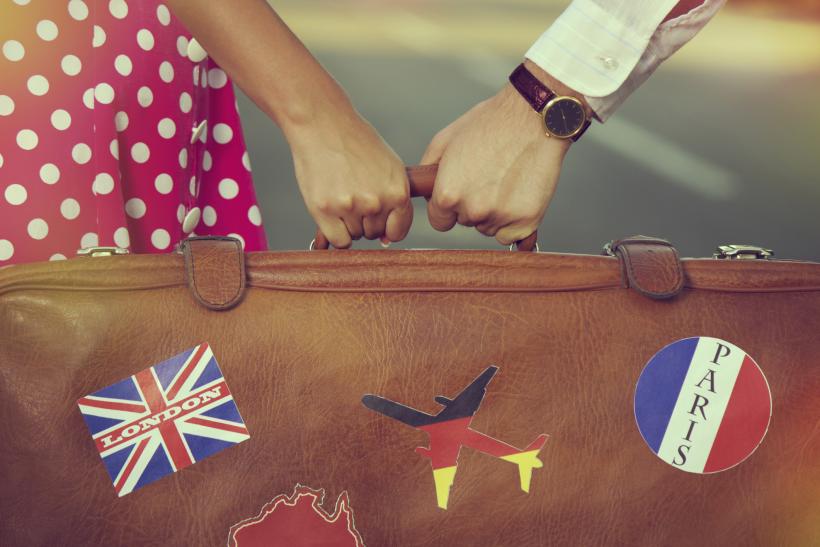 Before you decide to have kids, you worry about things. Things like money, responsibility, sleep. I worried about these things. I worried about a lot of things. But the reality of what being a parent is like doesn't really hit you until you actually have kids. And they turn your life upside down in the most beautiful, poetic way. You see the world in a different light. Everything changes. But also, EVERYTHING CHANGES.

In the last five years, my husband and I have only been alone together (for more than two hours) twice. Two times. One of them was last week. We traveled to Las Vegas so he could present at a conference and I could sleep and eat and write and knit. For three whole days. Prior to this week, pretty much any traveling we've done has included anywhere from two to five kids—and approximately 17 times the luggage. Since it's been a while since we've traveled alone, the differences are pretty stark and especially obvious.

We are so accustomed to traveling with a diaper bag and my bag and his bag and the bags of all the kids plus their pillows/blankets/toys/snacks that when we pack for ourselves, it barely feels like packing at all. My purse. His laptop (because, work conference). Two small carry-on bags. You'd think, oh Vegas, you'll need OUTFITS. Because fancy. Nope. Two pairs of shoes. Three changes of clothes. Lingerie. And I didn't even take one of the things out of my bag. Packing might have been an elaborate action of picking and re-picking and packing and re-packing with kids. But without kids it's essentially, throw some shit in a bag. Leave,

With kids: There are 72 snacks. Water. Toys. Books. Earplugs. Probably an iPad. Maybe Benadryl. Fervent prayers that the cabin pressurization won't result in prolonged screeching and invite the stares of every passenger and possibly even the pilot. Probably Benadryl. Without kids? No one is going to cry. At least no one you're in charge of. Unless you board your flight only to discover (as we did) that the alcoholic beverage service had been canceled. Then you may actually be sobbing. But you can disguise your own tears of desperation better than trying to muffle your toddler's incessant screaming.

Eating while traveling with kids is a whole thing. First you have to pick a restaurant that the kids will even GO IN. Which means finding a restaurant where you won't be stared at when your baby tosses her food across the room. Secondly you are always eating fries. Not that I don't love fries. I love fries. Who doesn't love fries? But sometimes you don't want to be obligated to eat fries. Also you don't have to eat what's on their plate or alternatively give them what's on yours. Because inevitably they are going to want chicken strips and then see your hamburger and change their mind completely. Deciding, suddenly, that being made to eat chicken is the worst thing in. the. world. It's a conspiracy to prevent you from enjoying your meal. Without kids? We spent no less than 2.5 hours eating dinner. Sometimes we were both just staring into space. It was quiet. So. Quiet. We ate our food. We did not share any of it. Also there might have been an entire bottle of wine consumed. No kids meant no one to put to bed but ourselves.

Oh sleeping. So much sleeping. Or if you're me you'll be up hourly wondering WHY you're sleeping and waiting for someone to have a bad dream/cry/need water/claw at you. But sleeping.

Having kids along means A. I am going to be scanning the TV for whatever the local PBS channel is. Immediately. B. We are going to be up and out of the room by 7:30 am. On a late day. C. There is no leisure. Kids don't DO leisure. Let's GO. We need to GO. When are we GOING?

Solo? The first day of our trip I stayed in my pajamas until 12. I typed without anyone touching the keyboard. I ate an almond croissant over the course of an hour. I drank my coffee. And I tasted it. It was good. I didn't want to leave the room. So I didn't. And no one cried. No one. I watched an episode of Downton Abbey. The whole episode. And I actually followed the whole plot. Weird.

But traveling-without-kids sex? Hotel sex? None of this applies. Not having to monitor volume means more than just a teeny tiny hum of pleasure. Go ahead. Moan. Yell, if you're so inclined. No one is listening. Well maybe the neighbor but you'll never see them again. It's not that I want to holler during sex, I just want to be able to. Also how about sex more than once? Yes. Twice even. All night even. Oh who am I kidding? There is no way we'd have the energy to have sex all night. One somewhat slightly prolonged, uninterrupted session is a luxury. We'll take it.

Now back to eating fries. And sharing beds. Until next time.