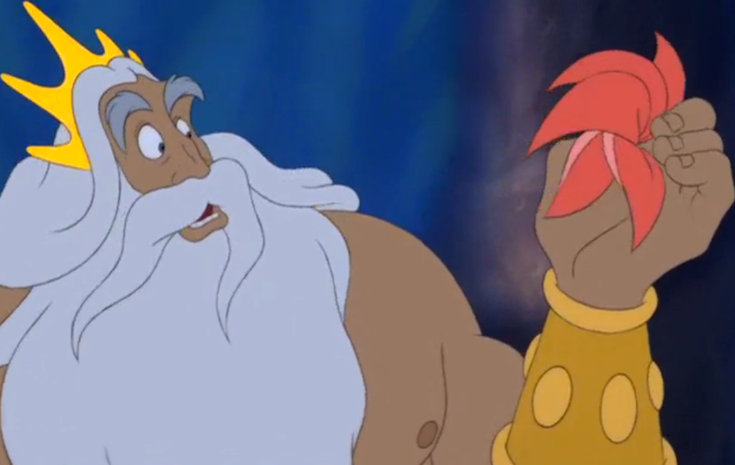 Remember being a kid, and just getting super-de-duper obsessed with something? Like many Millennial women, my "something" was none other than The Little Mermaid. Maybe it was the sea-shells, her voice that was like a "bell" or the monster-proof set of Little Mermaid curtains hung above my bed, but—in the depths of my chubby cheeked toddler heart—I legitimately thought Ariel and I were kindred spirits.

As an adult, I can't help but reflect on this bizarre—if societally popular—fixation. I've been wondering recently if, for me, it perhaps it wasn't Ariel's ineffable spunkiness that captivated me, but, rather, Ariel's relationship with her father, King Triton. While the film traces a more-than-rocky relationship between the two of them—"But Daddy I love him!"—King Triton goes on to support Ariel's headstrong ways.

In light of the film's 25th birthday, many critics have gone back to analyze Ariel herself. Many agree: for a 1989 animated movie, The Little Mermaid is surprisingly feminist.

Before we dive into all this, let's first address some problematic plot points in the film. The fact that Ariel is expected to woo a man sans vocal abilities is, um, more-than-troubling, as is her willingness to throw away her life for a dude with whom she's scarcely acquainted. But when considering this, it's important to remember that Ariel is a teenager. What dumb things did you do in the name of "love" at 16? If your answer is: smoke pot under a bridge with a skater boy who signed graffiti with his real name, we may just be soul sisters. The teenage brain be crazy; sadly, Ariel's erratic, self-destructive, impulsive behavior is pretty much dead-on.

Moving on. Let's talk a bit more about Ariel's feminist spirit. Incidentally the original story—courtesy of the ever-grim Hans Christian Andersen—was crafted in 1836. In case you were wondering, the world wasn't too keen on women's rights at that time. The Seneca Falls Convention on the subject was still 12 years off. It goes without saying, but women couldn't vote and were expected to remain in the domestic sphere.

In any case, Disney's portrayal of Ariel is a total 180 from the heroines that typified that era. Interestingly, creators on the Disney team made Ariel meek—like the original tale—but (in the interest of reducing characters in the film) cut a spunky dolphin out, and gave its feisty characteristics to Ariel instead. Oft overlooked however is the depiction of King Triton's persona, which, to me, is a powerful addition to The Little Mermaid's largely latent feminist rhetoric as well.

In the beginning of the film, Ariel flakes on an important performance because she's off collecting human treasures from a sunken ship and then heading to the surface to have it examined by a seagull. (Which, is of course, forbidden.) King Triton is pissed. Not because she's disobeyed necessarily, but because it's dangerous; fishermen want to spear a mer-bitch.

His anger here is eclipsed only by an absolutely manic moment later upon discovering Ariel's relatively creepy collection of hoarded human stuff. At this point, King Triton realizes the extent to which she has forged her own life, in secret and in absolute "disobedience" in his rules for keeping her safe. Not only can't he "control" his own daughter, but she also wants to be a different species, negating what he probably believes is at the crux of their connection and her identity.

While we (probably) will never experience this "who am I?!" crisis to this extreme, the desire to be something/someone else is often part and parcel to the teenage experience and the desire to renounce who are you can be offensive to the parent. How would you feel if your teen yearned to be a different ethnicity? Or culture? Or—gasp—an opposing political party? How does that feel for a parent, who has put heart and soul into raising this kid?

But, instead of dismissing Ariel's desires, King Triton contemplates the situation; when he hears that Ariel is in love, he ponders this with sincerity. (Although at this juncture he doesn't know it's with a human.) And when Ariel ultimately falls short of her deal with Ursula (and is morphed into one of those haunting, wormy looking things) he doesn't lord his fatherly advice over her, bellowing out a big "told ya so!" (which, in all fairness, would have been understandable). No, the man sacrifices himself and takes Ariel's place in Ursula's garden.

And in that moment? King Triton accepts Ariel's independence. Ariel isn't a little girl who needs to be punished—King Triton believes that his daughter will better serve the world outside Ursula's cave. And given all the shenanigans Ariel previously pulled, this is an impressive decision.

But perhaps it's the very end of the film that illuminates their relationship best. After Prince Eric defeats Ursula, King Triton bestows a fully human body to Ariel. He sacrifices his own happiness (after all she can't swim down to his kingdom without her gills y'all) to honor that she is a separate, independent individual capable of making her own life decisions. In short, this man recognizes a feisty, feminist, spirit in his daughter and fosters its growth.

I suppose this brings me back to my first point. In my own life, I see my father as this King Triton type. It can't be easy to raise two headstrong daughters, yet our independence and spirited natures were consistently encouraged. In honor of Ariel and every pint-size pending feminist out there, I wanna give a holler to all the fathers who aren't interested in their daughters being demure or dainty, but headstrong and hell-raising.

Now, if I could just find a sea-witch to swap out these pesky legs for some fins . . .