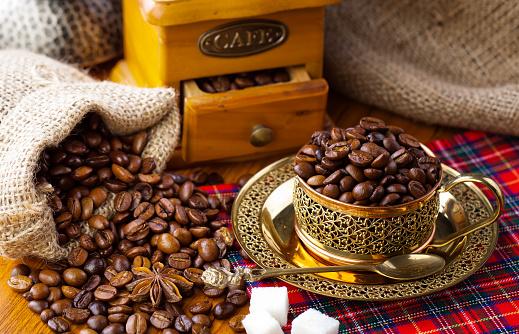 Entitled coffee, at its finest

Yesterday I had two errands, on top of my list of my usual Homeschooling-SAHM list of things to do:

My husband and I have a heap of children together, and when it came time to begin school, we threw in the towel of convention and we decided to homeschool them all. It isn’t a big leap for me, since I love teaching and actually enjoyed being a substitute teacher for public and private schools; teaching my own kids was a natural fit for me.

Besides the daily agenda of schoolwork, there are also meals to create, dishes to do, floors to sweep and laundry to . . . ignore (Who am I kidding? Laundry sucks.) I know there are special unicorns out there who receive an endorphin rush when they match socks. I am not this creature.

Yesterday I got a lot of writing done during the kids’ martial arts, which was fantastic. One of the kids played MineCraft on my phone while the other two were in class, and then the other two finished up their schoolwork while the one kid was in class. Win-win, all around.

After classes were over, we hopped in the car and headed over to Target for a new coffee pot.

See, we can’t keep a coffee pot as a long-term relationship option. It doesn’t matter what brand, style, warranty, store or even the barometric pressure. Our coffee pot will die.

The last episode of “MyCoffeePot & Me” aired 2 years ago when I woke up to an unresponsive pot. I tenderly serenaded its one button ("this is your purpose in liiiiiife!"). We had traveled over an hour to go to a specialty store to pick up this “guaranteed” coffee pot with “gravity drip system” (gravity, people). I was enormously displeased that it failed me; one among many others on a long list of coffee pots who have also failed me.

So, off we went to Target. I got a cheap, $19 purple coffee pot. It is going to break, most likely, because they all break, and at least I am only out $19. That’s like, 3 lattes. I figured it was a good deal. Plus, it was purple. 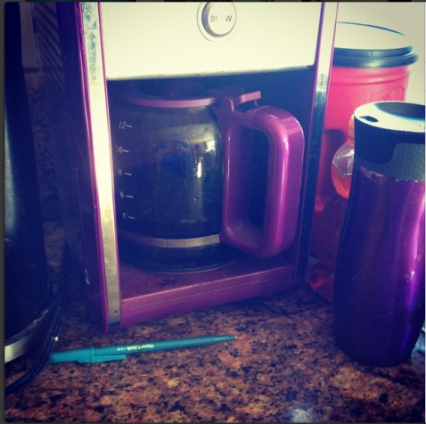 Yes, I took a picture of my purple coffee pot.

And Instagrammed it. Because.

Now, for context, we drink way more coffee than the average person.

As a SAHM, I know for a fact that I drink more than most SAHM's in America.

I just like coffee. Black coffee. A lot. Granted, over the years I have tried to cut down. I don’t need my heart skipping down the lane just because I have had too much coffee. So, two cups in the morning, sometimes three. One or two cups in the afternoon. Sometimes Irish Coffees at night. That isn’t unreasonable, I don’t think. It isn’t 10+ cups a day or anything (*cough* college *cough*)

Back to yesterday: After two years, the remarkable purple coffee pot finally broke. It is understandable, since they all leave us at some point. You never know when it will happen though, so you are never prepared for it when the time comes.

Yesterday, I filled the purple reservoir with purified water. I placed the basket of Folgers grinds into the basket, and I pushed its one button: START.

Now, this was—seriously—a basic coffee pot. It heated the water, it dripped the water and the carafe caught the dripping coffee. It had one button to start the process, and it was the same button to end the process. Uncomplicated. Unsophisticated. No challenges. It started and stopped. If we ignored it, it did nothing but the last request we asked of it (we may have left it on for over 12 hours a few times).

Though, yesterday, the pot may have turned the little white “ON” light, but it never heated the water. It never dripped over the grounds. It never dripped into the glass carafe. The lit “ON” button was a glowing white lie. The water just sat in the reservoir, and the coffee grounds sat in their basket. Never did the two meet.

I was stuck drinking Via all day.

Which, granted, is better than Folger’s Instant French Roast coffee. But it isn’t the same, and by the time I got to Target at 5 pm I was tired.

So tired, that I was walking through the parking lot of Target pushing a shopping cart, and I saw a car had their headlights on. I said, “Oh shoot, I forgot to turn mine on!" Then I actually reached to turn on the headlights of my cart.

It was nice to get home and brew a normal pot of coffee yesterday evening. I felt back to my normal self after a cup and a half in front of a fire. It was lovely.

This morning was quite different than yesterday morning.

I woke up to brewed coffee. Be still, my uncaffeinated heart.

You see, this new coffee pot has an “AUTO” button. And a clock. You can get these two things to work together, apparently, to brew coffee on demand. I am happy. So happy. Caffeinated tears of joy.

During the day, however, the coffee pot would turn itself off after 2 hours.

“Did you turn the pot off?”

“No, I thought you turned it off?”

“Dude, that is messed up. We didn’t ask it to turn off. It should ask us before it makes that decision!”

“I know! I wasn’t ready to be done with this pot yet. There is still 6 cups of coffee left in there, and now it is cold. This is plain manipulation of our coffee pot.”

“This is messed up.”

Friends, I learned about my entitled, jerk self today when I became upset and felt manipulated when my coffee pot chose to turn itself off without consulting me first.

I’m not sure what this says about me, exactly.

But I am giving my manipulative coffee pot the evil eye when it gets to about 8 cups now.

I might need to work on my control issues.

Oh, shut up and drink your coffee.