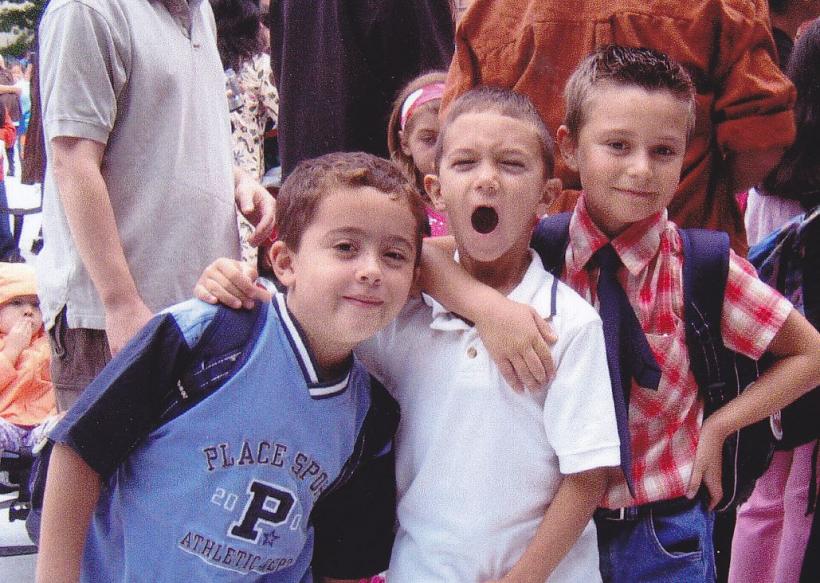 David with his taller friends

Why do I get so pissed off when people make stupid height-based comments to kids and their parents? Because you never know if there is actually a medical condition responsible. David was on A.D.H.D. medication since age eight. Ritalin and its cousins have been known to inhibit growth, one of the many reasons David lobbied to stop taking his meds when he hit his teens.

Even when I explained to my son that he came from a long line of short people, it didn’t help. David still felt bad about being small. How could a five-year-old possibly get this type of size-shaming message? From other people, it turns out — mostly insensitive adults. They gave him the idea that bigger was somehow better.

I’ve even heard of grown brothers and sisters who have running bets about whose kids will be taller. This takes sibling rivalry into a whole new intergenerational dimension, passing the short-shame gene onto their kids!

The worst part is when people speculate on David’s age based on his height. Dangerous territory — it’s like trying to guess a woman’s weight; it never has a happy ending. Estimating years by height is an equation that rarely works.

I’ll never forget how, outside of Paris Tabernacle in Idaho, the Mormon church elders grilled David: “What’s the name of your church?...Where is it?...How old are you?” When he told them he was eight, one responded, “Really? You’re awfully little for an eight-year-old.” I wanted to snap back at Church Lady that this was exactly the way God made him. Just like David was perfect in God’s eyes, he was perfect in mine, too. But I said nothing, just watched my child slink away like a wounded peacock.

Thoughtless comments like this silently give kids the message that they’re not good enough. You wouldn’t walk up to an adult and say, “Boy, are you fat!” Then why is it okay to say to a child, “You’re so small!” It is simply acceptable because they’re children and adults can supposedly say anything they want to them?

Kids know they’re on the diminutive side even more than everyone else does. The signs are everywhere. They’re always in the first row in school pictures. They can’t get onto height-based rides at the amusement park when most of their other friends can.

But slight stature does have perks. David didn’t have to pay on the subway until he was about seven-and-a-half — it goes by inches (44) and not by age. If people were going to assume David was younger than he was — like when we were getting museum admission tickets — I wasn’t going to correct them. Especially if it saved money.

Size stupidity doesn’t just end with people saying ridiculous things to the kids themselves. People actually look at the parents with judgment, as though we’re withholding food from them. Some parents have even been bold enough to suggest to me that David get hormone treatments.

It can drive parents batty. Anthony and Jean, who have a 12-inch height difference themselves, took their son to the pediatric endocrinologist several times before they were banished. “Look, there’s nothing wrong with Don,” they were told by the exasperated physician. “You’re six-foot, you’re five-foot. Don’s going to be somewhere between that.” In Don’s case, it wasn’t an issue of failure to thrive or hormonal deficiencies, just simple genetics. Now almost 16, he’s growing at a nice pace.

Why do I get so pissed off when people make stupid height-based comments to kids and their parents? Because you never know if there is actually a medical condition responsible. David was on ADHD medication at age eight. Ritalin and its cousins have been known to inhibit growth, one of the many reasons David lobbied to stop taking his meds when he hit his teens.

On the other end of the size spectrum, my friend Cindy endured countless lectures at the playground because of her son Colin’s largeness. Parents droned on about childhood obesity, Type 2 diabetes and the importance of diet. Meanwhile, Colin’s weight problem went deeper; it was caused by an inoperable brain tumor. While I would have ripped them a new asshole, I watched Cindy suffer in silence, politely listening to other parents’ harangues. “Colin’s medical history is none of their business,” she explained to me later.

It’s not okay to say thoughtless things to kids. Hurtful talk is never acceptable. We’re supposed to be their teachers. We’re supposed to demonstrate proper social cues by our deeds. A person’s height has no reflection on their worth as a human being, whether they’re young or old. Taller isn’t better, it’s just…taller.

Children’s feelings run deep and insensitive words leave a lasting imprint on them. Now 15 and 5' 6", David is on par with most of his peers height-wise, but he still perceives himself as being undersized. Try as I might, I haven’t found a way to help him see it any differently.

David has a healthy diet, and at his chubbiest (as an infant) was only in the 25th percentile. He has a strong immune system, rarely gets sick, and his pediatrician says he’s just fine. Again, simple genetics will probably dictate his ultimate height.

On my husband’s side, David’s great-grandfathers were nicknamed “Shorty” and “El Mas Corto” (The Shortest). One grandfather was only about 5' 4" (and poor Billy was a malnourished child during the Depression). My dad claimed to be five-nine, but was actually a bit shorter. My husband is a towering 5' 10" and I’m 5' 5". And David will probably be somewhere in between. It won’t make me love him any less!

People come in all shapes and sizes, and you know what? We’re all little wonders.

If you like this article, please share it! Your clicks keep us alive!
Tags
short
stature
Kids
parenting
stupid things people say