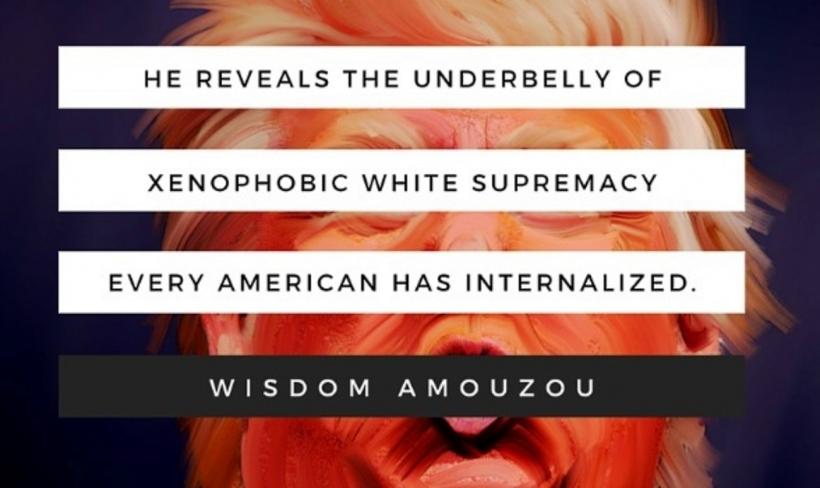 He makes it nearly impossible to not acknowledge American hypocrisy. Image: The Good Men Project.

Donald Drumpf (Trump) reveals the truth about America… in a way we can no longer pretend to ignore.

I am originally from Togo but I grew up in Colorado after immigrating to the States with my family when I was 9 years old.

As an insider-outsider, I have always existed in between multiple cultures. I am the African-American and the American-African. I’m caught in between the cracks. Some say the view is better. I say, it makes it difficult to escape the lies and contradictions. Malcolm X said, “you’re not supposed to be so blind with patriotism that you can’t face reality. Wrong is wrong, no matter who does it or says it.”

To survive as a black African immigrant, I never had the privilege to be so blind with patriotism that I could ignore the many contradictions of my America.

My America is the Supreme Court ruling removing all bans on same-sex marriage on June 26, 2015. My America is the father of the gunman responsible for the largest mass shooting in American history, proclaiming “Gays should be punished by God,” nearly a year later.

My America is the cop who pulled me over, as a 12 year old lost boy, walking home alone in the dark of night and gave me directions to find my way home. My America is the other cop who pulled over that same boy, now a 19 year old Chemical Engineering student, and illegally searched him, his brother and cousin because 30 minutes ago a pizza delivery man was robbed in the neighborhood they were passing through.

My America is the cop who tackled my soccer teammate, a fellow African immigrant, for choking the white rich counterpart on the opposing team who called him a nigger throughout the entire game. My America is my teammate spending the night in jail and the counterpart at home with his family. My America is the disempowering shame that my teammates had to swallow and the entitlement and silent guilt their team drove away with.

My America is folks pointing to the symbol of Obama and asking us to forget the Tulsa race riots of 1921. My America is the noose that was found hanging on a tree next to John Mabee Hall at the University of Tulsa last summer.

My America is the beauty of students in my high school district, Aurora Public Schools, speaking more than 133 languages. My America is the guy who said my hometown, Aurora, was the Anus of Colorado because of all the immigrants who live there.

My America is the number of white men making millions from the booming legal and recreational marijuana industry in Colorado and Washington. My America is the millions of poor black men and women rotting in prison for the failed war on drugs.

My America is well-meaning folk with well-meaning liberal arts college degrees who post well-meaning articles on Facebook about the plight of the poor while still contributing to the gentrification of their neighborhoods.

My America is those same well-meaning folks who have few relations with African-Americans on their continent but still find themselves equipped to fly to exotic locations in Africa to solve those exotic problems for those exotic “natives.” (Courtney Martin calls it the reductive seduction of other people’s problems)

My America is Obama lecturing African leaders about corruption and long terms. My America is the Bush and Clinton political dynasties. My America is nearly half of this country willing to vote Donald Drumpf into office.

You want to know why I really love the Donald? He actually makes me feel a bit more sane. He makes it nearly impossible to not acknowledge American hypocrisy.

The danger of submitting to the false patriotic tranquility of the United States of Amnesia is Donald Drumpf. He reminds us that the United States of Amnesia is one of the most peacefully violent countries in existence, not only politically, but economically, socially, psychologically, and spiritually. It’s in a constant state of hypocrisy — that dance between reality and idealism, democracy and corruption, love and indifference, revolution and tranquility. Of course, Drumpf is the logical reaction from a significant population of this country to the minute symbolism of 8 years of a black family in the White House.

You want to know why I really love the Donald?

He actually makes me feel a bit more sane. He makes it nearly impossible to not acknowledge American hypocrisy. He brings to the forefront an authentic truth. It’s an ignorant and ridiculously violent truth, but nonetheless, it is the perspective from which nearly half of this country operates from. For some of us, there is nothing more quintessentially American than the violence Drumpf inspires. If you’re still not able to empathize, you have to understand what America has done to most of the heroes I looked up to. They were incarcerated or assassinated, promptly Disney-fied and spoon-fed to me as holidays.

Drumpf’s hateful rhetoric and honest answers reveal the underbelly of xenophobic white supremacy that every American (regardless of color) has internalized. His calls of violence affirm what every 2nd class citizen in this country fears and reminds us just how disposable our bodies are to the system. Most importantly, his millions of followers and voters remind us that America’s colonization of indigenous, queer, African, and Latinx people never ended. It’s indeed an active state of violence and the need for collective transformative resistance has never been greater.

In my America, resistance has never been a luxury.

It was and still remains the only way to make sense of the contradictions and the only means of our survival.

Can The 'Angry Black Guy' Have White Friends?
Wisdom Amouzou

Contradictions In The United States Of Amnesia: Why A Black Man Can Love Donald Drumpf
Wisdom Amouzou