How Dating Girls Changed My Perspective On My Own Femininity 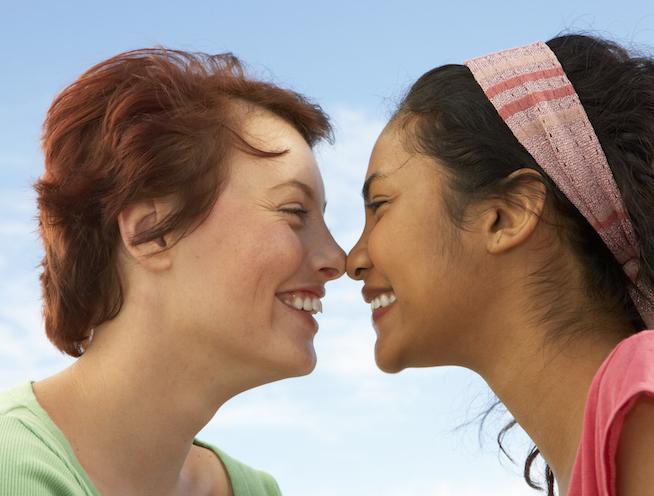 If my identity wasn’t linear, and if it didn’t follow the anticipated, stereotypical steps, was I just as real and queer as everyone else?

Back when I was a straight girl, I did the makeup thing.

In high school, I spent my evenings doing homework and watching other women show me how to apply bronzer and smudge eyeliner. I became good at it, and I spent the money I made at my afterschool job on $20 mascara and $40 foundations.

But it wasn’t that I loved makeup. For me, makeup was about one thing and one thing only: looking pretty enough for boys to like me.

I knew what it took to attract boys. Years of reading beauty magazines eased me into my gender role, and paying attention to which girls were getting dates — and which girls weren’t — prepared me to play the part.

One of the most important parts of my beauty routines was my hair: I’m biracial, half-Black, half-White, with long, thick, and kinky-curly hair. But my hair was always, always, straight... when I was straight.

In my world, true femininity meant straight hair. It was a thing that adult women did, and I wanted to be mature. It needed to be done, and I wasn’t done until it was. Without sleek and shiny relaxed, hot-combed, and flat-ironed hair, I may as well have not bothered with any makeup at all. What boy would ever find my natural hair attractive?

I did well as a straight girl. I fit in as the mixed girl with long hair and a big butt. I slid easily into that role, and dated the sorts of boys who’d always imagined a girl from a music video on their arm. White boys dated me because it made them feel rebellious; Black boys dated me because I wasn’t too Black to be feminine. Both dated me as a foray into the exotic.

I dated some of them because I liked them, and others because I thought I was supposed to. I played my part.

In college, I wasn’t interested in any of the boys — they weren’t my type — so I stopped obsessing over makeup. I felt more whole, more real and less like a well-decorated façade.

I was told I was a femme, so I became one. It was just another role.

As I realized I wanted her to like me, I slipped back into my old routine — my makeup got more advanced and my hair was always straightened. I still thought that to be attractive, I had to be as feminine as possible. I’d been a hardcore ally for a decade at that point, but had no idea about the politics of beauty within the queer community; I thought I was stepping back into my old role.

It was something I couldn’t think my way out of. My queerness at that point was more like confused curiosity; it wasn’t something I publicly claimed. I told only my closest friends. I still didn’t know what it meant for me. I was told I was a femme, so I became one. It was just another role.

It wasn’t until my second relationship with a girl that I realized what my queerness felt like. There was something about this relationship that was different. Maybe it was that we were breaking relationship norms simply by being in a queer relationship. Maybe it was just her complete disinterest in conforming to any butch/femme dichotomy, as well as her aversion to being labeled and stuck in neat little categories.

Not long ago I asked if she missed the version of me that was all femininity all the time — the little black skirts, the lipstick and the side-parted, glossy hair.

She shook her head and said I was perfect either way.

I don’t want to say that I needed permission to be myself, but I think a part of me did. No one ever told me that I was OK to the queer standard of beauty.

In some ways, I’d felt like it was my job to be good at being a girl. After all, I always had been. How could I go from a boy-obsessed straight girl in mini skirts and Uggs to joggers, loose tanks, and no bra — but also sometimes dresses? If my identity wasn’t linear, and if it didn’t follow the anticipated, stereotypical steps, was I just as real and as queer as everyone else?

The older I get, the more I realize femininity is empowering for some people, but generally isn’t empowering for me. It often feels suffocating, like trying to become something I’m not. I completely respect people who feel like layering on makeup and slipping on heels if it makes them feel good, but, for me, I always feel most authentic when the day comes to an end and I wipe the slate clean. In the same way that standing bare-footed in the dirt makes me feel rooted, seeing myself without anything added on makes me feel closer to myself.

And it’s not a matter of either/or — it’s a matter of both, and beyond. Femininity may empower some, but suffocate others. In the same way that gender doesn’t function as a binary, gender and sexual expression don't either. And that’s OK.

Something doesn’t have to be easy-to-label to be real.

For me, being queer is about challenging those labels and categories. It’s about having the right to discover what works for us — not society.

And regardless of sexual, romantic, or gender orientation, we all should have the freedom to be able to change it up at any moment, without feeling any less of what and who we are.

If you like this article, please share it! Your clicks keep us alive!
Tags
gender
queer
LGBTQ
gender roles
femininity
Relationships