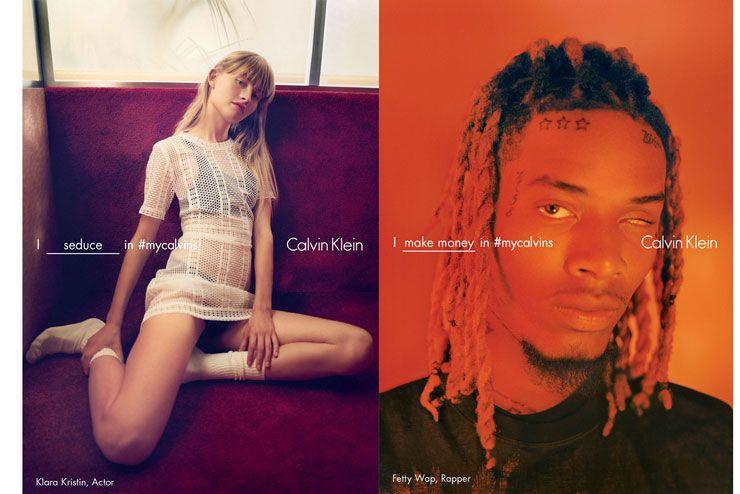 “It’s amazing that it was put up in the first place. I was pretty shocked.”

Calvin Klein has a reputation for pushing the envelope that goes all the way back to 1981, when he juxtaposed a 15-year-old Brooke Shields with the tag line, “You want to know what comes between me and my Calvins? Nothing.”

Eleven years later, he featured 17-year-old Kate Moss topless, astride Mark Wahlberg. There have been many objections to this and other ads that appear to mimic child pornography and sexual violence. For instance, in 2010, the model Lara Stone appeared in a photographic tableau that approximated imagery of a woman being assaulted by two men, with a third man casually sitting and smoking a cigarette.

Celebrities have always been part of Klein’s strategy. He has used the advent of social media to pump up his branding — most recently to drive eyeballs to the #myCalvins campaign.

However, his latest foray has hit a snag. Big time.

Side-by-side on a huge wall in SoHo, New York City, are two separate photos from Klein’s 2016 spring marketing promotion: “I (blank) in #myCalvins.”

A head shot of rapper Fetty Wap reads, “I make money in #myCalvins.” Next to it, Klara Kristin, an actor in the film Love chose the statement, “I seduce in #myCalvins.” Reading about Love, her word selection seems calculated to expand upon the blatantly sexual nature of her role in that movie. She is pictured with her legs spread, her crotch in shadows. The ankle socks add to the aura of an underage, little-girl demeanor.

From the other photos I looked at, not all the other female participants chose that route. FKA Twigs, singer/songwriter, picked the phrase, “I excel in #myCalvins.”

Why did the Klein PR team match up those two specific ads? That's anybody’s guess.

Regardless, it backfired. A push-back move was initiated by Heidi Zak, the CEO and co-founder of ThirdLove, a lingerie company that focuses on providing women with properly-fitting bras — often through half-sizes.

Zak has plenty of experience in retail, including marketing at Google. She has a degree in economics from Duke University and an MBA from MIT Sloan, which positioned her well to take on Klein’s executive team. Zak used a three-pronged attack: a personal letter demanding that the billboard be taken down, a Change.org petition, and an on-the-street video, More Than My Underwear (accompanied by the Twitter campaign #MoreThanMyUnderwear).

In her letter to CEO Steve Shiffman, Zak pointed out, “You and I view the world very differently. I believe women can do anything, and that we should take every possible opportunity to teach and remind them of that. Anything less, in this day and age, is irresponsible marketing.”

The billboard has since been removed. However, Klein insisted in a statement to The Hollywood Reporter that the decision had nothing to do with Zak’s initiative. Rather, the release stated, “This billboard was taken down overnight as part of the planned rotation of our spring 2016 advertising campaign.” The comments continued with a reference to the company’s desire to take “all of [their] consumers' concerns seriously.” Presumably, they didn’t watch the video, where one woman interviewed noted, “It’s terrible. And it’s offensive. I’m not happy about it and I won’t give Calvin Klein my money.”

I spoke with Zak by telephone to drill down on her points and her reaction to Klein's claim that the removal had nothing to do with her campaigns. “I think it’s great that the ad is down, regardless of what part we had to play,” she said. “I’m glad that it happened so quickly.”

“For us,” Zak said, “we really focus on how a woman should feel in her bra. We have a different brand promise and mission.” Part of that includes the donation of product to organizations like Dress for Success.

“Millennials care more about what a company says and does,” Zak emphasized. “This kind of billboard is not what we want to show young women.” She added, somewhat incredulously, “It’s amazing that it was put up in the first place. I was pretty shocked.”