As My Fifth Child Turns Five 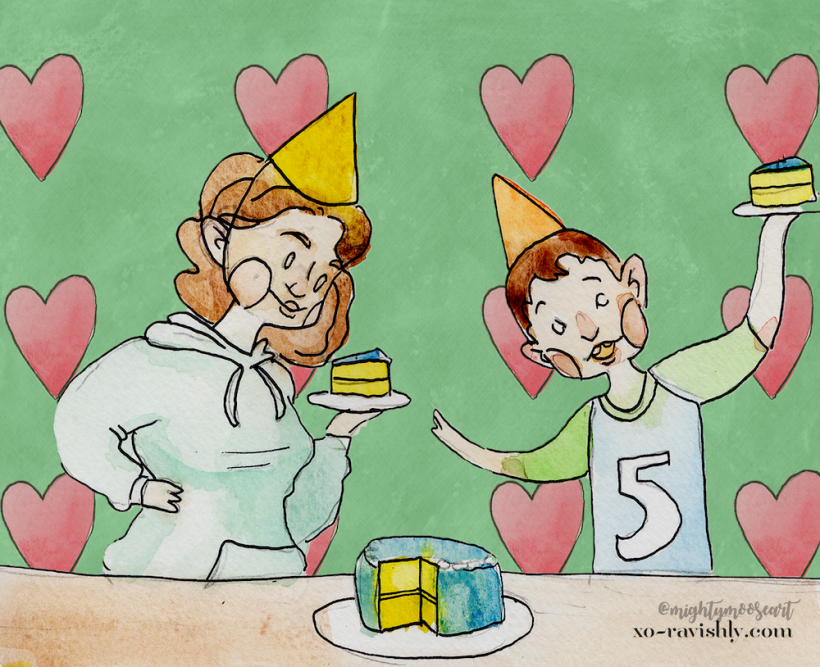 Max (interrupting, again): ...he died of oral cancer which is cancer in your mouth. So yeah, he's dead.

(In case you were wondering why you haven’t seen a new title from the Doc since Oh The Places You’ll Go, it’s because he’s dead. Max told me so.)

My first baby turned five in the year 2000. We lived in a mid-century house then, with one tiny bathroom, a stove that had a poorly (and rarely) functioning temperature gauge, and no air conditioning, in the part of California that’s less Hollywood-Glamour, more Festering-Pile-Of-Cow-Manure-In-The-Desert.

I was thin and unmedicated then, riding peaks of mania, sinking into gullies of depression. I lived in a body that I loathed — one much smaller, much firmer, much younger than the one I live in now. At 26, I thought I had my childhood tidily packaged, my future mapped.

That’s the kind of stuff you think when you’re 26 and married with two toddlers and a baby on the way.

The fifth birthday is a big deal. Five is kindergarten. It is reading and writing and riding your bike without training wheels. Five is the first milestone after the first birthday.

Kelsey’s number five birthday was pulled-off with some Pinterest-level mania — even before there was Pinterest. Her party was an ocean-themed BBQ, with two cakes (one in the shape of a goldfish, one a fully-detailed undersea landscape, complete with a tiny frosted boat resting on the waves), Pin-The-Tale-On-The-Whale, a piñata (that I MADE BY HAND) full of Blow Pops, a slip-n-slide, and five gallons of ice cream. I exhausted myself (did I mention I was pregnant with my third child?) for two hours with screaming five-year-olds and an enormous mess. In August. With no AC.

I didn’t know what “crumb-coating” was back then, so the goldfish cake, which was a dissected round cake rearranged, took two attempts and a more than brief period of hysteria (including my eventual weeping on the linoleum).

A crumb coat is the base coat of icing on a cake. It is also referred to as dirty icing a cake.

It’s also sometimes referred to as “Hey, idiot. You should have bought a cake at Costco.”

I apparently also did not understand the principles of expansion and contraction, because the first piñata attempt actually imploded while drying in the summer heat.

The whole thing was a mystical, magical nightmare.

Today, Max, my littlest baby, the last of the bunch, is five. Max will have a homemade chocolate cake, thrown together between meetings, with Hot Wheels perched on hastily-dolloped pillows of buttercream. There won’t be a piñata or 25 kids tromping muddy feet across our hardwood. There won’t be two cakes or Pin-The-Tale-On-Anything.

By my own standards, this is a lazy celebration, one I excuse with militance, Capitalism! Greed! Mollycoddling! But mostly, I’m just tired. 42 is not 26. The space between 26 and 42 is full of frustration and fear, weighed down with the ideas of buying a house and sending kids to college, and crushed by hasty decision making.

The space of 16 years makes you an entirely different person.

Since Kelsey turned five, I’ve learned that little kids don’t really remember their birthdays enough to make a huge spectacle. Also, kids already have too much crap, and a party is another opportunity to purchase/receive more crap. Exhausting yourself into a full emotional breakdown over a pinata isn’t beneficial to anyone.

I’ve also learned that the body you love to loathe in your 20s, will be the body you loathe when you’re in your 40s. You’ll probably have more things to loathe about it then — more stretch marks, more fat, more gravity — but the loathing will feel pretty much the same. You’ll wish you could go back to 20 something you and tell her to enjoy the body she’s got.

I’ve learned that parties are overrated and loathing your body is a waste of precious time.

I know that day is still 13 years away — and that 13 years is gone in the blink of an eye. I learned that from my big kids —  two in college, one about to finish high school. One day you’re singing Sweet Baby James to your first child...

...the next day you’re singing it to your last.

One day you’re young, then suddenly you’re the age you used to think was really old.

One day you’re a mother of one tiny baby, then suddenly you’re the mother of five kids.

One day you realize that they’ve grown up, and so have you.

Kelsey turned me from narcissistic child to ill-equipped mother. She changed my body from waify teen to stretch-marked woman.

And Max turned the ill-equipped mother into one who knows that being ill-equipped is a universal experience shared by everyone trying to raise kids that aren’t sociopaths. He took a stretch-marked woman and turned her into one who has relaxed into the body that occupies space and defies beauty.

I’ve learned something from every one of my children and the challenges and joys that being their mother brought me. I’ve learned a lot about people, and even more about myself.

Kelsey taught me that I could love something more than myself and Max has shown me that love is limitless, including the love we owe ourselves.

If you like this article, please share it! Your clicks keep us alive!
Tags
Beyond Before & After
BBA
BB&A
parenting
body image
Body Positive