My Schizophrenic Grandmother’s Footprints Are Just My Size 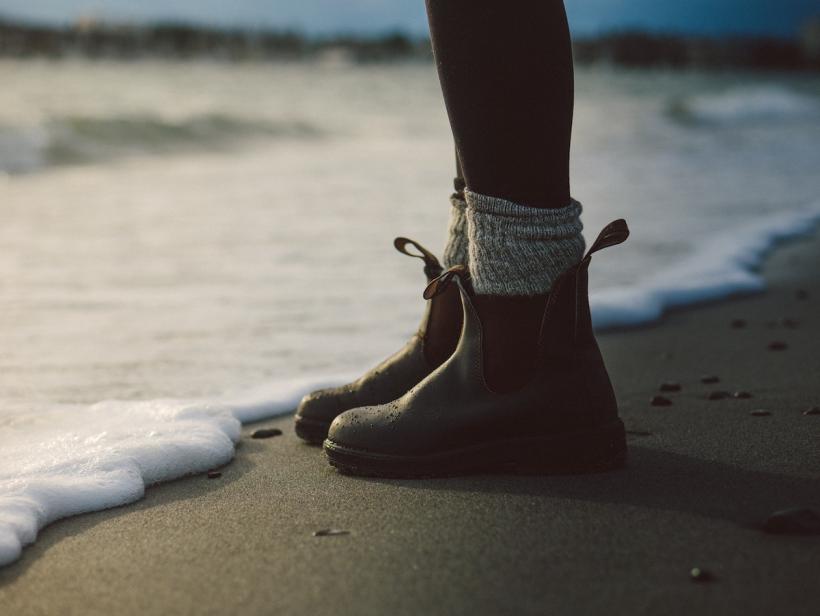 When she was alive, I did all I could to avoid comparing myself to my Nana. This was despite everyone in the family claiming I was a replica — not just in physical ways, but in spiritual ways too — which only made my tie to her even stronger.

I resented this because, well, we were all afraid of Nana.

What’s worse is that we used her mental illness as a sort of identifying marker that left little room for her to be anything else but schizophrenic to us. And we didn’t take the time to get to know her, either, beyond her diagnosis. This would end up being my biggest regret when reflecting on my relationship with Nana, a regret so big that it embraced all madwomen.

When anyone talked about her gene being passed down, they all pointed fingers at me: the disheveled, eccentric teenager writing poetry for hours, piercing her flesh, spiraling. Not once did they examine what such finger-pointing could do to a young, impressionable thing. How all the fingers began to stab me and even before any onset, I felt as though dying. No matter, really, in the end. I took their fingers and turned them into branches that lead me to trees to which I prayed. I found my own magic and madness in designing a life that resembled hers rather than one of the masses, those too scared to go down any rabbit hole or climb any tree replicas made of human bodies.

And in these assumptions, we failed. In superimposing a mental illness on me, we were identifying not just genetic splicing or chemical imbalances, we were baptizing the untamable. Something that said I should be ready to hold my breath, go under, and maybe never come up again.

In many ways, I was Nana. I didn’t have a label and was never diagnosed — nor did I have residual electricity charges or burnt umber bottles in the bottom of my purse, but I had that special something. And through the bottom of the purse, if I dig deep enough, I find a piece of black licorice rope with which I hang so many notions and selves. Bothered not by the hanging bits — for they don’t hang to die, but rather dry out, feel parched — only to come back alive through tears we never shared together, through a spiritual baptism both planned and unplanned.

We called Nana schizophrenic the way one might call the sky blue.

So casual the mention of her mental illness that one might have mistaken it for a seasonal cold — something that one catches, no big deal. Achoo and bless you because you just came back from life. Our visits to Nana felt like all year long she was a sneeze we never caught. Yet once in her presence, the sneezing never subsided. When my siblings sneezed, they called it allergies. When I sneezed, they said nothing — just peeked up at me from bowed heads.

Despite fear, despite the unknown, she felt far more familiar to me than anyone else in the family.

I had become utterly obsessed with the idea that the gene could ignite at any moment within my own body. As if the gene had preconceived notions or could sense a budding anti-establishment humor in me; as if I had already been fitted for the gene and the title to match, heavy indeed and without much say in the matter. No need to try it on, the measurements were accurate — a perfect fit, really.

The universe makes no mistakes; it does not lie; it gives us what we can handle. That’s what it felt like. And then I panicked — I felt a wave of what Nana must have felt the first time they took her away. Or when they strapped her down to the metal gurney and put a retainer in her mouth, perhaps even a wooden bit — for if I didn’t know better, I’d swear she was born in the year of the horse. Or is that me, is it the sum of our birth years divided and multiplied? It was like going down a corridor into some unknown place, some nameless place. It was dragging our feet behind us.

How could I tell my family that the word schizophrenia scared the hell out of me? How could I maneuver in and around that situation as a young child? Even the adults weren’t sure how to approach the topic. My dad just as afraid to admit all the things he had seen growing up — all the visits to the mental institutions, the whispers of the electric shock therapy seething from her body, the same body that had once housed babies.

Fearing her was fearing myself, and neither would get me far.

He told me once, after having been displaced yet again among distant relatives, that during one visit she was found sitting alone and drooling onto her shirt collar. Her eyes were full of someone else’s spirit and she didn’t respond to the word “mother” as she had before. Some things you don’t forget and some things you don’t come back from, he said — I’m paraphrasing, of course.

She was a wall-talker. And on several occasions got so carried away that she began screaming. Neighbors, equally terrified as we were, called the cops. When they came, they found a woman clean of drink and drug, yet under some spell, in an altered state. They knew something wasn’t right.

And when my screaming against life started, I, too, knew something wasn’t right.

It was the fighting against and then the being buried under. When my voice goes all loud and distant from my mouth, I become a conjuring of ancestral howls, of uncontrollable women, of women abused and crying.

I’m always struck by all the voices she heard, the voices that everyone knew she heard — and how little is known about them. Maybe her children were too young to even consider such questions, but why didn’t anyone ask her who she was talking to behind or between those walls? Who was it inside her head, what was provoking her? Perhaps her children were afraid to ask because they had heard the voices, too. Perhaps they were already aware that they were more like her than they wanted to admit.

By the time my father had gone away to college, Nana was granted an apartment by the state and given an allowance. She used the majority of her welfare on sweets and hair dye; she adored Woolworths when it was still in business. And the fact that I can recall so many details, like a dancing bear sweater for me and a bowling sweater for my brother, all her Valentine’s Day cards she sent every year, her jars of black licorice candies, her reserve of stolen coffee creamers, the slipping on of her custard-colored high heels, and touching her faux fur — all indicate one thing: I loved my Nana dearly. Despite fear, despite the unknown, she felt far more familiar to me than anyone else in the family. We were like long lost twins who, after being separated for decades, stumble upon each other by chance and realize the mirror, the reflection — and breathe a sigh of relief from years of being both lost and bound.

When I realized at the age of 12 that her shoes nearly fit me, I could sense myself growing into something everyone had already said I was. The brewing wasn’t a result of their desires, rather of my very own. Fearing her was fearing myself, and neither would get me far.

How could I reconcile their fears with my own? Their abuse of the mental illness itself, as concept, as well as genuine lack of recognition — with my curiosity of it? My unwillingness to engage in conversations, but siding with my Nana all along by branding myself into a version of her?

I am seven. I study her toiletries behind a locked bathroom door, wonder about the voices not just inside the walls, but down the drains, too. I could easily slip down the drain, she says.

Did she mean that or did she mean to say down the stairs or in the tub or on the floor? No one knows because no one asks.

My young girl self feeling all the guilt a young girl’s heart could bear. But more than word confusion or faux pas, her statement is prophetic and says more about her mental state than any of us realize. When I finally understand the power of her words, I steal them, write something resembling poetry, call it my own. I write with her bones, sitting at an imaginary desk and letting a cream-colored stiletto dangle from a toe that seemed to be twitching or tensing or twisted.

I Have Paranoid Schizophrenia, And It's Nothing Like What You See On TV

Am I Only Successful Because Of My Schizophrenia?

If you like this article, please share it! Your clicks keep us alive!
Tags
schizophrenia
mental illness
family
mental health stigma
paranoid schizophrenia

My Schizophrenic Grandmother’s Footprints Are Just My Size
Jacklyn Janeksela