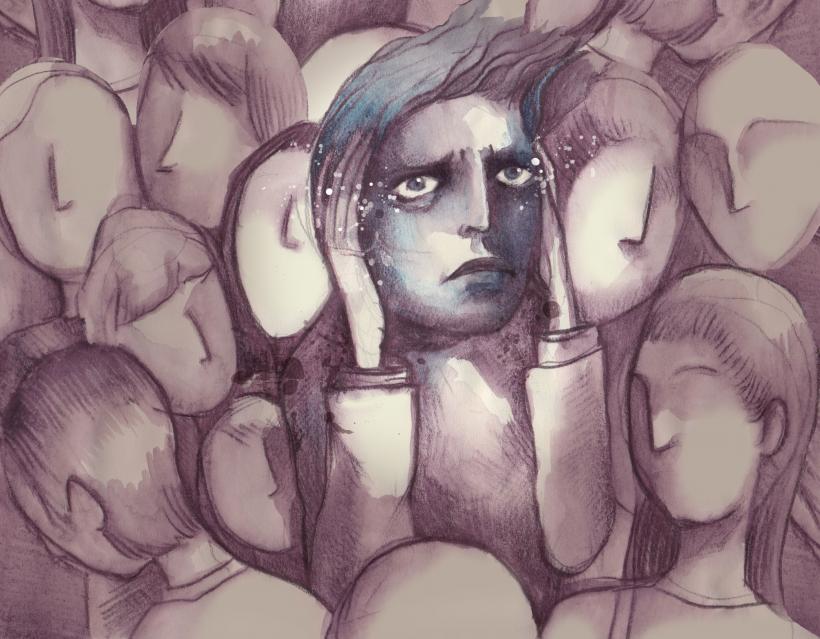 It’s no secret that many LGBTQ people struggle with mental health issues, but some struggle more than others.

For example, a 2011 study shows that out of 33% of LGBT students surveyed that reported suicidal ideation during the previous year, 44% of them were bisexual. Other studies have similar results, and they all suggest bisexual invisibility is the underlying cause. Indeed in my own experience as a bisexual, being caught in the middle of the binary of straight and gay often made me feel like I wasn’t queer enough for the LGBTQ community and not straight enough for the heterosexual world, leaving me feel lost in space in the end.

Recent studies reveal being in the middle of the gender binary isn’t any better. A 2017 study, for example, surveyed over 900 trans youth (ages 14 to 25) and found that non-binary participants reported struggling with mental illness more than binary trans participants. As the study authors speculate, “This group [non-binary youth] is likely to be less understood and acknowledged than transgender youth whose gender identity fits into the man/woman binary, and this may mean nonbinary youth are less likely to have social support.” Another study from last year, conducted by Transgender Europe, found similar results; specifically, that twice as many non-binary people reported struggling with mental health problems as binary trans people.

I asked my non-binary Facebook friends about their experiences with non-binary invisibility. Some, like Ingrid, said their transition would have been a lot easier if they had more support.

“I was unable to parse what I needed,” they say, “until I was ‘trans enough’ to be comfortable as a woman, then I could explore further. I’ve had people shout me down in real life.”

Kae has had similar experiences. “In some trans only spaces I've even felt invalidated by extreme ‘truscum’ women who go by the autogynephilia theory,” they say, “and that you can only be truly trans if you absolutely suffer being in any way or shape born with a penis.”

Ariel, on the other hand, sees more non-binary erasure in the cis straight world than in the LGBTQ community. “There is a framework of identity for trans men and trans women that just isn’t there for non-binary folks,” they say, “because our society encourages and models binary genders, and discourages ambiguity and gender fluidity.”

“There are definitely unique struggles in being non-binary,” says gender therapist Dara Hoffman-Fox, “although I wouldn’t say they are necessarily worse than those who are binary — more so different.” Hoffman-Fox, author of the book You and Your Gender Identity: A Guide to Discovery, says that while many people feel liberated at first when discovering non-binary genders exist, they often have trouble fitting into a gender binary world. “This resistance can be conveyed as confusion, uncertainty, and discomfort toward the people who are having this experience,” Hoffman-Fox says. “It can also result in a refusal to acknowledge their existence, as well as expressions of disrespect and disdain.”

My friends all agree that this struggle for validation as non-binary people has taken a huge toll on their mental health.

“I feel pretty socially anxious in situations where people use gendered terms to describe me without asking my pronouns,” Mel says, “and I battle with dysphoria and frustration with myself for being so sensitive when so many people are completely unaware and don't know how hurtful that kind of language can be. I can't expect people to mind-read and know how I identify, but being called ‘miss" or "ma'am’ can shake me up depending on what kind of day I'm having.”

I’ve previously written about my own struggle for validation, so I won’t repeat the story here. However, it’s both comforting and disturbing knowing that my experiences trying to navigate a binary world as a non-binary person are not unique. It’s comforting because I know that I’m not alone, and disturbing because despite all the progress we’ve made, we still have a long way to go. Fortunately, there are ways to fight non-binary invisibility.

For starters, mental health providers can do a lot simply by rethinking language. “Take note as to how you might be using gendered language,” Hoffman-Fox says, “and creating gendered options and change these to more gender-neutral choices (for instance ‘folks’ instead of ‘sir” or “ma’am,’ gender neutral restrooms, not using ‘male or female’ boxes on forms). Create opportunities for non-binary persons to share with you how they want to be addressed, as each individual will have their own way of wanting to do so. Remember to exhibit patience as well. Language and concepts around being non-binary are still in their infancy stage, so a person who is non-binary might go through a variety of pronouns, names, and descriptions of their gender before landing on one that feels right to them.”

Mel agrees with Hoffman-Fox’s tips on language. “I personally think society can be more inclusive of gender identities outside of the gender binary,” they say, “and recognize that not every person fits comfortably into one of two boxes. Also, using gendered language has become outdated, and we need to have more awareness as a society to allow for more conversations regarding pronouns and not saying ‘ma'am’ or ‘sir’ and instead using gender-neutral terms, like ‘folks’ and ‘people.’ It starts with little steps like that to create a more welcoming environment for non-binary individuals, but I suppose that simply spreading more awareness and having honest dialogues as frequently as possible can be a catalyst for positive change.”

When I asked Kae what people can do to better support non-binary people, they said, “Actually listening to us instead of assuming we are all these hyper aggressive people that go from calm to super angry in the drop of a hat for misgendering us, or us being totally rude and wanting to kill all cis people. Get to know us and why we say the things we do, you know?”

“Gender is fun when you have the ability to play around with it,” says Ariel. “Performing masculinity and femininity is great when you have the freedom to pick and choose what feels comfortable & right for you, without pressure from existing narratives of what you ‘should’ be."

"We have a long way to go before we get to that point, though.”

If you like this article, please share it! Your clicks keep us alive!
Tags
non-binary
Non-Binary Invisibility
mental health
gender