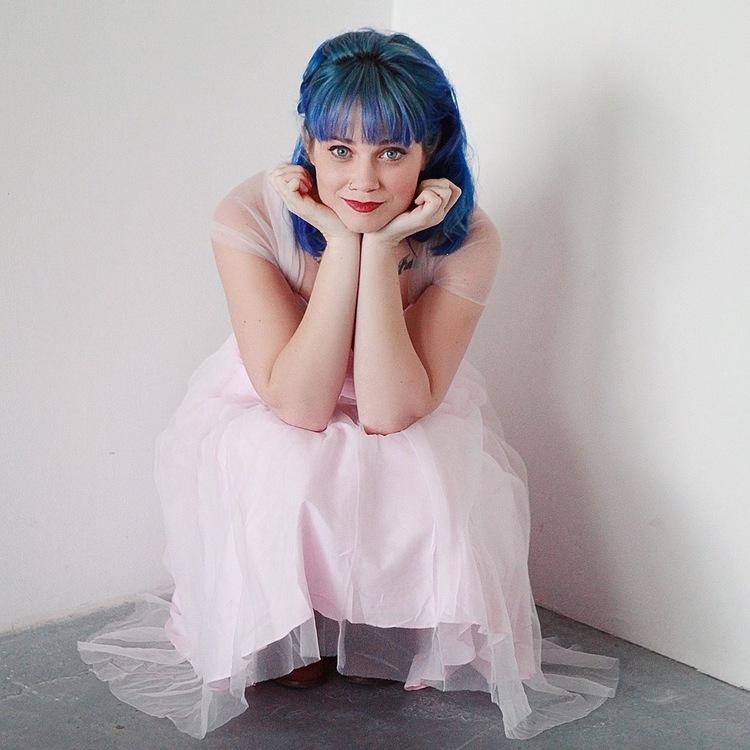 When you meet Natalie Meagan for the first time, the conversation is likely to go something like this: “Hi I’m Natalie, when’s the last time you cried?” Since starting intersectional collective and merchandise company “The Crybaby Club” in 2016, Meagan has always aimed to fight the stigmas associated with emotions, mental illness and health. As a sensitive child herself, she would spend her childhood days shielding her tears high up in countryside trees, where she would be able to escape just for a quick moment.

Now, the 30 year old completely self taught crybaby isn’t shielding those tears anymore, and doesn’t want you to either.

Instead, she proudly displays that emotional side by sporting one of the company’s enamel pins that lets everyone know she may be crying, but she’s sure as hell still getting work done.

As a sensitive-souled Pisces, Meagan’s message behind normalizing emotions is one that I find of immense importance. While talking to Meagan, I asked her about the creation of The Crybaby Club, her reasoning behind the stigmas surrounding emotions, and how she uses all of this to break down the barriers in raising her two little boys.

Note: no tears were shed in the making of this interview. 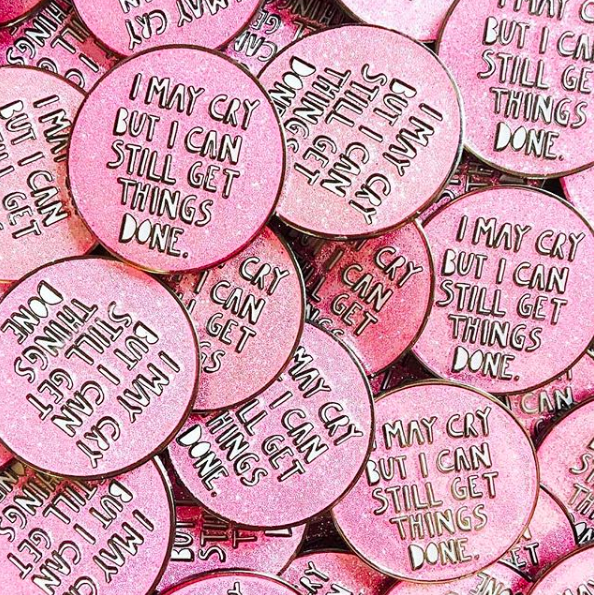 So there has to be a story behind what sparked the idea to form the Crybaby Club.

There is, and it’s my favorite story to tell because it happened by total accident. I went to drop off my kids at school one day and all the moms were handing each other their business cards, I guess so they could meet up later. Well, I didn’t have one because I basically wasn’t doing anything and ended up getting really emotional about it. So I got home and I was still upset and crying and just started wondering what my business card would say? ‘I cry all the time, call me?’ But then I thought that was cute, so I ended up making myself one by just drawing it on watercolor paper that was a size of a business card; it said “Crybaby Club” on the front and “Why don’t you cry about it?” on the back.

Then I posted it on Instagram asking if anyone wanted to join my club and five people wanted a card, so I sent them, and then the people on their feeds wanted one and it just snowballed to the point where I couldn’t hand draw them anymore — I had to print them. Then I realized that this could maybe be something when people were sending me emails about how much it mattered to them and helped them just having that little card in their wallet. So that’s how it started. It was completely by accident. I thought the joke was only funny to me because most of my jokes are only funny to me. The whole thing happened because I felt like I wasn’t doing anything with my life, so it’s all very ironic. It really took me by surprise.

It really started just as a collective — did you ever expect to unveil merchandise?

Absolutely not. I thought it was just going to be an online community where people can talk about the last time they cried or what they're really stressed out about and have a network of really sensitive people to talk to. I had no background in any of the merchandising stuff, so I had to figure out how to make pins and do all of that. It was the people who asked for it so the demand was there, I just had to learn how to supply it. When it started to really become a business with merchandise and stuff, I was really excited. It’s a total happy accident. 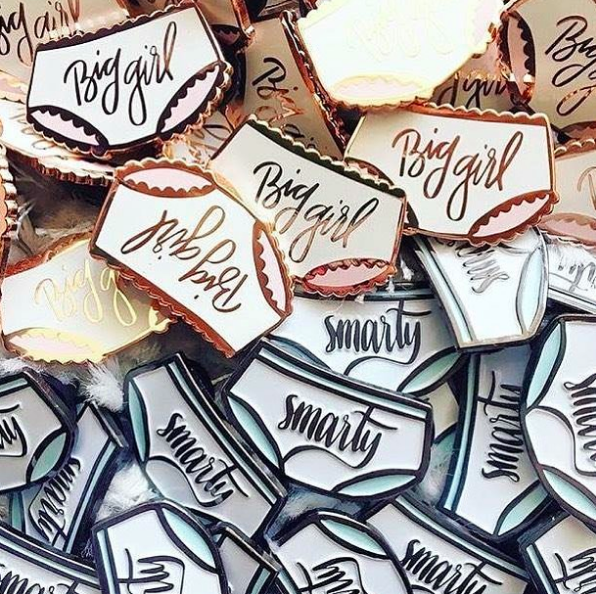 You started the club in 2016 and it’s already grown so much. Talk about an overwhelming experience!

Just thinking about it still makes me cry. To watch the numbers climb on social media was insane; we got 100 followers the first day. I just thought that was so amazing. Then we hit 2,000 a couple of months later. Kelsey Daro from Buzzfeed posted posted one of the pins, so we got 300 or so followers from that in just the first couple of hours; HelloGiggles featured two pieces in a gift guide. I remember thinking "Oh crap, this is happening. I don’t think they know I'm not qualified for this."

Do you struggle with feeling qualified?

I’ve begun to project that I’m qualified. I remember about halfway through the first year, one of my friends told me they loved how confident I am and how proud they were that I was making all of this amazing stuff — and I started to say something negative to negate it, like it was no big deal and it’s just a hobby. But I didn’t; I paused and changed it. I’ve realized I need to accept and receive those things because I am confident right now, and I am doing a lot of things to be proud of.

I don’t have the degree that people value so much, but I take on every challenge and figure it out. I think I’m way more qualified than I was at the start, and I hope I never stop growing.

The Crybaby Club is all about expression, emotions, and being honest about mental health and illness — why do you think there is so much stigma around those topics?

People just don’t know how to deal with emotions. It’s almost a general understood concept that if someone’s crying it’s going to be uncomfortable for the person watching. I cry a lot and it can’t be stopped, so I apologize to everyone around me — not because I’m embarrassed, but because I can tell they’re uncomfortable.

There’s also different stigmas for men, women, and people in other marginalized groups. I think it’s part of the ‘"get things done" mentality that everyone has, especially in America, where we’re always moving and wanting big and better things, so there’s not really time to stop and feel things. Men are just taught to not do it at all. Women are the opposite. I know I need to cry, but it somehow sends out this beacon that "She can’t get work done because she’s upset," which is clearly not the case because I’ve been feeling things intensely my entire life and here I am. I’m not going to drain myself acting like everything is okay when it’s not.

Emotions and feelings have also ended up being being labeled as ‘feminine issues.”

Like it negates manhood or masculinity. That’s so dangerous and sad; I couldn’t imagine. We had a meetup last year and it was mostly women but a couple of guys came because I made them. We went around the room, introduced ourselves, said the last time we cried, and then told our favorite cuss word to balance out the intensity. So the girls were saying they cried like last week or this morning in their car and then we got to one of the guys and he said the last time he cried was three years ago when his dad died. It was mind blowing to me. I understand there’s a hormonal aspect to this as well, but it’s just so sad because he had to have things happen to him and he’s not crying about it. There have to be men out there who want to cry and need to cry, they feel like they can’t so they don’t. Makes me want to cry, ironically.

So taking your advocacy for expressing emotions regardless of gender, how does this impact you raising your two boys?

I had children when I was 21 years old. I have such sensitive-souled children. I’m shaping them to be well rounded men who feel things. As a mother, I’m not afraid to take my child to a therapist or sit with them and talk. I’m laying the groundwork for my children to feel comfortable coming to me and talking to me about anything. I don’t even think about their gender when I’m raising them at all because it doesn’t matter; they feel things too. Boy babies aren’t born not crying, but somewhere along the line girl babies were taught that it’s fine and boy babies were taught that it’s not. I don’t play that with my kids.

What do you hope to see for the Crybaby Club in 2018 and what can we expect?

I want to see a more diverse audience by making sure people know it’s an inclusive and intersectional community. I want to continue working on breaking down the stigmas that are associated with crying, mental health, and mental illness. I want to put a lot of energy back into the people who supported and believed in me by introducing more community work. I want letters and emails from people so I can tell their stories. I’m starting a Youtube channel and redoing the blog. For the financial aspect, I would love more wholesale accounts in order to keep the business going and growing, but I want to put most of my free time and energy into community building because that’s really what it started out as anyway.

If you like this article, please share it! Your clicks keep us alive!
Tags
Crybaby Club
Natalie Meagan
emotions
cry
Crying
feelings 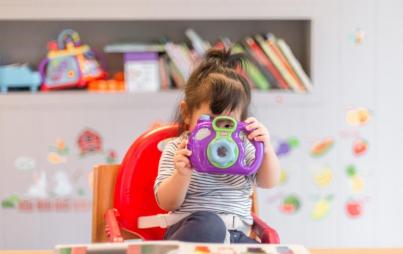 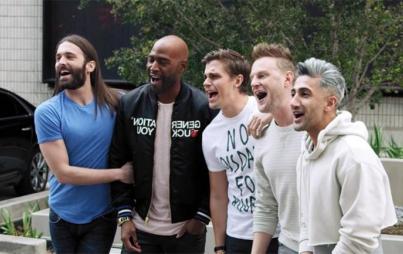 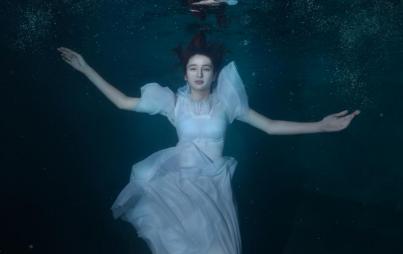 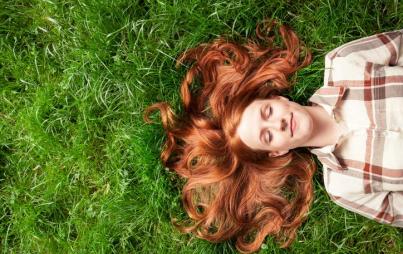