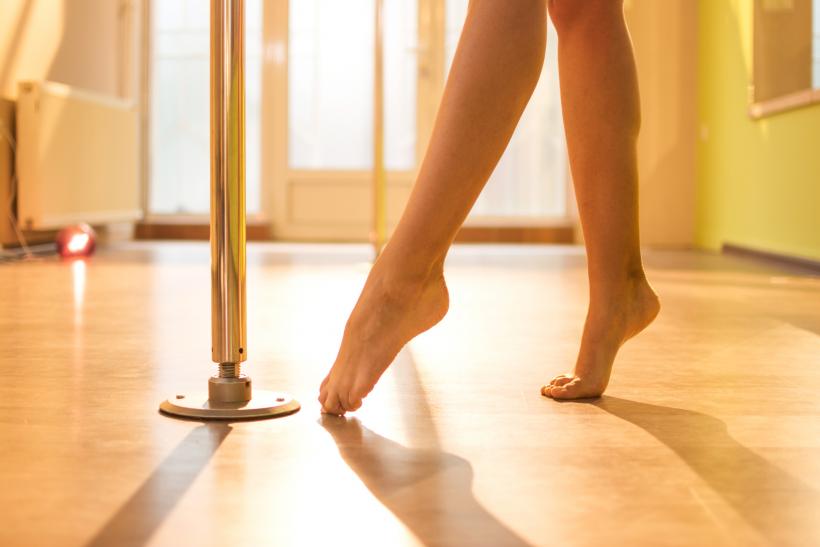 How I lost and found myself through pole dancing after becoming a mom.

“Uh, no, thanks,” I said to my husband Ethan, removing his hand from my waist, “I feel gross.” It was Saturday afternoon, a time in the past when we would have made love, but I had just breastfed our son to sleep and was not in the mood.

The truth was: I didn’t want him to touch me. In the two and a half years since our wedding day, I had morphed from a size 10 Joan Holloway type to someone much larger.

I started out with eye-rolling skepticism, not wanting to align myself with the kind of dance meant for men. But when the teacher encouraged us to touch and own our bodies, notice where we held our breath, pay attention to what brought us to life, I felt empowered.

Right after our honeymoon, we got pregnant on our first try, which felt miraculous given I was 39. We heard the heartbeat, told our parents, picked names, but then I miscarried. I was devastated. By the time we conceived again, I was up 20 pounds. I was so consumed with the fear of losing another child that I turned to vanilla malted milkshakes. When the cashier at the local ice cream store asked me if I wanted a punch card, I knew I had a problem.

After our son was born, I was up 65 pounds. Instead of freaking out, I reassured myself that I was blessed with a healthy boy. My body was incredible. It had grown a human being and was now feeding him. So what if I wasn’t Mad-Men-vavoom anymore? Still, if I saw someone I hadn’t seen in a while, I felt obliged to blurt, “Yeah, I know, I’m huge.” Some looked at me and nodded. Others, trying to be kind, offered up a cheerful, “Well, you seem happy,” which I took to mean I looked fat. 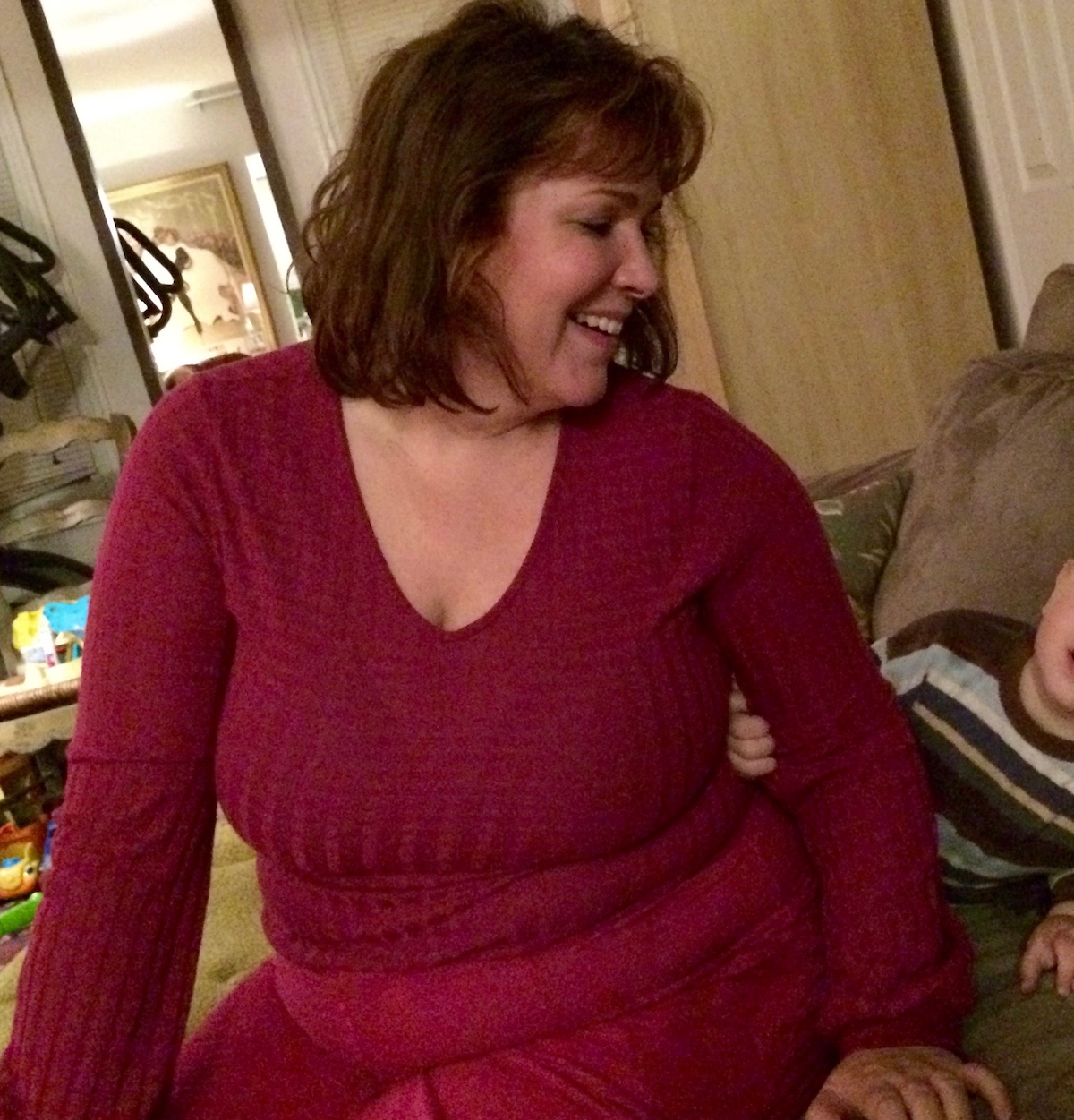 On Mother’s Day, Ethan handed me a card thanking me for all of my hard work — for fighting to breastfeed, for sleeping in three-hour chunks, for giving him a family. Then he handed me a gift certificate for an eight-week pole dancing series. He knew pole dancing had ignited a personal revolution six years before after a broken engagement.

The first class I ever took at Sheila Kelley’s S-factor in Chelsea was a favor to a friend who wanted to win a pole. I started out with eye-rolling skepticism, not wanting to align myself with the kind of dance meant for men. But when the teacher encouraged us to touch and own our bodies, notice where we held our breath, pay attention to what brought us to life, I felt empowered. Combining yoga, ballet, Pilates, striptease and pole dancing, S-factor’s workout gave me a strength that shocked me. After six months, I had abs for the first time in my life. More importantly, the assignments helped me figure out what I wanted, what I liked, what turned me on. Ironically, pole dancing had brought me deeper into myself and made me feel beautiful inside out. 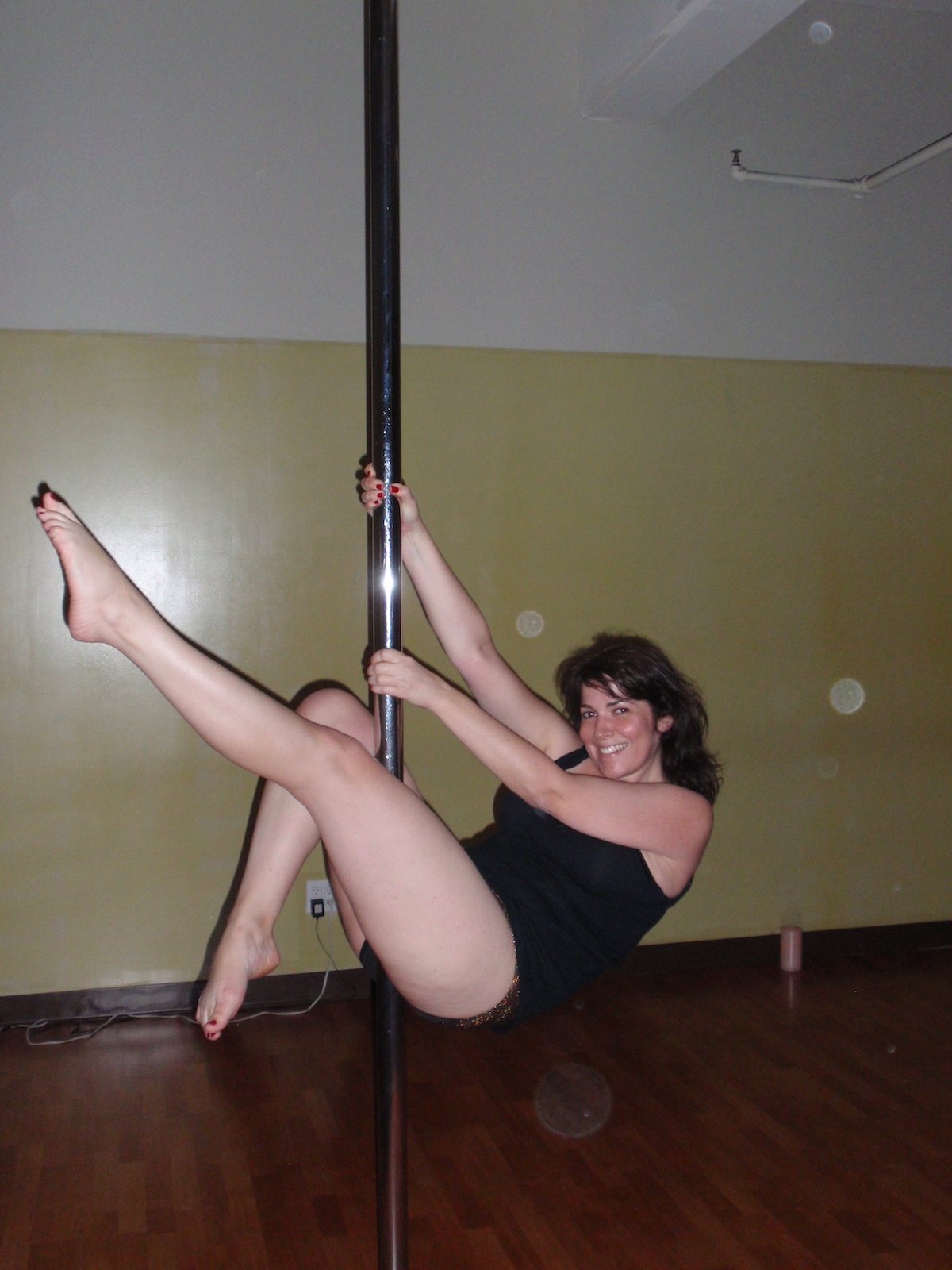 As much as I missed it, I was scared to go back.

My C-section recovery had been long and hard, and breastfeeding had kept me perpetually on the couch. Still, I took a deep breath, grabbed my gift certificate and headed down 23rd street to the studio.

It was Friday at noon, and my teacher, Cat, with her black hair and deep voice, asked us to introduce ourselves and set an intention. I scanned the room. Flat stomachs. Firm butts. Strong arms. Most of the women were wearing short-shorts and tank tops. One was wearing black leather boots and straps tied around her thighs. I was in yoga pants and a long T-shirt, trying to cover up.

“My goal is to not spend the entire eight weeks hiding behind a chair,” I said, wishing I could still fit into the skimpy outfits I used to wear to class.

Cat asked us to start on our bellies as music blared in the dark. I hadn’t felt my stomach against a hard, flat surface in almost two years. I tried the core exercises but petered out quickly. I didn’t even risk a push up.

Then it came my turn to dance. I chose Alex Clare’s “Too Close.” I had Shazam’d it during a video game commercial, and thought it was sexy. I leaned against the wall, shut my eyes again and tried to let go. “They’re not judging you,” I repeated to myself, hoping they weren’t looking at me and thinking, “Who does this fat girl think she is? Has she looked in a mirror lately?” I wanted to scream: “Yes, leave me alone.”

At the end, Cat took me aside and told me told me how good it was to have me back, and then asked me about my song choice, which is usually code for: “You didn’t seem connected to your body or the music.”

Dejected, I headed home, breastfed my baby and then searched through my entire iTunes library to find a song that sparked me. It had been so long since I had thought about myself, or what I wanted.

The following week, wearing a long, flowing dress, I danced to Florence and the Machine’s “Heavy in Your Arms.” I took deep breath, closed my eyes, and let her haunting voice, low and slow, move me. The electric keyboard reverberated across my skin, like a rock dropped into a still lake.

I was a heavy heart to carry

My feet dragged across the ground

And he took me to the river

Where he slowly let me drown

The song began to crescendo, building to a booming, hard beat of the drums. I was released, and raged like a wild flame across the room. When the song was over, I collapsed onto the floor, out of breath and smiling.

Cat walked over to me afterwards, tears in her eyes, and said, “Now that was a dance. I saw all of you. Who you used to be. Who you are now. Who you will become.”

A classmate, who watched and cheered me on from the bench said, “Wow, that was gorgeous. You’re a goddess.”

After class, I stepped into the midday sun. My shoulders dropped back, and my hips started to sway.

No more hiding. No more shame.

I let go of my own judgment and felt the weight of the past few years falling away.

That night, I placed Ethan’s hands on my waist, ready to be touched.

If you like this article, please share it! Your clicks keep us alive!
Tags
pole dancing
motherhood
postpartum
postpartum body
body image