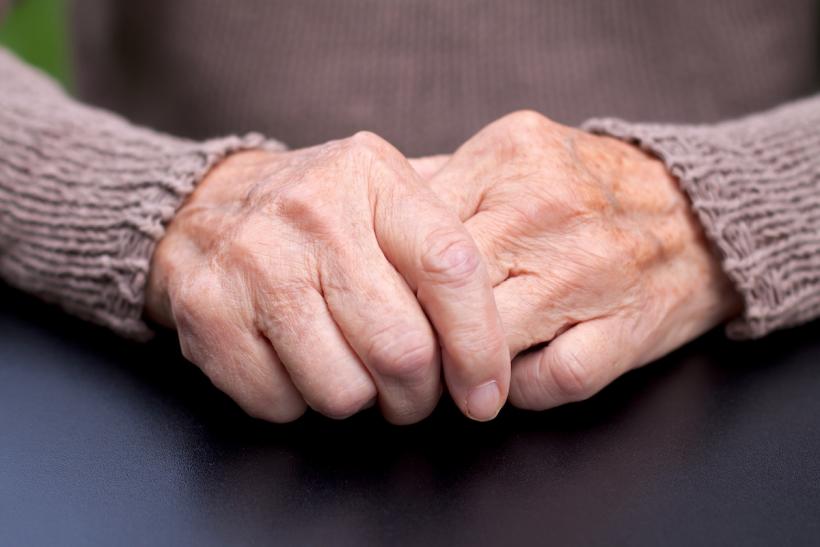 My mom helped me find the balancing point between caretaking and controlling because she insisted on her autonomy. “I don’t need your help in the shower,” she’d say, “and I can dress myself.”

We play a lot of card games in the summer. It’s part of our ritual, along with renting the same cottage every year at Barnegat Light, “down the shore,” as they say in New Jersey. Even though we moved abroad seven years ago, we return to this rental house like nesting birds, and my mom — the one who taught us all how to play cards — joins us so that we can try to cram a year’s worth of visiting into one never-long-enough week.

We arrive at the house with all the apparatus of summer life in tow: beach chairs, boogie boards, coolers, and towels. But this year, my seventy-six-year old mom brought a wheelchair. “It’s not permanent,” she assured us (and herself), “but it helps me get around.”

Fifty years of rheumatoid arthritis have so compromised her lower spine that she now suffers from spinal stenosis (a narrowing of the spinal canal), and her sciatic nerves are in a constant state of compression. When she tries to walk, she white-knuckles her cane and clutches for a chair after a few steps, grimacing with effort.

Her obvious pain and her ferocious determination not to complain made me want to do everything for her.

I’m the bossy oldest child, quick with a joke and according to my siblings, also a total control freak. They’re wrong, of course. I’m not a control freak — I’m just want to fix people’s problems. My mother’s problems were beyond my fix-it abilities, however, and almost beyond my ability to make jokes. All I could do was try to create a version of the summers we always had and find ways to balance my desire to smother her with caretaking and to respect her (newly fragile) independence.

Before she arrived, I warned my teenage sons that Grandma would be moving more slowly than usual, but I didn’t listen to my own cautions. Even though Mom had told me about her health problems during our Skype conversations, I wasn’t prepared for the realities of her shuffling walk or diminished energy. Her condition meant that instead of long beach walks, we plunked her wheelchair into the car and drove to the long promenade near the lighthouse channel where we laughed about the fact that at least her wheelchair entitled us to priority parking.

As I pushed her along the walkway, we had the same far-ranging conversations we always had, about everything from politics to family gossip — but we both missed the arm-in-arm intimacy of years past.

To get Mom out onto the beach, we rented a “dune buggy” — a wheelchair with huge tires — so that she could watch my kids bodysurf. My boys are almost seventeen and almost thirteen. Their skin hugs close to their bones, and they move easily, efficiently, with heartbreaking grace. Every time they walk away from us towards the water, I see that their bodies are now closer to the men they will become than to the babies they once were.

“Yes,” my mom said, “that’s how it goes. It’s like double vision. You see the baby and the adult at the same time. I do, even now, with you.”

Surrounding us on the beach were families with young children, and for a flash, I missed the solid joy of a cuddling a small body wrapped in a towel. I remember the bone-deep exhaustion of wrangling two sticky, sandy children. As the boys pull away from me towards the next stage of their lives, I find myself missing those little-boy days when their need for me seemed clear and uncomplicated. These days, I feel myself standing on the outside looking in, trying to decipher the emotions they cloak in monosyllabic adolescent grunts.

That summer became the fulcrum of a seesaw: as my children need me less, my mother needed me more.

I taught my kids to be independent, but this summer I realized that I also want them to learn about the nature of dependence. When they were young, they didn’t know that I was “caretaking.” They only knew that someone was there with a sandwich, a steadying hand, a band-aid, and a kiss. Now they are old enough to see that caretaking is something to practice, so that compassion becomes a graceful habit rather than an unwanted chore. I want them to understand that aging isn’t something to be feared and that “infirm” doesn’t mean “finished.”

In turn, my mom helped me find the balancing point between caretaking and controlling because she insisted on her autonomy. “I don’t need your help in the shower,” she’d say, “and I can dress myself.”

But I worried. What if she fell in the shower or stumbled in the bedroom?

The edge in her voice reminded me of how my children asserted themselves when they were young. They too wanted privacy. It was their badge of being a grown-up, of not needing me every step of the way.

During our evening card games of “Hearts,” I’d tease Mom by asking her if her arthritic fingers could handle the cards. It’s the same question I used to ask the boys when their chubby toddler hands would send the cards spraying to the floor. I got the same answer: “I can do it.” Unlike my kids when they were young, however, Mom plays a wicked game, honed by years of practice. She knows how to manipulate each trick and cackles with glee when she sticks someone with the Queen of Spades or takes the Jack of Diamonds for herself.

The laughter around the table, the slap of the cards, the inevitable bad renditions of Juice Newton’s “Playing with the Queen of Hearts” — all of that was the same this year as in years past. But my sense of being on the balancing point of an inevitable shift remains with me. The boys are growing up, getting ready to leave home, and in an uncomfortable parallel, my mother’s infirmity reminds me that she too may be closer to leaving me than I want to admit.

Our card games could become easy metaphors for the fact that my mom is still the queen of our hearts, but instead, I will play a different metaphor: when I took my mom to the airport at the end of her visit, we both forgot to bring her wheelchair.

If you like this article, please share it! Your clicks keep us alive!
Tags
arthritis
aging parents
aging
caretaking
parenting
letting go
families